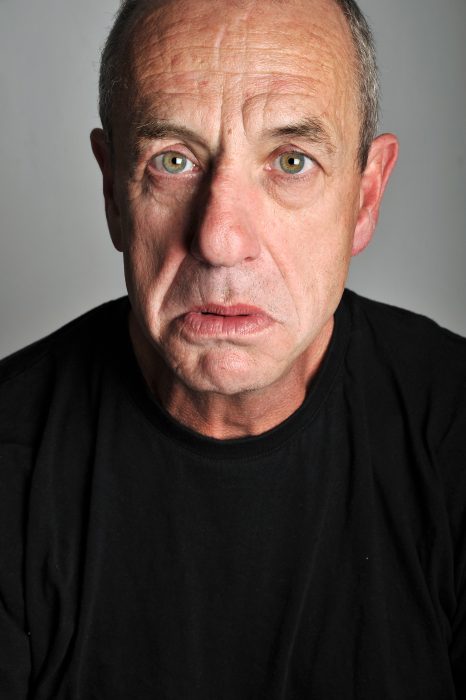 Paul Clarke meets legendary stand up Arthur Smith as he prepares to be At Your Service in Hebden Bridge.

You will know Arthur Smith’s doleful South London tones from numerous TV voice overs, and appearances on Radio 4, but he is also one of our greatest stand-up comics much loved by his peers and audiences.

He’s back up north with his one man show At Your Service for a gig at Hebden Bridge Picture House on Friday 1 July, but despite his long years in the spotlight he keeps it simple in the quest for laughs.

“It’s about making people laugh and moving them,” says Arthur, “The show I’m doing in Hebden Bridge is my regular one man show – gags, anecdotes, poetry, maybe a bit of singing – and I’ve got Leonard Cohen coming so he’s going to do a song. Who knows what might happen.”

Arthur agreed to do this Hebden Bridge Arts Festival gig because he has tramped the hills round this bohemian Pennine town as in late middle age this proud Londoner has donned his hiking boots to become a hard core rambler.

“I am a city boy obviously, but I’m like the Romantic Poets these days as I feel a certain connection with the countryside when I am on the hills, Walking itself is good for thinking as Nietzsche was always rambling,

“I gave up football and cricket as I was too fucking old and couldn’t be arsed to organise them and show up.  My running career is long gone, although I used to run for London Schools in my day as I was quite a useful runner, but I then discovered fags, drugs and women.”

Arthur started his stand up career back in the 1980s with a laid back observational style in stark contrast to the angry ranting about Margaret Thatcher that propelled some of his peers to stardom.  Despite a busy touring schedule Arthur managed to assemble a cricket team made up of a motley crew of celebrities eager to go into bat for him.

“I used to run a cricket team with a load of comedians and some quite eminent names played in it – Hugh Grant, Bill Bailey, Alan Davies, Ainsley Harriott and Nick Hancock were all in it.

“We used to play a team who were specially selected to be slightly worse than us, but we still got beat quite often. The barracking and sledging was what we were good at.”

The charming, floppy haired actor had played for the first eleven at his posh school, and became one of team’s stars before his career took off when he starred in Four Weddings and a Funeral.

“Hugh was a decent cricketer as a solid, useful public school type opener,” recalls Arthur.  “Nothing extravagant, but he hit a fifty once or twice. Then he went to America and I haven’t seen him since then, but Elizabeth Hurley came along once and she was rather striking.”

Arthur is now seen as of the true pioneers of stand-up paving the way for some of today’s big names, like Peter Kay and John Bishop, to play stadium gigs instead of pub backrooms. So it is ironic he is now best known for moaning about the collapse of British culture as one of the Grumpy Old Men on the surprise hit BBC TV series.

“I did that when I was around 50 and when you hit sixty you are too old and grumpy to be on TV,” laughs Arthur.  “It was fun, they just pointed the camera and said say what the fuck you want about what annoys you.

“When I first did it I thought it would be on BBC3 at two in the morning, but then, bang, it was all over BBC2 so I was quite surprised. It would seem you never know the thing you are going to be known for. Look at King Alfred everyone thinks of him burning cakes, but he did loads of stuff.”

Arthur is the self-styled Night Mayor of Balham as his evening job tends to make him a late riser, but does this proud Londoner think there is a comedy north/south divide?

“There is not much difference, but I like Northern audiences as sometimes in London they think they have seen it all, but the people out there are more out there.”

Arthur Smith plays Hebden Bridge Picture House on Friday 1 July. Tickets are available from www.hebdenbridgeartsfestival.co.uk or in person at the Town Hall in Hebden Bridge