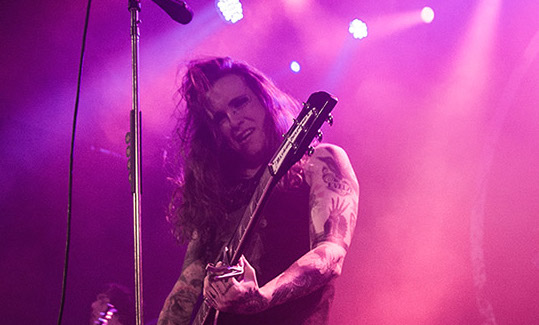 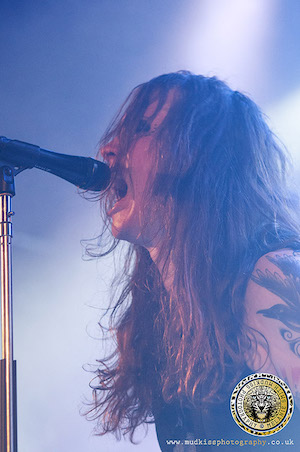 This year Against Me! have shaken the foundations of the punk world with their inspiring, provocative and moving record ‘Transgender Dysphoria Blues’, which is deeply personal to their lead singer, who is currently going through her own transition. So, only a day into their UK tour, Louder Than War’s Sophie Sparham caught up with Laura Jane Grace in Birmingham to find out about the new record, what it feels like to play the

All photos of Laura Jane Grace on this page by Melanie Smith from the recent Manchester  show. Her portfolio can be found here: mudkissphotography.co.uk.

Louder Than War: Let’s reverse the clock a bit, what festivals have you really enjoyed this summer?

Laura Jane Grace: Hell Fest was one that really stuck out to us, we’ve never done it before and we were on the punk stage and it was really well organised and a way bigger production than I expected – I don’t know why! Download was great, we literally had to drive a total of sixty hours to and from Download for a half an hour set, that’s why when there was a fuck up with this tour and we had to cancel the European dates, we said that we couldn’t cancel the UK, because we did that drive for fucking download and it was a really good set!

I’ve never seen you in the UK before, what do you think about it, do you like touring round here?

I love touring round here, so many English punk bands were so influential on me so I’m cognisant of that and it’s so easy to get around, because there’s no language barrier or anything like that and I like the culture, I like the people and I like the shows.

When you say English punk bands influenced you – which ones?

I think obviously everyone who’s getting into punk rock like the Sex Pistols and The Clash of course but I really like the English Peace punk scene like Crass, The Mob, Mega Tribe, Zounds, Flux of Pink Indians, Poison Girls, like all those bands when I was 16 they completely shaped my world and my politics in a way that I still to this day live with. Even the Levellers, who are playing next door to us tonight, when we pulled up last night outside and saw the tour bus and was like. ‘Who’s that?’ And they said ‘It’s the Levellers’. I was like ‘holy fuck, I love the Levellers!’

Obviously the tour is all about the new record, but where were you when you decided to discuss this subject?

It kinda doesn’t really work like that, I try to continue to stay writing so I don’t fall out of practice. So when we finished our previous record ‘White Crosses’  I just kept writing and the songs that I was writing were focused on a very specific subject matter and I didn’t particularly want to be writing about that but that’s what I felt passionate about and that was what was motivating me to write, so I think in a lot of ways, it was my self-conscious pushing me forward with that. After I got to a point where I got to five or six songs and was like ok, this is where I’m heading with the album, like it started coming to me conceptually, I got the name ‘Transgender Disphoria Blues’ and I decided that was what the record was going to be focused on, that was what was happening to me personally.

It’s an amazing record, did you ever get worried about how it was going to be perceived with your being so honest?

The honesty of making the record was so arduous in a way that that wasn’t even a thought. At first I even did a couple of interviews where I said it was about another character as I was trying to shift that it was personal off of me, so I definitely was nervous how people would take it and how my band would take it also. But at the same time I wasn’t writing for those reasons of ‘I really think this is going to be commercially successful’! That wasn’t my fucking concern. I was writing because that was my passion and my outlet for dealing with whatever you have to deal with in life. Especially going into it with the band falling apart, losing the drummer and then Andrew leaving and not necessarily knowing if there was going to be a band when we were done making the record, there wasn’t a lot of time worrying how it was going to be perceived, it was more the case of if we could just finish it. 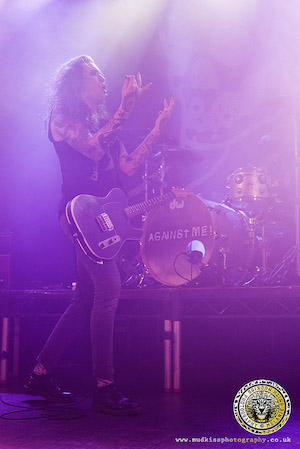 Well it all worked out in the end.

Yeah it did and I feel really lucky for that and I think in some ways the band is better than it ever has been and that I’ve been having more fun than in a long time. You know, just touring and being a band. A lot of that is me letting go of my personal shit and being able to be happy on tour, as I spent a lot of time being unhappy on tour. It just feels good and feels fun.

How do you feel playing the new songs on stage?

It feels great and seeing people react to them there’s those surreal moments for you, like standing up there and playing a song like ‘True Trans Soul Rebel’ or something where you see this crowd of people scream back ‘Does God Bless Your Transsexual Heart?’ and the 13 / 14 year old you is like what the fuck is happening?! Is this real?!

Something else that I think is awesome about the record is songs like ‘Black Me Out’ which is obviously about your journey but it can relate to so many other things in people’s lives.

Well that what I really hope people realise about the record. If people are maybe put off by the idea that this is a record exclusively about being trans or something like that, I think the underline subjects of feeling isolated, feeling alienated, feeling like you don’t fit in, feeling uncomfortable with your body, those kind of feelings dealing with addiction, suicide are way universal and not just exclusive to the trans community.

It just seems like a natural progression from your past records.

In the past records there were always songs about gender dysphoria, it just wasn’t made apparent.

Was Ocean one of those songs?

Of course, there was no metaphor in that song, it was as blunt as you could be! At that point, I felt how far can I say this, how direct can I be without someone saying that to me? I remember singing it in the studio and asking if it was cool and everyone said it was great.

You also worked with Fat Mike on this record – what’s he like?

It’s Fat Mike, he’s one of a kind! I‘ve known Fat Mike for nearly ten years and I love NOFX. Maybe my second show ever was a NOFX show and we put out records on his label and we’d toured with the band a whole bunch. The way it came about him playing on the record, was that I’d built a studio to record our record in and some of it was recorded there, but at some point a tree fell on it and destroyed the building so we had to find another studio to record in.

You’ve been a very busy lady, you’ve also recorded an AOL TV series called ‘True Trans’, can you tell us about some of the people you must have met on that.

Yeah, and incredible conversations to have. I came out of it feeling like I didn’t even care if other people saw it, just knowing that I got to live it and talk to those people meant enough for me. I recently watched a couple of episodes. They were really inspiring people and going into it, I was in a place where I needed that.

I think the reason why this record is so so important is because there’s still so much injustice and prejudice in the world that you need someone like you guys to say “no, fuck this”!

Well everyone has to do that, everyone has to say fuck that we need to do it this way. But that’s what’s great and one of the things about playing shows which is really inspiring to me is I assume that everyone is on the same page. You know, they know about me or whatever. They’re not going to come in there and be like ‘wait, what the fuck?!’ So going places and playing for a couple hundred people and knowing that there are at least a couple of hundred people in this city that get it and hopefully if they see someone doing something fucked up in their everyday lives, being transphobic, homophobic, racist or whatever, that they’ll say something. So that’s what you hope and that you’re reaching people on that level.

And finally, I know it wasn’t intentional but do you see yourself as a trans spokes-woman?

You can find Laura Jane Grace on Facebook and she tweets as @laurajanegrace.

Find out how to acquire a copy of Transgender Dysphoria Blues on Against Me!’s website: againstme.net. The band are also on Facebook and Tweet as @againstme.