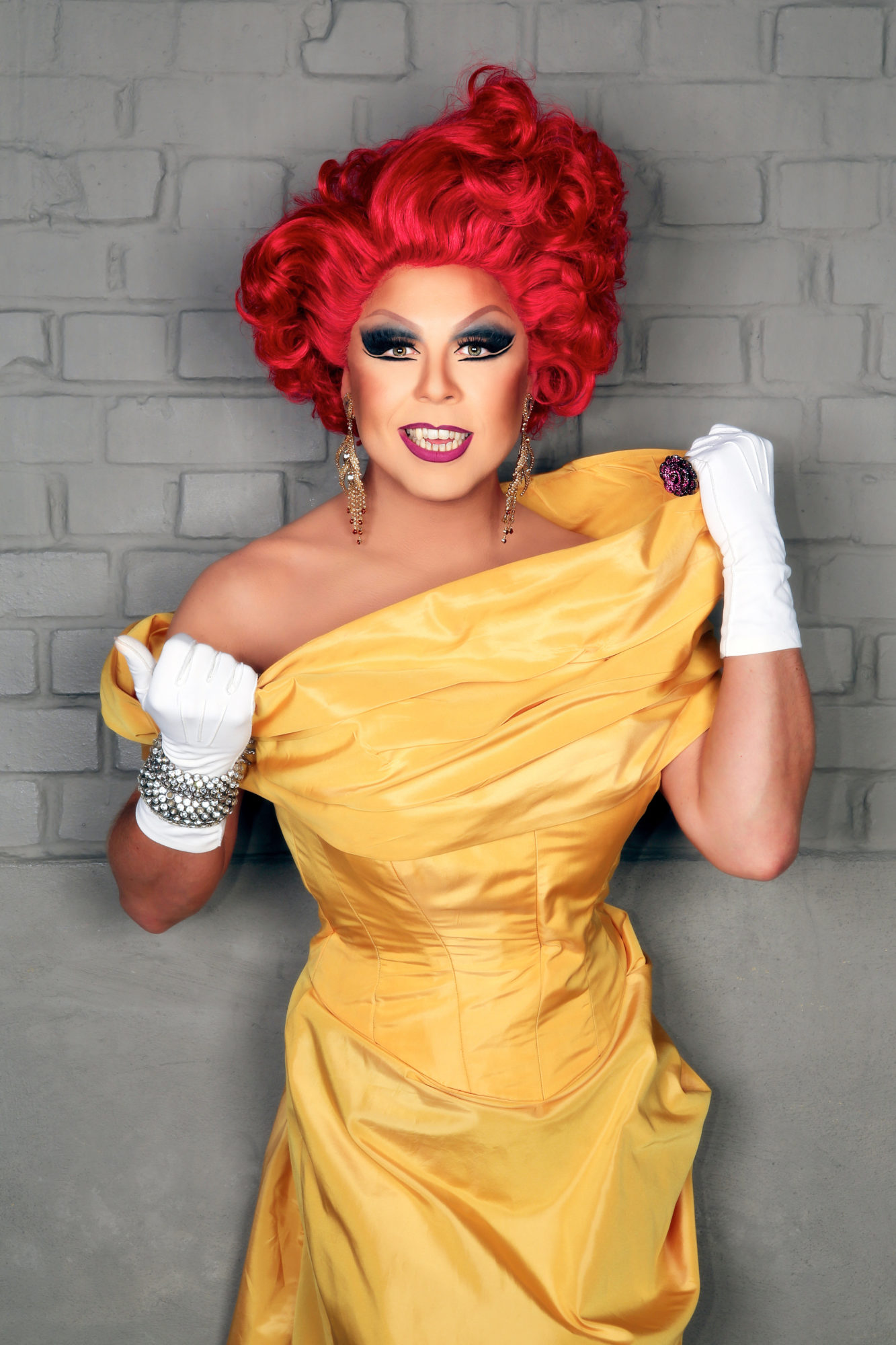 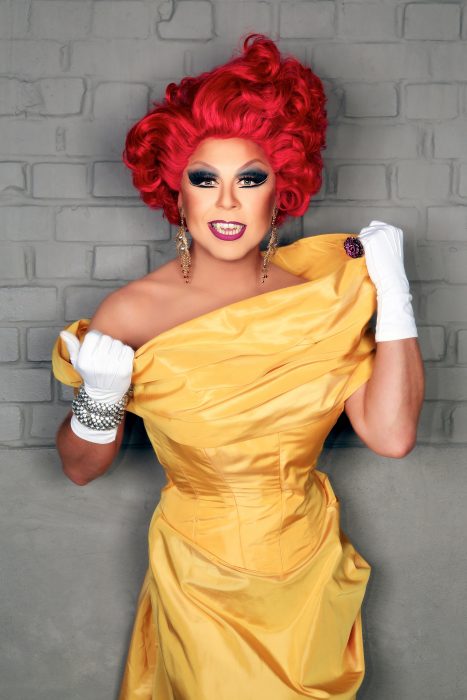 Just as the British invasion changed the world of pop/rock music, the British drag invasion is about to change the world of drag, via, the talented, enchanting and sparkling Queen, “La Voix”. Making her New York debut on May 19th at The “Triad”, with a show very different from anything one has seen before.  I was able to speak with the glittering queen about the epic contents of the show, as well as her future plans and her recent successful triumphs.

La Voix will be appearing in this summer’s hit movie AbFAB. She was a semi finalist on “Britan’s Got Talent”, and “Ru Paul’s Drag Race UK Ambassador” as well. She will also be appearing on London’s West End…..

Louder than War Where are you from?

I’m calling you from Greenwich, which is south of London, originally I’m from the north of England.  Are you New York based?

I am, and I’m so excited that you will be arriving in New York!

Tell me something about the show?

I’ve been performing over here, in the UK, for about 10 years now. It’s always been a pipe dream to get over to America to do some gigs. I was very lucky because last year I started working for Atlantis cruises. It was then that I began to get seen by a lot more of an American crowd. That’s how it’s all come about really. It’s at the triad theater, on 19 May…gosh it’s not long…..

I love British queens with my whole heart.

It’s really hard for us to get work over there, especially with Ru Paul’s Drag Race. I think that there is a bit of resurgence in drag  in New York. It’s very hard to pitch yourself to any venue, that’s willing to take the risk of somebody international. My show technically it obviously is drag, it’s more of a cabaret show, with live singing, and live music, and that’s something I’ve always tried to stick to. I keep it very classy and very glamorous, and keep the high end up, really. So the show will be exactly that. A local New York pianist Brian Nash, who is a regular to a lot of cabarets down there, will accompany me on the piano, and it’s “La Voix’s Diva Breakdown”. I don’t mean that as in I will be having a breakdown, so basically I will be analyzing and exposing, satirically putting them under a microscope, the famous gay diva’s, such as Judy Garland, Liza Minnelli, we will look at Cher, we will look at Shirley Bassi from over here…. It’s not strictly an impersonation, it’s much more sort of dissecting them. We will be analyzing every tiny gesture and movement, and taking it one step further, and teaching the audience this is how you do Judy, this is how you do Liza, and sharing with them. My idea is that you can go to a party after seeing the show and drop into the best Cher or Judy Garland impersonation that anyone sees.

Wow….that sounds like it took an extreme amount of work to prepare.

It is and it’s fun. It’s done very casually, a lot of it is improvised. I take ideas from the audience. I have a section where I will do songs that you will never hear Liza sing, and people will just shout out songs….Brian is such an amazing pianist and can just bust out anything. There are some hilarious things that come out of the back of those. Some almost become stable numbers from my show. There’s a lot of audience interaction, it’s very informal and relaxed, have a drink, just sit back and let’s explore this together….which is lovely.

That sounds like a blast….so how do we keep you here?

I would move there in a flash. What’s good is that after New York, in July the show is going over to the  London’s “West End”.

That’s a big deal! What clubs do you work in over in Athens UK?

I’ve worked at the “Ivy Club”, I opened at another club for Spandau Ballet…that was insane…it was Tony Hadly who rang me himself…and I perform at a lot of the gay Cabaret bars, in Soho and South London. I have a residency Manchester once a month, Birmingham is another good city…..it’s great fun.

I know the Americans drag etiquette, but not so much in the UK, do you have drag mothers there?

What made you decide to do drag?

I think that’s a question that none of us know the answer to. I was working as an actor at a few “West End” shows. I auditioned for a regular slot at Madame Joe Joe’s, I didn’t know it was for drag. It was to sing every Saturday. I got the job, and they said it needs to be in drag, I said “I don’t mind, but you’ll have to show me how”. They did, and that’s how it started. It was great. It’s something that I never intended to do, but when you get on that bandwagon it’s just so creative. As a male actor you get to sing all the girl songs that you could never sing for auditions. Then luckily ” Britain’s Got Talent” started over here, and the more commercial it got, I could do it full time.

What do you find to be the hardest part  about doing drag?

I suppose when I started doing it full-time, I didn’t expect it to be like working a night shift. Your gigs a very late, it might be 11 o’clock to midnight, or one in the morning, and all of a sudden that might be four or five nights a week. Then you got to get up and deal with invoices and bookings, you’ve got to make costumes, or get your wig styled. …..even basically like wash your tights….you eat, you sleep, you have a shave, and it just becomes a bit of a conveyer belt. I didn’t think it would be so all encompassing. It’s great, but you have to just stop and have a day off. You almost start to hate your own alter-ego. It becomes your own nemeses really. You have this woman who takes over everything in your life. You need a bigger apartment.

Do you feel like you are leading a double life?

Definitely! It’s funny because I’ve worked in venues and some don’t even know me as Chris. The transformation is phenomenal.

You have something else very special to promote, don’t you?

You mean the AbFAB movie…isn’t that exciting? I got an email from a casting woman, months and months and months ago, asking for some pictures and videos of mine. We never heard anything back. Then I got a call in the middle of doing a pride show in Barcelona. I got a message from my manager saying “do not drink tonight….I have to fly you home in the morning you’re in the AbFAB film” he was petrified that I was going to stay out all night and not behave. Jennifer Saunders had approved the video, that was enough! It was filmed just before Christmas. It was one day, very long day of filming. I had to be ready and dressed as  La Voix  by 6am. I play a club singer and I get to sing a song. It’s a great little scene. They were all there, Joanna Lumley, Jennifer Saunders, all the cast, and they were just so adorable. They were so encouraging. If I did something that was a little off script, they told me that was good, let’s work on that….it’s a small cameo part, and they were so embracing.

That is so exciting. How do people in the UK view drag?

Personally I always think that it’s looked at, well it’s probably changed now, I think Ru Paul was the turning point..sort of like the BC and the AD of the bible ….but I think personally it was looked down upon. It was a bit cheap, it was for a. Bachelorette party, it wasn’t taken seriously. But I think from the younger generation, it’s seen as a bit more avant guard, more creative now. I wouldn’t say it’s a recommended career line, but it’s certain,y embraced a lot more than it was. It’s changing over here, massively I think.

When you did, “Britain’s Got Talent”, were you in drag?

Yes I was. I was a finalist. I was the only drag queen to ever make it to the finals, which was great. Simon Cowell famously doesn’t like drag, and he was quite explicit about it. When I went on I had a 20 piece band, and a beautiful gown, very high-end, very legit. He seemed to like that.

If you could say anything to your fans, anything at all, what would it be?