This East London band, Kylypso first made some noise a year ago with their debut album, “Mean 2 U”, and now they are adding to the buzz with their new single, “Skies Are”, an electronic symphony regarding relationship’s highs and low points after the break-up. 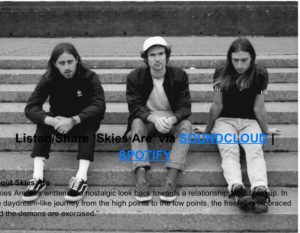 I spoke to this crazy, whimsical bunch about music, and I have to admit I’m not sure what else. They were a blast. Band member Rudi clutched his tiny orange dinosaur between his fingers, claiming it to be the group’s mascot, while Tom was full of seriousness and Hugh just shyly smiled a lot.

Louder Than War: How did you get together?

Rudi: I use to be in a band called Lurks. We were recommended to Hugh to mix one of our songs. He did a really, great job, and that’s how we met Hugh. After that I was in a band with Tom. Hugh started mixing our tracks and eventually just got more and more involved past the mixing process into the production. We just ended up asking him to be in the band. Hugh was pretty much doing some writing for us anyway.

Who wrote “Skies Are”?

Tom: We wrote it together. I think Rudi started the demo. That is pretty much how all the songs come about. Someone will start an idea and then we’ll get together and finish it off, or we’ll send each other projects or have a jam. Rudi’s room is right next to me so it’s really easy to write. But with Hugh we do it more remotely.

(I pointed to Rudi’s plastic dinosaur), Is that your little friend Rudi?

Rudi: That’s my mascot. This is my dad.

What were you thinking when you wrote “Skies Are”?

Rudi: It was kind of a nostalgic look back at the last relationship I had. There was nothing sad about it. It was like the idea of when you’re with someone you really like. Almost like that take over the world type feeling. The hook on ‘the “Skies Are” only ours’, is you can own the sky with that massive feeling. So it’s that and then about that relationship going wrong, and then the imagery of falling through the sky, just cause that was a cool picture.

Tom: I had no idea the song was about that.

Rudi do you have another girlfriend now?

Rudi: yeah, my girlfriend has got the same color hair as you, (mine is pink and blue by the way).

Rudi: We all live in London now.

Where do you guys see each other in five years?

Rudi: I’m taking over this….in five years I’d like to be on album two. That’s ages away, at least.

Tom: On album two with a couple of EPs in between. Just like musically explore the sound of it, where we are headed with it. I think that’s the great thing about any band.

Tom: We want to headline Wimbledon, or play The US Open.

Hugh, get yourself in there, they aren’t letting you speak.

Hugh: I’m quite ok with that.

Hugh what instrument do you play?

Hugh: I play keys and computer sense parts. I do a lot of programming. I’m on the right stages of the mix as well.

Tom what do you play?

Tom: I play bass, I sing, and bass synth as well.

Do you have a drummer?

Rudi: No. Our drummer is connecting you by skype right now. The computer. It is involved, but I play guitar and sing as well.

Tom: Most of the time Rudi is the frontman.

What would you want to say to your fans?

Rudi: Hi, how are you. We’d tell them to get out. We treat them even worse then we treat you.

Rudi you’re already in trouble, you and your little dinosaur.

Rudi: He’s got my back.( they then proceeded to name the dinosaur).

How did you create your name, I mean you’re not a Calypso band?

Rudi: It comes from Jaques Cousteau. His boat is called Calypso. We didn’t want to spell it the same as the music genre, we wanted it to be a little bit different so we used Ks and did our thing.

Rudi: Kevin Parker comes out and we do a Tame Impala song.

Tom: Yeah, that’s a good one. This is a little bit more realistic but we have a song called “Mean 2 U” that we put out, which is back when. It was just Rudi and I and Hugh mixing it. But at the start there is this big Harmony. I’d love to get a load of our friends from other bands up on stage with us and start it off like that. Sort of like a traditional choir. A load of friends doing that really well. I think that would be just really fun.

Tom: Basically our live show is Rudi and I talking absolute shit about nothing, whatever makes us laugh, while Hugh stands there cringing, hoping we could play the next song.