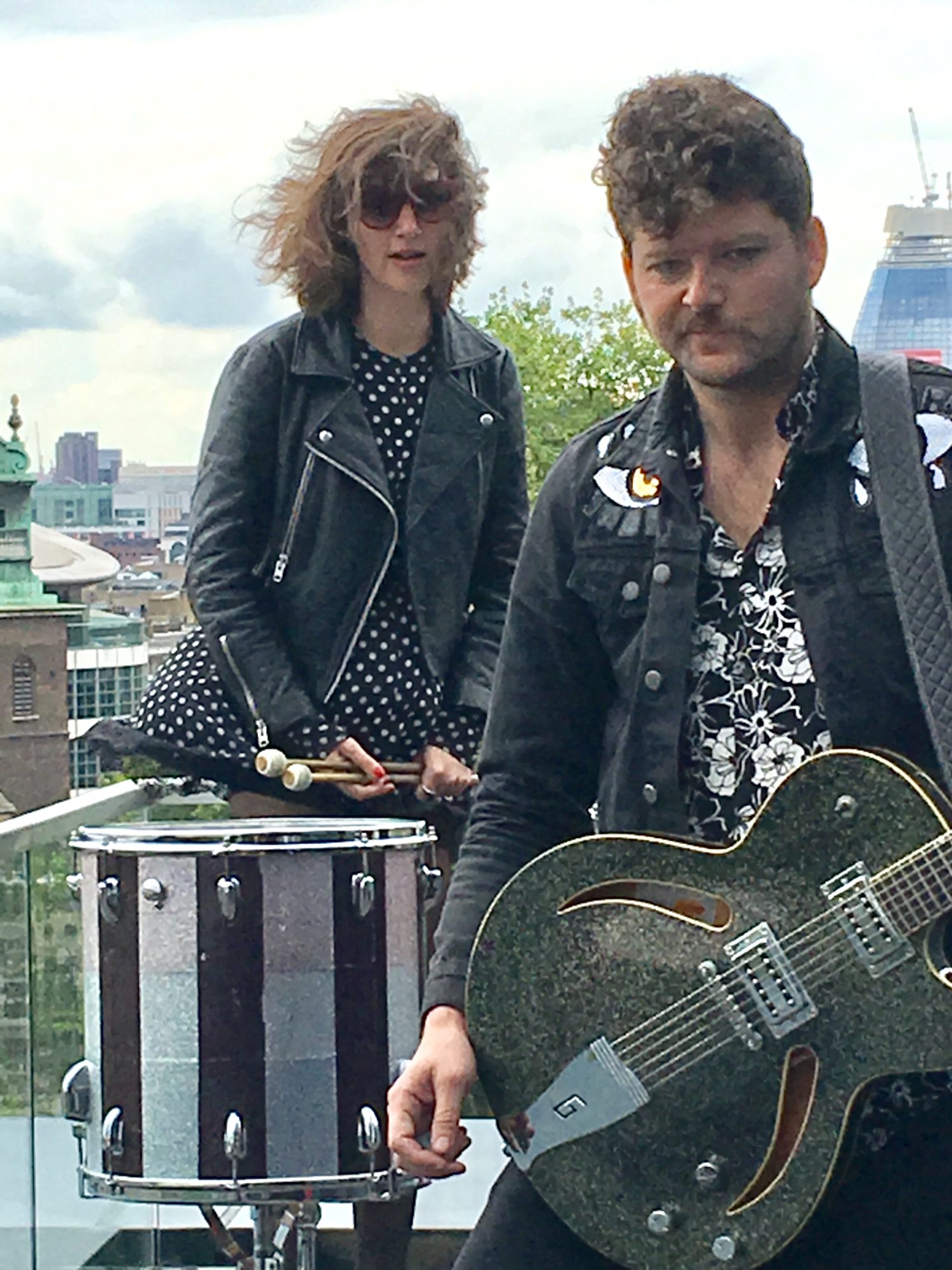 I met Lauren and Rob of Kolars, the high powered American sweethearts, and musical phenomena at Balcony TV, in London just before they were to appear, while in the midst of a U.K. tour. The Kolars are a husband and wife duo. They performed their newest single, “One More Thrill”, a fusion of titanic rock, pounding rhythm, experimental folk, country glamour, and salacious dance beats. 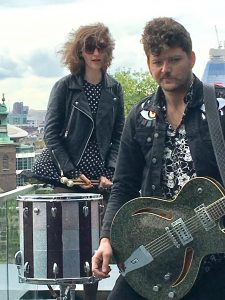 I instantly fell in love with their tantalizing sonics, and their energetic, apocalyptic marvel, as well as their genuine, authentic sincerity. Lauren tap dances whilst she’s playing the drums,  audaciously going wild, while glam rock husband Rob sings and plays guitar in the sexiest fashion. They are madly in love, and that fluorescent, jovial, thrilled contentment, manifests itself in their songs, exuding vitality and flamboyant effervescence.

Kolars have performed at “The Great Escape” in Brighton  and throughout the UK during May. Their new album release coincided with the London gig on 25th May at Thousand Island.

Louder Than War: I would love to hear your proposal story.

Rob: We were at the Secret Garden Party, and I had been carrying around this expensive diamond engagement ring, from her great grandmother, and always checking the pockets of my bag because I was afraid that I’d lose it, or that someone would grab it out of the bag. The day of the show I was pacing around, all day, nervous…

Lauren: But acting weird. I thought that he was mad at me, because he didn’t really wanna talk to me. He was really kind of stiff and strange…I wondered “What was Rob’s problem today”.

But you were so nervous Rob?

I was very nervous. I mean it’s a big deal, right? I told my sister, she was the only one that knew because she was in the band as well. She was the other singer. The band was called: “He’s My Brother She’s My Sister”. We were playing on this big wooden stage. It was a rickety, fun, big stage. There was about 1000 people there, and I was going to do it during this song, “Electric Love”, which I had written about Lauren. In the middle we break it down and we have the audience sing just the word “Love”. It’s very sweet. We had them singing, it’s all going great, and I pulled out the box, I snapped it opened, and the ring literally jumped out of the box, and flew across the stage, bouncing. There were cracks in the stage, we were practically tripping around while playing. The thing was bouncing, bouncing, and I’m on my hands and knees, the crowds singing and their wondering why I’m down on the ground….

And what were you thinking Lauren as this was happening?

Lauren: I had no idea what was going on. I was playing the drums in the back. I was doing my own thing.

Rob: So finally after 30 seconds of me rummaging around with the ring…luckily it hadn’t fallen through the cracks underneath the stage…I grabbed it, the crowds still singing, I’m like, “0k this is gonna work “, I go over to the drum set, Lauren still has no idea what’s going on. She hadn’t seen it , somehow, I don’t know why….I got down on my knees, and I held the ring up. I said, “Lauren will you marry me”? She just looked at me, and kept playing the drums. 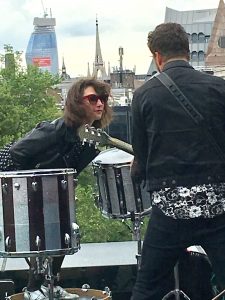 Lauren: I was just trying to be professional.

Rob: My sister Rachel was like. “Lauren, you can come down”. So she stopped for a moment  and took the ring….then we looked at each other…like, what do we do next?

Lauren, did you at least say yes?

Lauren: I’m not even sure that I did. The rest of the set I just in this weird dream…it was in the middle of the set and we had all these songs to play afterward. My head was in the clouds.

Rob: She got really angry at me after and said, “The one thing could you have not waited till the last song”?

How long after that did you get married?

Rob: It was a long time, like a year and a half.

So how’s married life since you work so closely together?

Rob: All downhill from there.

Lauren: Actually the marriage has been pretty good.

Rob: Actually being in this band together, it’s a good time. We had some trouble in our previous band, but not with us. It got ugly as bands do.

Lauren: They actually missed their significant others…and then we were together…

Did you know each other before the band?

Rob: We did, we met in New York. Lauren was going to school with my sister, but apparently I was a player, and I broke her heart.

Lauren: I fell in love with him! The moment I met him. I was only 18 years old and he came in. I remember the night, he came walking into the bar. I remember how I felt OMG…this was love at first sight. At the time he had 5 different girlfriends.

Lauren: But the night we met we ended up talking all night long. We became really good friends.

Lauren: Then I started dating his best friend.

Rob: I introduced them. I was a little bit I think. We kind of drifted apart at that point. That was hard too because now I had to tell him I was in love with her. We are all friends now.

Lauren: Now we’ve been together for 13 years.

Now, let’s talk about the music a little bit….3 Americans doing an interview in London….Rob: We all look like we could be in CBGBs..

The new song, that I absolutely love more than life itself….who wrote it?

Lauren: That one has sort of an energy about it, it’s sort of  anthemic….

Rob: Its a mixture of all the things we love, country, punk, blues, ….

It just makes me happy. What’s with the tap dancing on the drums, while playing them at the same time Lauren?

Lauren: There are other bands that have tap dancers because I’ve played with them, love Tilly and the Wall. It’s because it’s the only way I know how to drum.

Rob: She started as a tap  dancing percussionist, and the drums came after.

Lauren: I use to tap a long side of an actual drummer, so I would fill in the cracks, do little fills, but I didn’t know how to play the drums. I didn’t start playing the drums till 2011.

Your video, you go absolutely ballistic, right smack in the middle of the desert.

Rob: She almost died making that video. She was hyperventilating. We thought we’d have to take her to the hospital. 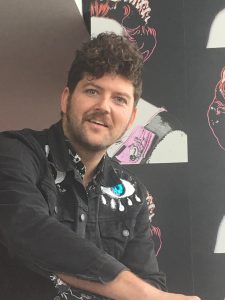 Rob: So did you see the statues in the video? We had to put her under one of them in the shade because that was the only shade it was. She was dying, and she turned bright red, she was like the color of a tomato. So we ran and got her Gatorade, and water and all this stuff, and after about 30 minutes she said she could do another take.

Lauren: But I love it because at the time he said, ” Are you sure that you’re that sick?” Literally later on in the afternoon he got so sick and said “I know exactly how you felt”.

Rob: It was to the point that you’re so dry because you’re in the desert, you have no saliva, your tongue sticking to the top of your mouth, you’re almost gagging, but there’s nothing to gag.

So you both almost died? What desert did you do that video in?

Lauren: So Rob writes all of the salons and I serve is like the editor, I guess.

If you could say anything to your fans and followers, what would that be?

Rob: I’ll go  with that. I was going to think of something much more raunchy, like….” Feel free to get naked at our shows …

Lauren: Thank you and get naked!