Home Music Bands An interview with Kaila from Youth Man 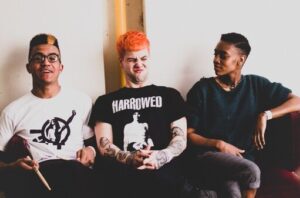 If you’re looking for a band to check out, Youth Man are the one! New, noisy and packed full of action their music is a breath of fresh air to the music scene. Sophie Sparham caught up with Kaila, who gave her the lowdown on what’s been happening this year ….

Louder Than War: So, you got to play Reading and Leeds fest – how was that?

Kaila: That was mental, because the day before we were in Glasgow, so we had to drive right down! The shows went really well and we sold loads of merch!  We also met up with the other Birmingham bands that were there. It was like the show interrupted the party! Miles grew up in Sheffield and went to Leeds loads so it was big deal for him. He got very nostalgic. For me it was my first time there.

What’s been some of your favourite shows this year?

The highlight was Montreux Jazz Festival, as it’s just such an amazing festival. It was a big road trip and we were there for a few days in Geneva. It’s so beautiful and everyone treated us well. It was surreal for us to play such a big festival! We played in a cave called The Rock Cave and it nearly got shut down, as there was a noise limit and we’re really loud!

You guys have come so far this year, what’s the journey been like?

I think we’ve been so busy that we’ve not had a chance to appreciate it yet. We’ve been balancing getting the time off work, we all work full time and they’re really understanding. Every time we’ve had a day off, we’ve been playing a show, so we’ve basically had no days off this year. Our days off are normally spent travelling 5 hours in a van, it’s just great to see people turning out for shows!

I love your music because it’s so raucous – was that always the intention?

I think when we started the idea was that we were not quite hearing what we wanted to hear and so did to try and make it. We tried the technical, noisy punk and this is what we came out with. We wanted to be loud. I was still learning to play guitar, my style has developed around the base and the drums. What with Miles joining our sound is evolving well together. This was my first proper band, I’ve never been a singer before and at the time I was listening The Pixies, X Ray Specs, Black Flag, Dead Kennedys and tried to do a poor imitation of my idols! It helped me find what I could do and what I liked.

Who are your inspirations?

What was it like making your last video, Pigs? Who is that poor man that you tied up?

He’s our producer, he’s this awesome guy from Birmingham. I didn’t know him before I met him through Miles. He’s an awesome sound engineer and producer and always up for anything. We asked him if he’d do it and he was like of course. So we got like 20 McDonalds burgers and just shoved them all in his face.

Who is the man in the pig mask?

Marcus! He loves props. If he sees something weird in a shop window he gets it! He’s got binoculars, an air rifle, knives, a crystal skull, everything! It’s great for our videos.

Talk to me about the November tour with Tiger Cub

It’s gonna be wicked, we met them last year at a festival and they played just before us at YNot festival. They’ve got good vibes and we’ve got the same agent so it’s gonna be fun.