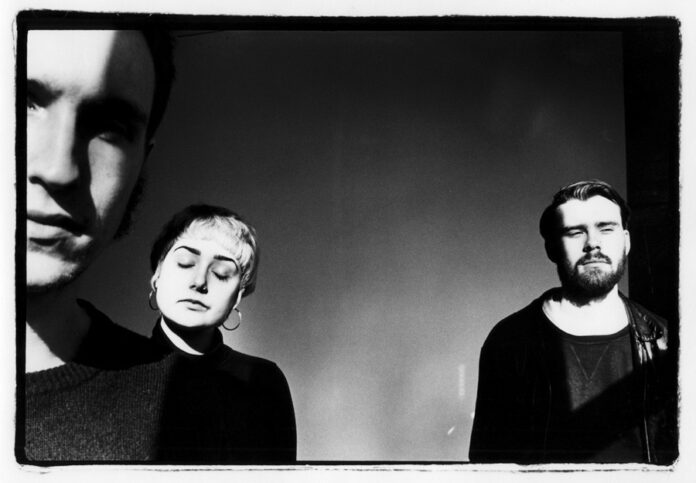 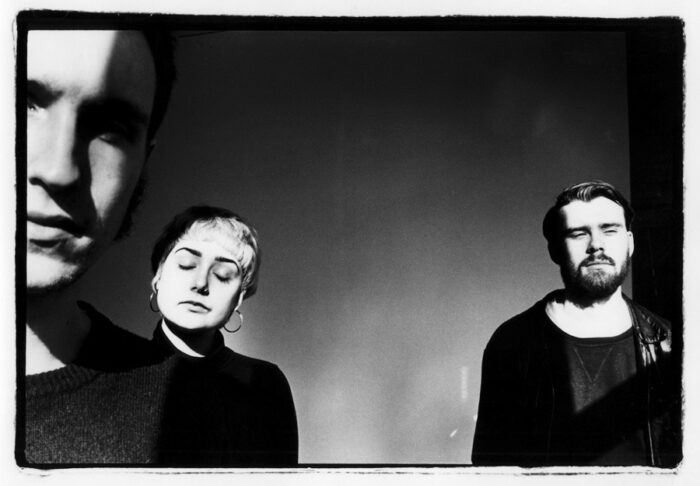 With their debut album, Urth, due out later this month, Louder Than War’s Stephen Murphy sits down for a chat with one of Nottingham’s best bands – Kagoule.

For me, some of the best records of 2015 thus far, have been made by Nottingham based musicians. With jaw dropping albums by Cantaloupe, Grey Hairs and Sleaford Mods already out in the public domain, and with future gems like Agony by Practical Lovers waiting to be released, Nottingham is a city producing multi-genre musical classics at the same rate it used to churn out Raleigh Choppers, ciggies and fucking lace curtains.

The most impressive Notts offering so far this year though, is a skewed, 90s alt rock influenced debut LP by a young three piece called Kagoule – or as their friends and family know them – Cai Burns on vocals/guitar, Lucy Hatter on bass/vocals and Lawrence English on drums.

While the band have been a fixture on the Nottingham gig circuit for the last few years, the last twelve months has seen bigger support slots (The Who), increased media exposure, and a growing sense of excitment about their first long player.

With said album, Urth, due out later this month, I recently sat down with Cai and Lawrence from the band to discuss amongst other things – songwriting, independence, tour bus induced homicide and erm, origami.

In the surroundings of Rough Trade Nottingham’s café bar, I begin the interview by asking Cai how Kagoule formed.

“The three of us met when we were about 14. We were all at the same school and had similar interests and ways of thinking, and this led us to try and make music together. We were using any instruments that were lying around really. We started off with a guitar with two strings, just adding more as we got hold of them.”

With this kind of instrument and equipment poverty, and the struggle it takes get the ball rolling when forming a band, you’d expect that a career in music was the only thing the individual members of Kagoule ever wanted. Cai though has a bit of a surprising answer.

“I’m still not sure if I want to do it (music) now! This is just one of those things I’ve got interested in, and I suppose feels like the natural thing to do for the moment.”

“We’ve always looked for things to occupy us and get rid of boredom. Music is the one thing that’s really stuck, and met that need in all of us I suppose”.

From a lot of musicians, these answers would have felt like a show of pseudo dispassion – a front, just in case career wise, things don’t go as planned. However, there’s a very real sense that Cai and Lawrence are genuinely bemused that things have got to a point where they’re now on a large independent label, about to release an eagerly awaited debut album, and that they’re rubbing shoulders with rock star royalty like Johnny Marr and Lou Barlow. As Cai himself admits, with a big smile on his face, “yeah, it’s all kind of spiralled. It’s almost a full time job!”

Listening to Kagoule’s debut album, you’d be forgiven for thinking that they’d been force fed a heady diet of Nirvana, Sonic Youth and The Pixies before a time that they could even walk. Cai explains that this wasn’t the case though.

“Up until the age of 16, I didn’t have any major influences apart from what was new at the time. I’d listen to music and just forget about it, but when we started doing our first few gigs around Nottingham, and were being compared to bands like Smashing Pumpkins – who I swear we’d never heard of – we started to check out that kind of music from the past, and it was like ‘God, what have we been missing?!’. It was the first music that we all wanted to draw influence from, and whilst we’re not ripping it off, it has obviously has come out in the tunes that we now write”.

When I ask about the song writing set up in Kagoule, Lawrence explains that “it’s mainly Cai who come in with some riffs or a whole song. Then as a band, we play around with it until sounds as we want it, but yeah, it Cai who’s come up with all them sweet melodies”.

As well as the tunes, Cai also writes all the lyrics for Kagoule. He explains that that “tunes are always written first, and that lyrics are then written to fit the tune. Sometimes though, the lyrics have their own influence and their own thing, and this can drastically alter the structure of the whole song”. What ever the process, there’s no arguing that Kagoule’s contemporary take on grunge has produced some of the most listenable, and viscerally exciting songs of the year.

One of the biggest surprises about Kagoule, is their choice of record label. Earache Records are traditionally the home of sweaty, grunting speed/death/thrash/insert-your-own-label metalpigs, and whilst the Kagoule are hardly Taylor Swift, it does seems like an odd choice. Cai explains why they chose to be label bedfellows with the likes of The Berzerker (‘Dear God, help me’) and Circle of the Dead Children (‘Mummy, I’m frightened’).

“I suppose to a lot of people, signing to Earache didn’t make a lot of sense, and that’s kind of the reason we did it. They’re also based in Nottingham, so if they’re ignoring us, they can’t hide. We can just go round to their offices”.

Subverting expectations, and maintaining creative independence seem to be very important to Kagoule. Lawrence confirms that this is very much the case.

“One of the crucial things about our contract with Earache, is that we have total independent control. As long as we keep the ideas flowing, we have free rein when it comes to creative output. I suspect a lot of what we do, and what we want to do in the future couldn’t be done on a major label”.

“It feels very much like the label trusts us. I don’t think we could handle being told what to do, or that we had to change or compromise our ideas”.

It seems independence does come at a price though. Cai and Lawrence both admit that signing with a major label would have been more financially lucrative, but it seems the band is happy with the independence/monetary balance they’re achieved so far, even if it means making compromises. Whilst Lawrence is still at home, and has completed a series of college courses over the last few years concurrent to being in Kagoule, Cai explains that he has to work to pay rent and to live.

“We’ve still not really made a penny doing music. I have to work in a tea shop three days a week – which is fine, because I really like it there – but the band is reaching that middle area where we’re too busy to work, but not earning enough from music to support ourselves. I don’t want to have to stop doing music though”.

Like a lot of musicians, Kagoule are stuck in the very real shit-coated catch 22 that Cai describes, but immediate money worries aside, the future does look very bright for Kagoule. As well as releasing a debut album, Lawrence confirms that they’ll also be playing some American gigs in September/October.

“With Earache having American offices, we’ve got U.S. gigs lined up before we’ve even played Europe, which is crazy!”

“We’ve never been on a proper tour. I think the longest we’ve been away is a week, and even then we had days off. It’s really hard to say what what will happen. Perhaps we’ll just end up killing each other”.

Poor Kagoule. They’ll either come back from the U.S. as hardened gig warriors, need a protracted stay in rehab for ‘mental exhaustion’, or be on the search for a new drummer because poor Lawrence has exploded. A small part of me fears for them, but on the whole, I’m insanely jealous.

During my time with Kagoule, we also discuss Lawrence’s disturbing band artwork (“sometimes I think I shouldn’t delve too much into thinking about where my ideas come from. I might discover something I don’t want to know”), Cai meeting his musical heroes (“I was going off on one, telling him some random weird stuff, then after about two minutes I thought ‘wait a minute, this is Johnny Marr I’m talking to. I’d better go’”, and perhaps most disappointingly, that the title of their debut album, Urth, isn’t a tribute to the way Nottingham folk pronounce earth, but is in-fact a reference to the works of sci-fi writer – Gene Wolf.

I end the interview though, by asking if the members of Kagoule have a plan B, just on the (slim) off-chance that world domination isn’t achieved. Lawrence is the first to answer.

“Mainly street-dance. We’ve always had that in the back of our minds as an alternative. In fact, we always split the band practice into a music bit and a street-dance bit, just in case things don’t work out”.

Cai picks up the cheeky bastard piss take baton with aplomb, by adding in his plan B options.

“Musicals or limerick writing. I’m really crap at the limericks at the moment, but I’m working at it! Origami might be another option as well!”

It’s Cai though who has the last serious word about Kagoule’s future, should Urth fail to launch.

“I personally don’t really have many other skills. I think I’ll always be doing some kind of musical project. When I try and do anything else, I always find myself picking up a guitar and writing songs. I suspect that if this doesn’t work, I’ll be on minimum wage the rest of my life, or taking over the tea shop I work in”.

As I leave Cai and Lawrence to do what ever bands do on a Wednesday afternoon, I’m struck by how confident, funny and engaging the pair are. Like all teenagers, they have their contrary, contradictory and cheeky sides, but their lack of ego and genuine bemusement at what is happening to them is refreshing to see. This paired with the fact that they’ve not only produced the best Nottingham album of the year, but the best album of the year from any-fucking-where, makes them a band you have to support and allow into your life. Kagoule – too good to be working in bastard tea shops.

Their Debut album, Urth, is released on 21/08/15 by Earache Records. It can be pre-ordered here.