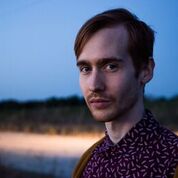 Julien the Child, Tampa indie pop/electronic artist, has just released his new single called Self Aware. The single is the first from his upcoming album entitled Memory Flu.

Louder Than War spoke with Oliver Eldridge, the mastermind behind Julien the Child, about his influences, themes and philosophies. A song writer since age 10 – now 24 years old – he has been releasing music under various monikers, but finally decided upon Julien the Child. His music has a good feel to it, with deeper and darker lyrics, and, of course, with a message.

Louder Than War: So how and why did you come up with the name Julien the Child?

The name is probably not going to be the most interesting explanation of a project moniker that you’ve heard but, it basically came from a place where I’ve been going under various monikers for several years. I had a bit of trouble settling on one for a while. I would pick one and use that to release recordings, then I wouldn’t be overly thrilled with it for a while. Then there were various artists that would pop up and would be using the same moniker.  When I was 22 or 23 I decided that I should pick one that wasn’t really an obvious choice, as far as having a specific meaning to it. It’s just something that fits emotionally with me when I get the title, or think of the title, when I say to people, Julien the Child. It’s just one that struck me well. I decided it was the one I wanted to move forward with.

The name is creative, has a certain feel to it. Tell me a little bit about your new single  Self-Aware. Is there a theme to it?

Oh Yeah. Self-Aware is written from the perspective of someone who is as self-aware or self-conscious as you can feel. We have so much information about the nature of existence available to us now that it can be a bit overwhelming at times for a lot of people. With that in mind, the song is almost written like a letter to a person who hasn’t come in to that level of self-awareness yet, almost like a child, almost written like a warning. It’s almost like a cry for help from the perspective of the narrator, particularly once the chorus starts. I tried to reflect that tension and ability to cope in my vocal delivery as well. I try to reflect the almost cold self-awareness in the music by keeping the music up beat and light, and almost maddeningly repetitive, because that’s how the degree of self-awareness can feel to some people sometimes. So it’s something we just kind of have to except if we plan to move forward with our lives in any kind of practical way. The music almost has a happy sound, and the lyrics are a bit darker in nature. Those are the kind that tend to sit with me best emotionally.

So you’re a fan of Joy Division?

Aside from Joy Division, who did you listen to growing up?

It changed a lot. When I was younger I wasn’t really allowed a lot of different kinds of music, because I grew up in a pretty conservative Christian environment.

For some reason I felt that.

I think that upbringing certainly had a strong influence on me, especially if you heard my first album. It’s always kind of worked its way into my life. So that was the environment I was in. So the music I was exposed to happen to be the music that my parents listened to which was kind of contemporary Christian rock music and stuff like that. A lot of it is not very good but, there were some of it that actually has some really great melodies and some catchy hooks. My dad was not super musically inclined. He took piano lessons for eight years because his mom made him, and then he quit when she said he didn’t have to anymore. He would walk around my house though whistling melodies and always had a really strong focus on melodies, even if it was just subconsciously. Because I grew up around him, it just really had an impression on me I think. He got me really focused on melody and what I can do with melody, and how you could manipulate it. Some of it can really stick with people, if you manipulate it in a different way, it won’t stick with people at all. That was really my focus as a child. When I got older I started listening to more avant-garde music, and different genres, like rap, and grunge. All of these really unique bands I found really interesting and engaging. This album that I am working on specifically now was really influenced by the Beach Boys and the 1970’s vibe, Joy Division, Bright Eyes, just a lot of different bands that I really loved. Experimentation with that underlying pop vibe is still there, but I like to put it in the direction that it hasn’t gone before. So I try as much as I can to do that with the music I make. It’s almost like that thing where you kind of make the music that you wish other people did. Since no one else is doing it, its just like well, I should do it.

Do you play a lot live?

I don’t actually, as of yet. A couple of weeks ago I was visiting a few friends in California, which is where I am planning on ending up in the next couple of years. I played a couple of the shows with some old friends, little radio stations… Before that I haven’t played a live show in a couple of years because I’ve been focusing on improving as a recording artist rather than a live artist. That’s predominately been my focus, but now that my album is done for the most part, I’m going to end up in an area where there’s a big music scene. I’ll really focus on doing live performances.

Is there any song that always evokes emotion when you hear it?

Yeah, that’s a really interesting question. It works for actually a lot of different ones. Music has always just affected me really. I always took it for granted that it affected everyone. For me ever since I was a kid I’d be listening to a song with a melody that worked for me emotionally. I could just like feel it in my chest. It was really magical. When I make music I try to always give myself that feeling with what I make. A specific example, I like Tom Wait, one that I am obsessing over now. I’ve had a steady diet of Joy Division. My friends are in a band called Oliver Riot, which I’m actually a huge fan of. I know the guys so that’s why it’s nice. Then like I said, The Beach Boys have been a very recent listening spree for me, because I never really got into The Beach Boys. I saw that movie Love and Mercy. I really loved watching that film. It showed me a side of the Beach Boys I’d never seen. Watching that movie was actually a huge catalyst in me making the new album.

Do you know where you want to be in the next 10 years?

I’ve actually been asking myself that a lot lately. The short answer is I’m not 100% sure. I’m still becoming more well read about how the music industry really works. I’m not going to expect things to happen for me the way things have happened for other artists 20 years ago. Especially in the music industry because it’s different now. I would certainly think that I’ll have released a few albums and have certainly a larger fan base than I do now, and have done a lot of live shows.