Home Music Bands Louder Than War Interview: Jonny Cola And The A Grades

Having reviewed their fabulous new album Spitfire on these pages Louder Than War took the opportunity to interview Jonny Cola and the A-Grades just before they took to the stage of the intimate, but atmospheric Brixton Windmill.

It was a special evening; they were down to a four-piece as guitarist and apparent poutmeister Mauro Venegas was absent due to imminent fatherhood. Present and correct were Jonny, guitarist Jez Leather, bassist Simon Drowner and drummer Marco Testa-Ryan.

The interview covered quite a range of subjects, so here are my highlights.

Louder Than War: Since the release of Spitfire, I guess you must all be pleased by the overwhelmingly positive response it has received in the press? It’s quite a leap forward from the ‘Halo’ EP Talk to me about the leap. What happened?

Jonny Cola: The ‘Halo’ EP was the first thing that we recorded as the line-up that we are now. Mauro and I started the band about four years ago, but it was only when we got this rhythm section together that things really gelled. We were feeling our way when we recorded the EP, and this is an expansion of that.

Marco Testa-Ryan: It happened pretty spontaneously really. We went in and recorded songs as we got them at first.

JC: Yeah, we were going to record this as another EP, then I got very ill and then Mauro said, “let’s just do an album; record everything we’ve got”, as my recovery was going to take time. After that, we still had a lot to do; we finished recording over a month and mixed it in three days.

So, was it a planned progression of songs, or did it occur naturally? While it’s not a concept album, there is a feeling throughout of expansion.

MTR: The songs came in a steady flow, and as they came our style was changing. It was spontaneous. Once we realised that Jonny was ill, we decided we needed to put this altogether. All the drums were recorded before the operation, the majority anyway.

JC: There were a couple of tracks nearly finished, then after I’d recuperated, we went back in, thinking ‘right, we need to get this out now’. Then, Mauro’s baby was due…

MTR: Yeah, Mauro told us all when we were here (at The Windmill). There’s something going on about this place.

Was it strange for you to come back to these songs after your recovery, having had a clear idea beforehand of where you wanted them to go?

JC: It was fine; the majority was written when I was ill. Some tracks predate that. The big change was being diagnosed with kidney failure, and everything that happened after that. From the transplant onwards, it’s been ongoing recovery. Only one song really alludes to that situation, and even that was oblique really.

Knowing about your transplant before reviewing the album maybe colours my view of the meaning to the songs. There is a real ‘lust for life’ running through it.

Simon Drowner: There was definitely a sense of urgency.

JC: Oh yeah. The videos that we filmed were a clear example of that; they had to be completed before my operation. Or our plans would have gone tits up.

MTR: It’s a really loaded album. There’s so much in there; ‘Sunset/Sunrise’ especially. It’s the next step for us. It’s a very coherent album, a body of work.

Jez, is most of the production and engineering your side of things?

Don’t sound too enthused! It worked out really well. Is this your area of expertise then?

JL: Not really, it’s just that no one else could do it. I’m learning as I go along. You can spend too much time on it, so he (Jonny) stops all that.

MTR: We worked quite quickly. The drum sound was good, and if it doesn’t sound right, the whole recording can sound like a demo. They were the only things not recorded in Jez’s studio.

JC: (Pointing at Simon) You’re the easy one! You just turn up, plug in and do your bit. ‘First-take Simon’!

SD: Not quite. Sometimes.

And what’s happening with touring now? Are you preparing a longer run of dates for next year?

JC: We did a handful of dates around the release, knowing that you can’t take a father away from his baby! You can go to Glasgow and no fucker might turn up. Some festivals would be nice. You can only play so many London dates without boring people. People are bored and skint.

Speaking of austerity, you did well by using Pledge Music to finance ‘Spitfire’. One of the arguments against it seems to be the idea that you have to be really well known with tens of thousands of fans to make it work. How was it?

JL: You have to use it properly and work on a budget.

SD: If you pledged for the download album for £8, you got entry to the gig for free, so you basically got the album for £2. And the exclusive tracks…

JC: Yeah, don’t forget the exclusive tracks. It was a lot of work. And there’s the naked calendar shoot to still do. Some people can buy the high value things while most buy the smaller value stuff. Someone bid a grand for a package in the first few pledges, which was a bit crazy, but people kept pledging. I think it was over 230% in the end.

Would you use Pledge Music again? What would you change?

MTR: The most obvious problem is that we had less time to play, rehearse and gig as we had to plan it all ourselves. We don’t want villas in the sun, we just want to get by.

JC: It can squash the artistry out of you. Only Heidi, my wife, helped outside of the band with the work for Pledge.

JL: I think a label might handle it more efficiently.

SD: I’ve got a question for you.

SD: Have you seen us live before tonight?

SD: I knew it! You’re gonna see us without Mauro. He does guitar, backing vocals, pouts. There will be something missing tonight. Come and see us again.

And so, I let them hit the stage. As my gig review said, they did Mauro proud. And once again, congratulations to Daddy Venegas. I will see you all soon…

All words by Martin Haslam. More work by Martin can be found in his Louder Than War author’s archive. 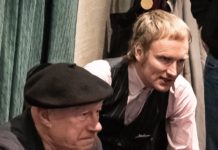 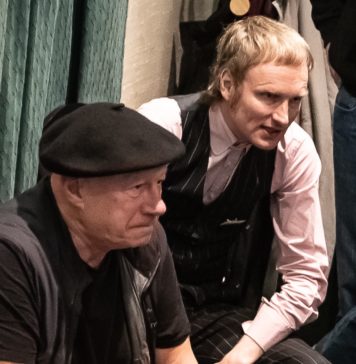 November 4, 2014
We use cookies to ensure that we give you the best experience on our website. If you continue to use this site we will assume that you are happy with it.Ok