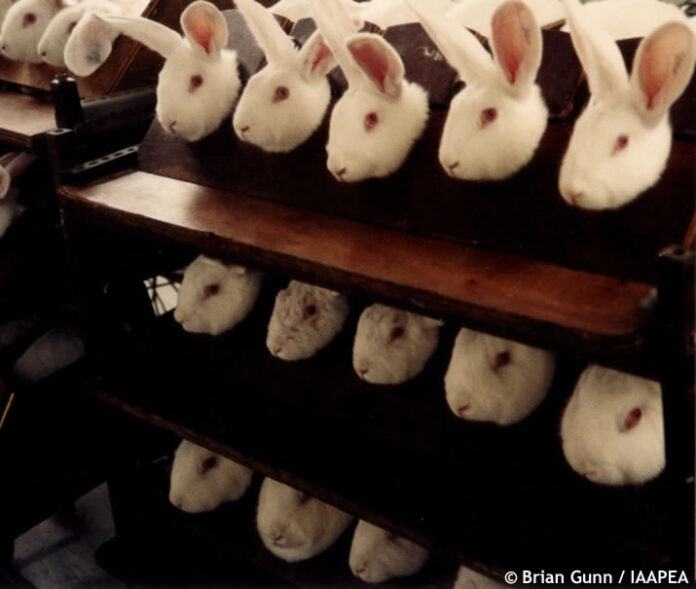 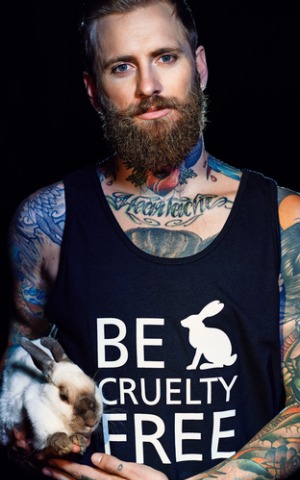 When Jona Weinhofen, 31, was a teenager, it was the musicians he admired who exposed him to a vegan lifestyle. Now a vegan for over 14 years, he is inspiring change in others.

Guitarist with metalcore band I Killed The Prom Queen, Mr Weinhofen has long been on the growing list of entertainers who are vocal animal activists. As a face of the Be Cruelty-Free Australia Campaign, he has teamed up with Humane Research Australia, Humane Society International and Choose Cruelty-Free to help end cosmetic testing on animals worldwide.

“So many people don’t know about what happens behind closed doors in slaughterhouses and with animal testing,” Mr Weinhofen says. “We’re a small minority of people up against large corporations with billions of dollars, but if we can sort of chip away and slowly spread awareness through whatever medium it is, whether it be music or television or anything, it’s going to help toward positive change.”

Cosmetics animal testing has typically been an issue geared toward women, but Mr Weinhofen stresses the importance of getting the message to men.

“A lot of guys probably don’t really think much about the products they use,” he says. “According to PETA, some of the biggest animal-testing companies are Colgate and Gillette, and it makes all manner of shaving and men’s beauty and hygiene products, and so whether it’s just having a shave in the morning or brushing their teeth with toothpaste, it’s not just women who are funding animal testing by buying these products, it’s men, too.”

The global Be Cruelty-Free Campaign works in 12 countries to end cosmetics animal testing. However, individual state and government laws in relation to animal testing vary from country to country.

The Be-Cruelty Free Australia Campaign recently voiced its support for the End Cruel Cosmetics Bill proposed by the Australian Greens.

Last year, the Australian Labor Party foreshadowed a national consultation on phasing out the importation, manufacture, sale and advertising of cosmetics or cosmetic ingredients tested on animals.

Lee Rhiannon, Greens Senator for NSW, who introduced the Ban Cruel Cosmetics Bill to Federal Parliament in March, says, “We were very pleased that Labor had a similar to position to the Greens and we thought now is the opportunity: we can work together and have this Bill introduced and possibly passed.”

Senator Rhiannon credits animal welfare community groups and individuals for communicating with their local members about the drafting of the Bill.

“It is public opinion that is driving the change and putting the pressure on politicians to vote for good, progressive legislation like we have in this case,” she says.

A opinion poll carried out by Nexus Research last May revealed 81 per cent of the population agrees that Australia should follow the European Union and ban the sale of cosmetics tested on animals. Fifty seven per cent of people are aware that animals are still used in experimental research in Australia.

Phillip Hall, Humane Education Officer at Animal Liberation NSW, says, “You can put through as many social justice bills as you want, but unless they’re going to pass the Upper and Lower house, then they’re not going to do anything,” he says, “so having popular support behind the bill is crucial.”

Mr Hall says it is important that celebrities use their status to raise awareness of animal rights and relevant legislation changes.

“It’s so important to have a social and cultural change as well as a legal and political one,” he says. “As much as someone in academia or the scientific field can make a pronouncement or finding, unfortunately not everyone is going to see it. So you get a wider reach and influence from people who take a consistent ethical stance in a public sphere, like a celebrity.”

Mr Weinhofen isn’t the only celebrity who has given his name to animal activism recently. Comedians Arj Barker, Carl Barron, Anthony Lehmann (Lehmo) and Peter Rowsthorn recently fronted a campaign by Animals Australia to end the plight of battery cage hens. British comedian Ricky Gervais is also part of the Be Cruelty-Free Australia Campaign.

As Jona Weinhofen says, “People like myself and Ricky Gervais and all the people we work with are trying to get information out to people so they know what they’re getting involved in on a daily basis.

“If, for some reason, my face and my band and my tattoos or whatever help people stumble across that information, that’s really fantastic.”

Interview by Elena Wewer. You can read more from Elena on Louder Than War here.