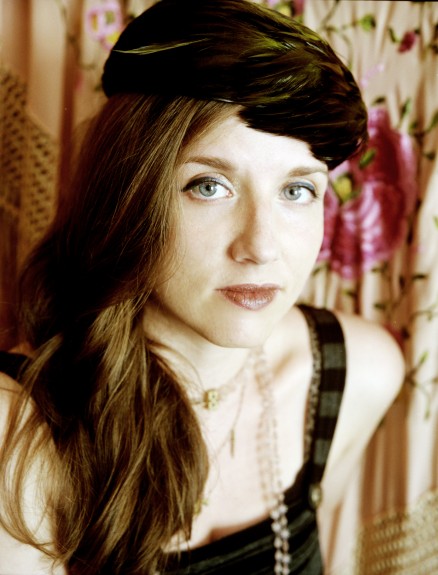 Jolie Holland plays The Lantern, Colston Hall tonight as part of Bristol Americana Weekend. As a prelude to this Melz Durston talked to the Texan singer-songwriter for Louder Than War.

An artist who seeks out the honesty in music, Jolie Holland has often singled out Syd Barrett as the epitome of bare, stripped back truth. Somehow, whilst avoiding imitation of the voices of adoration, Jolie has emerged as a definitive voice that stands out for its sometimes vintage, often authentic qualities – as though each note she sings is infused with echoes of the past.

Tom Waits is a loyal admirer of Jolie’s work, as is author and musician with the Wingdale Community Singers, Rick Moody (author of On Celestial Music amongst others) who writes:

“She dives straight to the pathos of a song the way the very greatest singers, singers like Mavis Staples, or Al Green, or Skip James, or Tom Waits do.”

Jolie released her sixth and partially self-produced album, Wine Dark Sea, last year via ANTI- records, a label who’re, appropriately, also home to peers including Tom Waits, Arc Iris, Wilco and Calexico. Tonight, Jolie plays an intimate show at Colston Hall’s The Lantern. We hope you can join her there.  Read on, for an in-depth conversation between Jolie and author Melz Durston…

Melz Durston: I read a bio about you written by Rick Moody and John Kruth. Rick has published novels as well as On Celestial Music, an exploration of the ways music threads through our lives. Is your own life history and musical career something you could imagine being put into words and is there an author whom you might entrust with this task?

Jolie Holland: Kruth and Moody are like family to me. I played violin and sang back up on Kruth’s last record. And I did the string sections on the last Wingdale Community Singers record. On Celestial Music is one of my favorite books of Rick’s. I gave lots of copies to friends. I find that I am unable to presume to imagine anyone writing about my life. If it were to transpire, I can only hope that it would be post-mortem, otherwise I’d die of embarrassment.

Your song Mexico City encompasses a dark reality and I wondered if this was written with a strong visionary image in mind or did it evolve and take shape less consciously? I always think of you as a very empathetic songwriter – your songwriting often conjures up scenes from times passed and lives that have seen pain and suffering and resilience – do you naturally find that your songwriting comes from a place outside of your own realm of experience – and in doing so, are you inhabiting a kind of empathy with another character?

When I listen to music, I am reflexively analyzing form and intent. Mexico City is one of the first songs I wrote where I was attempting to use doo-wop tropes in a bizarre setting. It’s like a distorted doo-wop song.

The lyrics are written from the perspective of Joan Vollmer Boroughs, the woman William S. Boroughs shot in the head. The central verse is based on two stories: a friend of mine was playing drums for a vodoun sosyete in New Orleans when he heard a great invisible chorus of women singing; and the line about the smoke comes from a dream Allen Ginsburg had about Joan after her death. Otherwise the song is composed of scenes from Joan’s life. It is full of concrete images – it’s not based on an unconscious flow. The impetus of the song, however, arose when I was literally unconscious. I never would have written the song had I not had a very striking dream about Joan.

Again, referring to Mexico City, you collaborated with Tanya Donelly on this song backstage at Wordstock in Portland… Are there certain musicians and vocalists you feel an affinity for and able to merge vocals and ideas with?

It’s so rare and wonderful to find someone with whom your voice blends. Of course it’s more likely to happen when you’re singing with professionals. Tanya and I got to sing at one event and one party, and it was lovely.

I love to sing with Black Yaya. And Rick Moody. I love singing backup for great songwriters.

When performing, do you have to find your own space whilst on stage or making a music video, in order to stay in the present moment and perform from a place of honesty? Does this ever get stale, especially when performing songs from your back catalogue over a decade ago, and how do you bring yourself back?

If I ever get lost on stage, I do ‘the Keith Richards’ meditation.’ It’s only of private significance, based on a couple quotes from Tom Waits. He said ‘Keith Richards doesn’t play music- music plays Keith Richards’ and ‘we all love music, but what we really want is for music to love us back- that’s the way it is with Keith Richards.’

Travel and experience clearly is a big part of who you are, Jolie, and I wondered if this hunger for adventure and absorbing everything that is beyond our immediate understandings, has fuelled your songwriting?

I was a homeless teenager who mostly lived on the road, and I’ve never lived anywhere long. Touring just flows into that process. I’d love to live somewhere, but the exigencies of my fate have not allowed for that. Once, we were living in a house built on the back of a long bed pickup truck. We were stranded in the snow in the Rocky Mountains for a few days. We had enough food to sustain us but it was very boring. We had a great library in the little house and read pages and pages of Leaves of Grass to each other. We were three humans, a purebred Vizsla and her young puppy.

When recording your latest album, were there a lot of raw takes and bare vocals that formed the album? Is honesty something that you try hard to retain no matter how many takes or striving for the perfect note in a studio situation? And do you favour playing live because of its immediacy and therefore, honesty?

I like to hear live interaction between players, so I prioritize live performance in the studio. Almost all the vocals were recorded simultaneously. Very little was overdubbed.

We were mostly seven players playing all at once in the studio. I rehearsed the band so appropriately that there was no need for a lot of takes.

Related to the above, your video for Waiting for the Sun is based around a live performance in a club – it’s a very flowing video where the body and voice seem inextricably bound – would you say that you aim for this synergy when playing live? A sort of fluidity that melds you with your guitar with your vocals with your audience?

Live performance is important. Like they say, the truth of the Torah is in the telling.

Jolie plays The Lantern this evening with Black Yaya. Full details and tickets from here.