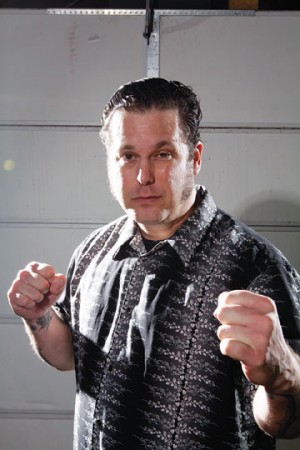 Louder Than War’s Ian Critchley spoke with Lucero bass player, John C. Stubblefield, about the band’s future, their music being featured on The Walking Dead, and how they had originally hoped to annoy the punk rock community…

LTW: Hi there! How’s it going?

JCS: Things are good! Just got off a month long St. Patrick’s day tour with the Dropkick Murphys, then immediately went to Girdwood Alaska and played three shows. That’s a trip, as its about the same amount of travel as Memphis TN ( our home town) to Europe. Since getting back from Alaska, been enjoying the Easter holiday season in Memphis with friends and family. Now getting things together to head over to Europe, for THE MEMPHIS TAKEOVER TOUR!!!!

Lucero are currently touring around the UK. Is it good to be over here again?

Hell yeah! We were over sept/oct. of 2013, supporting our dear friends Frank Turner and the Sleeping Souls, throughout Germany and the Netherlands, (no UK dates unfortunately) That tour was awesomely massive We’ve been a band for 16 years now and really just getting started in Europe! It’s very refreshing to be playing new venues for new ears. Every time we come back the crowds seem to be growing exponentially, so that’s always a good feeling, especially so far from home!

Women & Work is your latest studio full length, and it seems to take a huge step musically from the previous records. What were your influences for the album? Personally it feels as if there was a lot of Thin Lizzy being played at the time of writing.

Women And Work is a document of where we are as a band now. On 1372 Overton Park we added some horns on during the pre-production process, they made it onto the record and toured with us over the next couple of years. When we went in to start the writing process for Women And Work the horns were even more a part of the band, and in our wheel house so to speak. This definitely inspired us to listen to more Obscure Memphis soul and R&B that the horn players and our piano player Rick Steff were turning us onto during tours. So yeah, the long and short of it, that album is an open love letter to all of our Memphis musical influences that came before us, soul, R&B, rock n roll, and even Gospel. That’s what Memphis music is an amalgamation of all these influences into one big thick musical stew!!!! Funny that you mention hearing a Thin Lizzy influence, being the bass player I definitely was channelling the spirit of Phil Lynott on the song Like Lightning.

You’re currently in the process of mixing a live album. When will that be due for release?

Actually writing this from Ardent Studios in Memphis TN, RIGHT now we are cutting the vinyl Lacquers on the old STAX lathe! It’s almost two hours worth of music. It’s gonna be a two disc CD and vinyl version will be four pieces of vinyl. That’s sides A,B, C, D, E, F, G,H! Hopefully if everything goes right it will be released sometime this summer, no definitive date yet, but it is definitely going to be released in the year of 2014. Without a doubt.

The Last Pale Light In The West was featured on The Walking Dead. That’s a HUGE show. Has it done any favours in building your reputation?

I’d imagine so! A lot of people were definitely aware of it! Any time writers and creative directors ask us to be a part of their production vision it’s a huge compliment and shot in the arm creatively! Be it Sons Of Anarchy, Treme’, Walking Dead or a theme song for a college basketball tournament on ESPN, it’s ingraining our sound in some small way into the subconscious of the viewer of said show, I like to think of it as one big cultural manipulation project. HA! How’s that for an answer!

You seem to be the dark horses of your respective genres. “Too punk for folk or country town, too country/folk for punk town”, that kind of thing. Have you found that this whole “punk-folk” explosion has boosted your fan base a lot, or is Lucero still working on a small but loyal fan base?

Well, when we started this band our MO was to start a country band to piss off the punk rockers! But they wound up loving it, we would play these acoustic shows with other lid punk rock bands, everyone would sit on the floor during our sets and listen intently, you could hear a pin drop. We’ve always done what we wanted to musically, a band of brothers bound together by our contempt for everything else! Just kidding! But seriously, it’s interesting times, I genuinely feel that with more easy access to delivery systems, ie the Internet etc, people’s ears are wider, they aren’t going to a record store and only going to the punk rock section, they are on their computers searching out new music, new genres , new sounds but at the end of the day ya either love Lucero or ya hate it, and we’re gonna keep on doin’ what we do, and that is playing rock n roll shows, one show at a time, representing the musical heritage of our hometown of Memphis TN!!!!

Thank you very much for your time! I hope you have a great tour!

Their tour dates are: