Home Music Bands Interview: Jocie Adams – we talk to the US folk artist and... 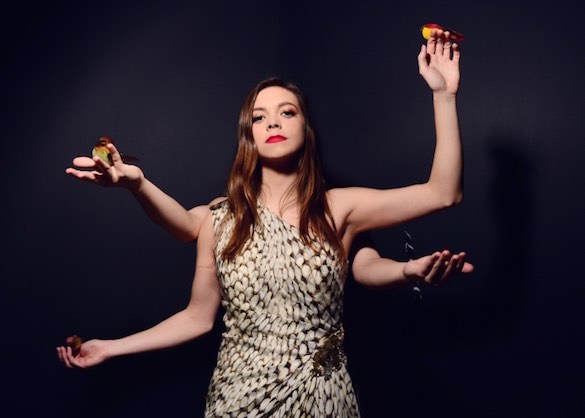 Jocie Adams, formerly of The Low Anthem, gave up her place at Browns University to study on a music PhD in favour of following her gut instinct and creating her own self-styled music. Still based out of Providence in Rhode Island, the former NASA researcher continues to push boundaries and carve new territory alongside band-mates Zach Tenorio-Miller, Ray Belli, Max Johnson, Robin Ryczek and Mike Irwin. She’s currently on tour in the UK with St Vincent so now seems like a great time to catch up with her. Louder Than War’s Melz Durston does the honours.

Rhode Island is also known for its filmic prowess – including American Beauty actor Mena Suvari as well as providing the magical location for Wes Anderson’s award-winning film Moonrise Kingdom. Musically, a mention is worthy of sisters Tanya Donelly and Kristin Hersh who grew up together in Rhode Island and formed their band Throwing Muses at the ages of fifteen and went on to forge global careers when they were signed to British indie label 4AD not long before the release of their debut LP in 1986. Kristin Hersh is bringing her band back to the UK this autumn, with Tanya Donelly providing support across nine dates and venues starting on September 17th.

But back to Arc Iris. Meaning “rainbow”, Jocelyn Adams is most definitely a multi-talented artist spanning the entire kaleidoscopic spectrum of light and colour. Her live performances are a sensory experience to rival even the most dare-devil artists and she brings her honesty, intellect and creative visions to each and every show, song and music video. Their latest work, a self-titled debut, recorded with Dan Cardinal in Jamaica Plain, Boston, was released in March on Bella Union and they played Brighton’s Great Escape in May.

Louder Than War: Your harmonies remind me a lot of Laura Marling, Midlake, Iron & Wine, and Mumford & Sons — do you find it frustrating that your sound should be compared with others, and how do you focus on your own work without becoming too overwhelmed with what is already out there?

Jocie Adams: We don’t think about all of that. That would be a poisonous perspective.  We will always be compared to others. People need to make comparisons to communicate the music to some degree and that is great. You can’t be frustrated by what others hear in your music.

Whiskey Man and its video (see above) has a real innocent yet mysterious feel to it — that feeling of being both incredibly capable, and at the same time, totally insignificant in the universe. Have you ever struggled with a contradiction in terms and states of mind, and has music been a guiding force in terms of finding your own authentic voice?

Music can be born from the curiosities of life. Without life there is no music and without music there is no life.

I saw Laura Cortese playing with Session Americana at the Lizard Lounge a few years ago — I was blown away with their intuitive style and the spontaneity of it all.  I noticed you’ve recently played out and about with Laura, and wondered whether much of your music is born out of ad-hoc, stream-of-consciousness and playfulness?

Both ways of approaching music are constantly at work. Without some semblance of composition and form there is nothing to play with, and without play, music can be boring!

Is your band line-up constantly growing and how did the current line-up evolve?

The line-up has not grown since the conception of our debut record. We tour as a quartet often for financial and logistical reasons. Before the record was released we had a rotating line-up because our cellist lives in Afghanistan. It was not practical to bring her over for short tours.

Your debut album has a really unusual cover artwork, can you tell us a bit more about this?

My friend Kacie Smith (kacieerinsmith.com) made a collage of imagery that was inspired by the music. She’s amazing.

Is the music scene in Providence not what it was in the 80s and 90s (as far as you can comment on) and in what ways is its community supportive in getting your music heard?

The Columbus Theatre has started a new community for music in Providence. There is also an underground noise music scene that I can’t comment on so much!

Lyrically, are you at all influenced by your surroundings and does Rhode Island cultivate its own unique identity?

I think that people around the world are starting to realize that we are playing “folk” music without the folk aspect. I think there will be a lyrical comeback in the next twenty years or so.

Do you tend to take inspiration from your peers and musicians in the locality?

Songwriters interested in using lyrics to contribute to the art of songwriting are often lyrically inspired older poets and lyrical geniuses who have stood the test of time. This does not mean that there aren’t lyrical geniuses among us that I don’t recognise (Elvis Perkins, Ben Miller of The Low Anthem and Anais Mitchell being among them in my opinion), but viewing these older, iconic and distant guys is more a measured thermometer of universal beauty.

Your first London show was in Bush Hall. What do you remember from that show?

The show was fantastic. People were so generous to us with their attention and excitement.  We had a wonderful time and can’t wait to play in London again!