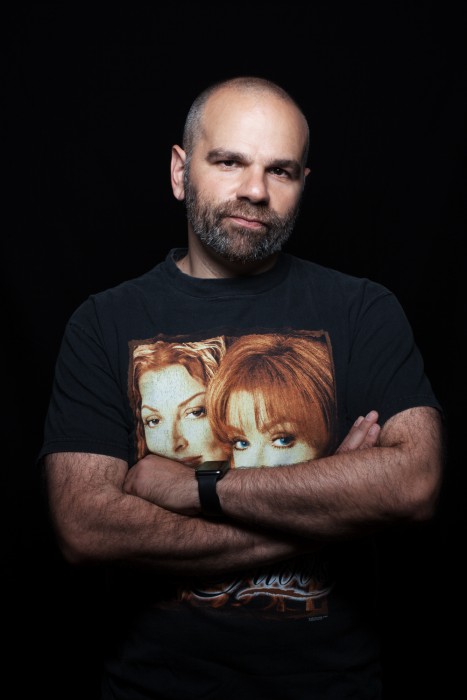 I heard something a little different from singer, songwriter, and therapist, Jim Andralis, in his debut album, entitled “Your Dying Wish Come True”.

Originally a member of NYC’s gay post punk sensations, “The Isotoners”, Jim has gone solo, creating a release that “explores the fragile beauty of human connection and stubborn hope in the face of its loss”.

Louder Than War spoke with Jim about his music, his history and his future intentions.

Louder Than War: How long have you been writing and singing?

In 2002 I was a bartender in this gay bar called “Phoenix”. I had just started taking accordion lesson. Two of my favorite bar customers, used to come in and sing me ridiculous songs like “Dollar Store Douche”, was one of them, they would come in and sing into my face as I was working. They took me into their group, ” The Isotoners”, to be a part of it. At first I was just the accordion player, then I became one of the songwriters. That’s when I really first started.

Do you play any other instruments?

I play accordion and guitar.

So tell me about your new release.

Your husband is also an artist?

He’s an artist and performer too. His name is Larry Krone. He is a visual artist and a really wonderful singer and songwriter. He also makes all the costumes for Bridget Everett, singer, songwriter and comedian. I recorded a song with her called ” Hit The Ground Fucking”.

Where will you be performing next?

I’m doing a show with my husband at Rockwood Music Hall Stage 3 on May 23rd.

You are a new addition to a crayon box, what color are you?

Iridescent orange. Do you know that I’m a therapist?

And you’re telling me this after speaking with me because?  Do you think I need therapy?

I think we all need therapy. The music career is the thing I really wanna do. I love doing both of them, but I’m totally established as a therapist. I’m totally an open book.

Anything else that you wish to say?

I’m in a songwriter’s group along with my husband Larry, and the songs that I wrote for this album, all were during a period of several losses. Writing the songs about the losses was a way that I sort of got through it. Also I think the music that’s on this record is really specific. I also think that there is something universal there that people connect with about loss, grief, connection and revolving relationships and all that stuff.