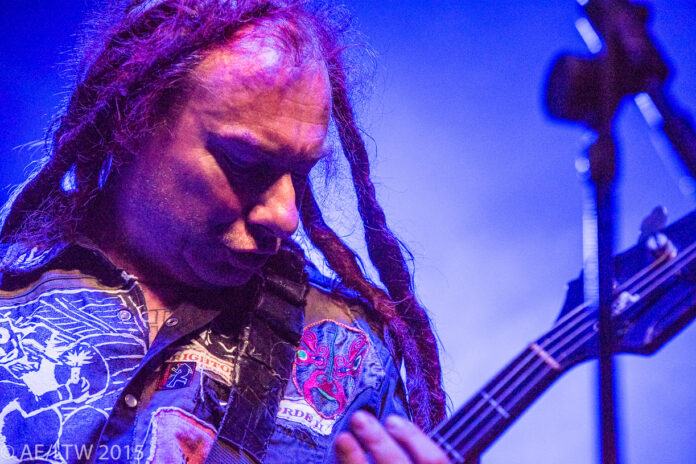 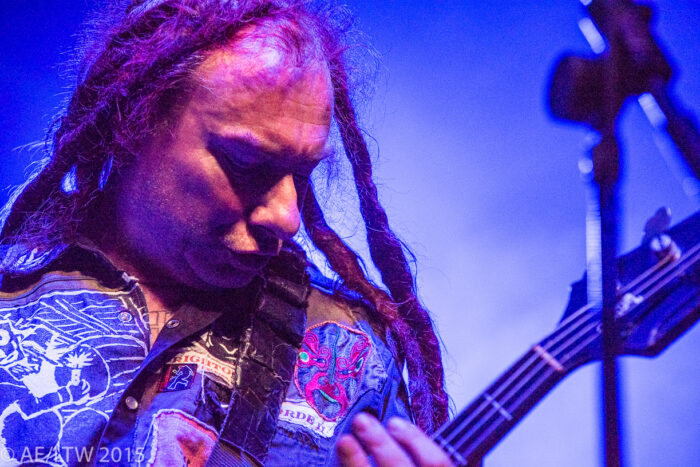 Long time Levellers fan Alan Ewart caught up with bass player and one time wild man Jez Cunningham to talk about ‘A Curious Life,’ Beautiful Days and what comes next for one of the countries best loved and most enduring bands.

I make no apologies for my love of the Levellers.  I have been a huge fan since the beginning, and I stick firmly to the conviction that 1991’s Levelling The Land is one of the best albums ever recorded. I have met Jez Cunningham briefly in the past and Mark Chadwick on a number of occasions and have always found them personable and friendly so I was really looking forward to having a more in-depth conversation. You always hope that those you admire from afar will live up to your expectations in real-life and I am delighted to say that Jez Cunningham most definitely does.

Jez Cunningham and the rest of the band arrived at the Larmer Tree later than planned as a result of traffic and having stopped off en-route from Brighton to pick up people and equipment for a gig in Cornwall the following evening.  I half expected the interview to be cancelled or for Jez to arrive harassed, not a bit of it.  Instead Jez breezed in looking happy, smiling and relaxed and settled down with a cup of herbal tea ready to chat.

I put it to Jez that both he and Mark had a reputation for wild living and asked why, in the circumstances they had agreed to do “A Curious Life,” especially given that he was to be the main focus of Dustan Bruce’s film about the band.  Jez surprised me somewhat with his reply, he explained that the Levellers were only willing to do something that they had “no control over” provided they felt they would like the film makers work.

Jez said “we were asked to do a film around the time of our tenth anniversary.  We were also approached by Channel4 but we just weren’t into it.  We weren’t sure they would do something we liked.  We wanted something that we had no control over but we needed to be confident that we and our fans would like it.”

“When Dunstan approached us we took him out on tour with us and he did a sort of video diary.  We loved what he did and agreed to the bigger project. It was easier because obviously we knew Dunstan pretty well and have done for years. When the 25th anniversary came up Dunstan wanted to do it and explained that it would be his project and we would have no control over it.”

If you have seen the movie you will know that Jez Cunningham was extremely candid about his struggles with drink and drugs over the years and I was anxious to know if he was prepared beforehand for the film to get into such sensitive areas.  Jez  was once again very candid about the whole thing.

Jez said “well, my view was that if we were going to do it then we had to be prepared for it all to come out.  It had all come out in an unauthorised book a few years ago anyway so it wasn’t as if no-one knew.  We have all been fairly messed up at times but when Dunstan said he wanted to use me as the main narrator I told him to ask me whatever he wanted to.”  Jez laughed as he said “so he did.”

Jez says that, whilst he hopes that his own experiences might help others to see that there is always a way through problems even when things seem hopeless, those things were not at the front of his mind.  Rather he says he was just happy for people to see him as he is, warts and all.

Jez wasn’t worried about how he came across but his biggest concern was about his Mum and Dad. Jez says “I didn’t really want them to hear all the gruesome details about the drugs and stuff.  They were really shocked and upset about all that stuff when the book came out but they had sort of forgotten about it all.  When they saw the film they really enjoyed it but said they were shocked about the drugs because they had forgotten about it all.”  I found it very touching, very human and very moving to hear Jez talk about his parents in this way  It is really clear that Jez cares deeply about them and that he loves and respects them deeply.  If Jez has any regrets about the life he has lived to date it would be any pain he has caused his family. 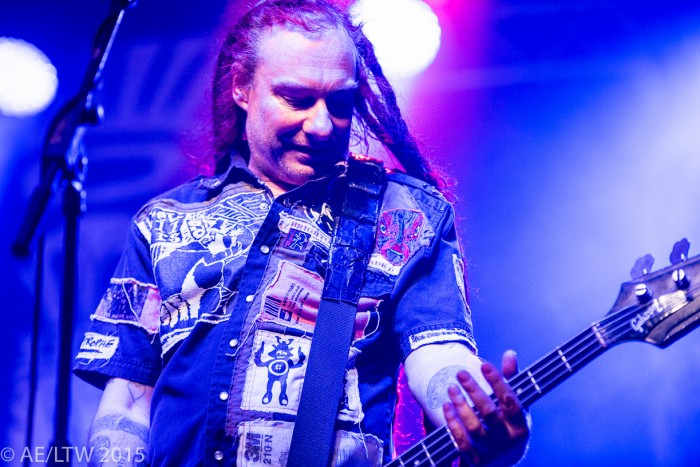 I had to ask Jez about a story that Frank Turner tells about when he went on tour with the Levellers a few years ago.  The Levellers got Frank into a drinking session and poor Frank threw up all over the tour bus, a cardinal sin.  Jez laughingly tells me that “Frank is a lightweight, we got into a real session and he threw up everywhere.  Frank left pint glasses of his vomit all over the bus and Stephen Boakes cleared it all up for him.”

That story led me into asking Jez why the Levellers had chosen Frank Turner, Billy Bragg, Imelda May and Bellowhead to work with when they recorded collaborations of some of their best loved songs for their epic greatest hits release last year.  The reasons where much more simple than I anticipated.  Jez explained “we just thought that those guys would do a good version and we knew they would be a lot of fun to work with.”

I asked Jez about when we would be likely to hear some new material from the Levellers.  Mark Chadwick has released two solo albums since the last Levellers album of original material.  I wondered if perhaps he was focussing on his solo work at present.  Not so according to Jez.

“Funny enough we have just had a couple of writing sessions for a new album.  Hopefully we will get something out next year.  Mark has written about ten songs and so have I.  Mark has written music and I have written lyrics so we are now all getting together to see what comes out.  The studio is rented out at present so we are all getting together in Charlie’s {Heather] living room.  We work things up with acoustic guitars and then go into the studio.” 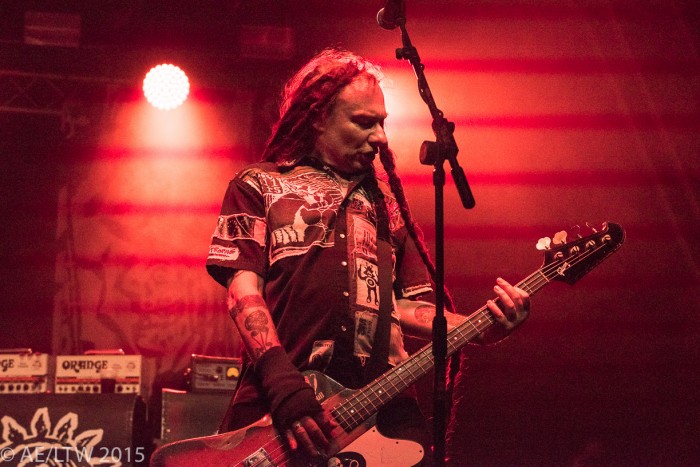 I finished my chat with Jez by talking about the Levellers Beautiful Days festival.  Jez explained that the idea came to them when they played ‘V’ Festival in 1999.  Jez said “we play a lot of those big festivals but that one was particularly horrific.  We watched the audience get pushed around and backstage was like the fall of the Roman Empire.  It just wasn’t our kind of thing we hated it.”

Jez continues “at the time there wasn’t really any medium sized festivals like Beautiful Days so we decided to do one.  We wanted to do one like the ones we used to go to.”

Jez admits that the first Beautiful Days was a terrifying experience.  “We all had to mortgage everything we owned, and I mean everything.  If it hadn’t sold out we would have all been bankrupt, we would have lost everything.  It didn’t sell out until about 2-weeks before.  We think people realise that any money the festival makes is rolled over until the next year  So we can afford to improve the festival and get more expensive headline acts but the festival won’t get any bigger.  We like the uniqueness of the festival and we want to stay that way.”

In my view the reason the Levellers are such an enduring band is that they too are unique.  They have never lost sight of their roots, they care about what they do and they care about the people around them.  Despite their success they are firmly grounded and Jez Cunningham is a great example of how the Levellers keep their feet firmly on the ground.

Jez Cunningham and the Levellers are on the internet here:  They are on Facebook and they Tweet as @the_levellers.  The Levellers Beautiful Days Festival is online here.