Home Music Bands Interview: Jess and the Ancient Ones 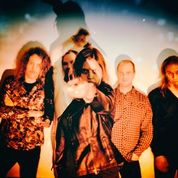 Jess and the Ancient Ones, from Finland, play an intoxicating and wonderfully quirky mix, of psychedelic, garage rock and metal music that, on their latest album Vertigo, reaches a new creative peak. Louder Than War caught up with Thomas, the band’s guitarist and songwriter, to ask about their influences, the new album, and when we might see them play live again in the UK.

LTW: At Louder Than War, we really loved the new Jess and the Ancient Ones album, Vertigo. Thank you for taking the time to talk about the band and its music.

Thomas: Hi there! Oh, that’s nice to hear, thank you for the support.

LTW: How has everyone in the band been during the pandemic? We hope you are all well.

Thomas: We are all good thank you for asking. We’ve been living our lives back here. All of us are working or studying, and the current situation has not affected those areas in any major way. At least not yet. We have a lot of new material in  pre-production at the moment, so we have been busy on that front while the world is locked.

LTW: The band was formed in 2010, can you say a little about how the band got together?

Thomas: A lust rose back then to write and play rock music. My past had been within the extreme metal scene, and I wanted to have a band that operates in a different field of music. Soon after that vision we had a line-up for Jess and the Ancient Ones. All the musicians were found nearby, and some were old friends. We recorded our first demo songs straight in the beginning of the band, and by that recording we got signed to Svart Records. It’s been a fantastic journey so far to say the least. The best is still yet to come!

LTW: In the music of Jess and the Ancient Ones, there seems to be a myriad of fascinating musical influences, including, for example, garage rock, metal, and even something of the west coast sound of The Doors and the Jefferson Airplane. What, for you, are the key musical influences on the band?

Thomas: We’re not afraid of change. I think many try to maintain their sound and style to please the masses, but we play selfishly to ourselves in a certain sense. The need and the want to explore is always there, and we follow that call without hesitation. All of us in Jess and the Ancient Ones are huge music lovers with a broad appetite for different bands, so I guess it also shows in our music.

I personally love the old nuggets movement and the primitive era of garage rock. Lately I have been listening to 90’s metal and alternative rock with the likes of Paradise Lost, Type O Negative, REM and Monster Magnet. Jazz, popcorn soul, funk and lo-fi trip-hop have also been on great consumption. Best newcomers that come to mind are Khruangbin and Boy Harsher. The subconscious reveals us through music.

LTW: On the new album Vertigo, the spoken samples and voiceovers, add a strangeness, that seems to echo the 1950s sci-fi/horror movie genre. Is that what you were aiming for?

Thomas: For me they add that small little extra kick to put the mood on. My advice to approach them is that one should think of them in their new surroundings. They become a part of different storylines and thus they transform to a new being. I love to take something old and give it a new meaning and a new surrounding. In a way it’s also almost like this sacred mission. To highlight these particular moments in history, and to evoke the feelings of yesterdays.

LTW: Summer Tripping Man, which was the first single off the album, is accompanied by a superb, animated video, created by Giuliano Di Girolamo. How did you team up, and what was the concept behind the video?

Thomas: I found him through Instagram, hah! The modern world shows its good sides sometimes I guess. There was an idea to have an old school styled animation video and so I started to look for videos behind certain hashtags. As soon as I saw Giuliano’s art, I knew that this is it. When he said he was interested in doing this, we had a minor discussion about the images that we wished to have on the video, and he proceeded from there on using also the lyrics of the song as a guideline. He is a great talent, and he did a huge job by doing it in the old school style. Much respect and love to him, a true artist.

LTW: Strange Earth Illusion, clocking in at over 11 minutes, feels to be Vertigo’s magnificent centrepiece, with all the key elements of the Jess and the Ancient Ones musical sound in place. Could you describe how the track was put together and recorded?

Thomas: Actually, we finished this track in the studio. We had the backbone ready before entering but we did some structural tweaks at the last moment. We recorded the base of the song live with all the main instruments and then added some layering guitars and keyboards here and there. The song had this cinematic feeling and we tried to follow its feel structurally. Not to return to repeat any parts except some verses.

LTW: I was lucky enough to see the band, when you played Glasgow in 2018, at the North of the Wall metal festival, I think perhaps your first ever UK gig. It was a great set that really won over the audience. What are your memories of the visit to Glasgow and the gig itself?

Thomas: I remember that evening very well. We enjoyed the beautiful city of Glasgow from the first glimpse to the last. The venue was really good, and the staff of the house were fantastic. They made us feel really welcome. We attacked with all guns blazing as we tried to match the intensity of the other acts, and the people seemed to enjoy it. We love being the odd bird in heavier festivals. After many hours of blasting, people are in need of something different, yet similar in spirit. I think we can offer you that. Also, the afterparty was great after the show, and we stayed there almost until the morning. The DJ was blasting out all of these great classics, and the beer was great! Met a lot of nice people there, and hope to travel back someday.

LTW: What touring plans do Jess and the Ancient Ones have, once touring is possible again? Might you return to the UK to play?

Thomas: The world seems to open up bit by bit, but we haven’t made any plans yet. We have a lot of new material in the pre-production phase, and we continue to work with them. Of course, if the opportunity comes to do shows, we’ll take it. We must come back to the UK to play. It’s been a wish of mine to do a row of shows in the UK, and someday it will happen. Take us to the nearest Helter Skelter please!

Best wishes to the UK! The home of the best bands in the world!

LTW: Thanks again for your time.

Listen to the brilliant Love Zombi from the Vertigo album here:

You can find Jess and the Ancient Ones on Bandcamp and Facebook.

All questions by Gareth Allen. You can find Gareth’s author profile here