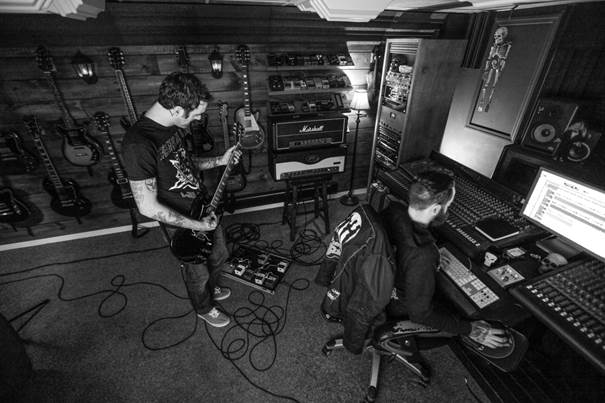 For Louder Than War, Sophie Sparham talks to Jeff Lohrber and Frank Godla from Milwaukee crust meets sludge meets metalcore band Enabler who think “The world is fucked…” and that the music they make is “…the soundtrack to it’s demise.”

Enabler have a new album due out later this Summer, off of which the first single, By Demons Denied, drops today. Perfect timing, then, for us to have a chat with the band at this year’s Temples Festival the day after the band had ripped the second stage apart with a towering late afternoon set of blistering bile and bombast.

But before we jump in with that interview, check out the A side off the new single, By Demons Denied…

Louder Than War: You guys played yesterday and the room exploded, how do you think it went?

Frank Godla: We didn’t really know what to expect. The vibe was awesome, people were loud and I ended the set with chills. I don’t think that’s ever happened before!

Jeff Lohrber: Yeah it was good. I like hearing loud guitars so that makes me happy. What caught me off guard is how many people were familiar with the band already, that got me stoked. It was flattering, we’re from the other side of the giant pond. It’s always a reminder of like wow, this is more than just playing the hall shows when I was 14. People actually really liked us and it’s out there.

Is it weird looking back to that time and seeing how far the band has come?

JL: When I started the band, I lived above a basement venue in Milwaukee and that was where we practiced at and that was where we played our first promoted show. It was very quick how it all got together, within three weeks of jamming together we were able just to play shows because it was my front house. It’s very different, we started playing in my basement, now we’re in Bristol with some of my favourite bands.

FG: This is just a dream come true to play with so many good bro in front of an audience who loves it.

How do we compare to the Americans?

FG: Well the accent is a little strange! No, you know metal heads are metal heads anywhere. The UK and Europe in general gets to see some of these bands less than the State does. The thought that it’s special for you guys makes us more stoked.

If you could be any other band on the line-up, who would you choose to be and why?

FG: I would say Converge, because Ben Cola is one of the best drummers in metal and hardcore. No matter how many times I’ve seen Converge I’m always excited to see them again.

JL: With Converge, even if I’m not already excited about seeing them, when they start playing I’m like ‘fuck yes’! I’ve listened to that band since 97, they just always progress as a band. That’s a weird question though, because I’ve never wanted to be anybody else! I’m happy with my own songs and my own band’s career.

FG: But if we can join Metallica, you can just let us know!

The show is kicking off your tour right?

FG: Yeah we’re flying home and immediately after touching down were getting in the van and starting the US and Canada tour.

JL: We’re calling it the Kill Frank or Frank dies tour, because he plays in Meek is Murder, so he’ll be doing double sets!

Have Meek is Murder played with Enabler before?

FG: We’ve never played a show together, but he’s come to see us practice before which is actually what lead to me to being in the band.

JL: I met Frank because he does Metal Injection and is a fan of the band and has interviewed me a whole bunch. I found myself in New York for a while last year and just ended up hanging out with Frank a lot. They invited me to their practice and I hate going to other band’s practices because I’m just sitting there like ‘cool’. I didn’t know that he was a good drummer! As soon as I knew we were having problems with our last drummer, I knew to ask Frank.

FG: Funny enough, I used to drag my friends to go see Enabler and I used to talk about them all the time as this really cool up and coming band. At one point me and my friend Nick was talking about how cool it would be if I played with them and here I am!

It’s so cool when you love that so much and you become part of it!

JL: I can relate, it was the same as when I joined Trap Them as the drummer. I saw them for the first time since I left the band last night and they were fucking awesome. It was really great to hear some of their songs live again. I knew them from when they were in Backstabbers, long ago and I really loved Backstabbers. As soon as Trap Them came out I knew I’d love them, I didn’t even have to listen to them! A couple of years later, I found myself behind the kit. We did a US tour with Napalm Death and being 23 years old and touring with Napalm Death was a really good life experience for me.

You’ve got a 7 inch coming out right? On the 2nd June?

JL: There’s a problem with the pressing plant so physical copies won’t be available in the US until two days later. We’ll have them at some point! This is probably the worst way to sell a record, it’s all the b sides from the album. I knew we would get it all on the album. I went into the studio with about an hour of material and you can’t release all that, but I don’t throw anything away. Every single piece of Enabler music that’s been recorded has been released. I’m not sitting on anything. It’s all out there.

It’s just a waste if not. It’s so hard to choose songs for the album.

JL: If people are checking out the band, the album is what they’ll listen to, but if they like us and check us out, they’ll realise that there’s thirteen other albums. I mean, if you become a fan we have a very large back catalogue that you can go through. If I was not in the band and found that out then I’d be excited about just the sheer amount of music. Even with the new record being released, we’re working on a lot of new material post that. You know, we always want to push the sound and be creative.

It was a weird decision to release a 7 inch of b sides before the album comes out, but I figure if we can sell the band on the songs that didn’t make the album, then they’ll probably like the album.

FG: I think of it as an appetizer. If you like the 7 inch then you’ll love the record.

That’s a good way to view it.

JL: But you don’t always need the appetizer.

~
ENABLER’s By Demons Denied comes with two exclusive b-sides, “The Flame” and “Some Things Are Worth Living For”. As we learnt above the physical has been delayed but you can still pre-order it from the band’s Big Cartel. The digital, meanwhile, can be picked up at their Bandcamp.

The band are touring extensively throughout June, as mentioned above, check their website for details: enablerband.com.