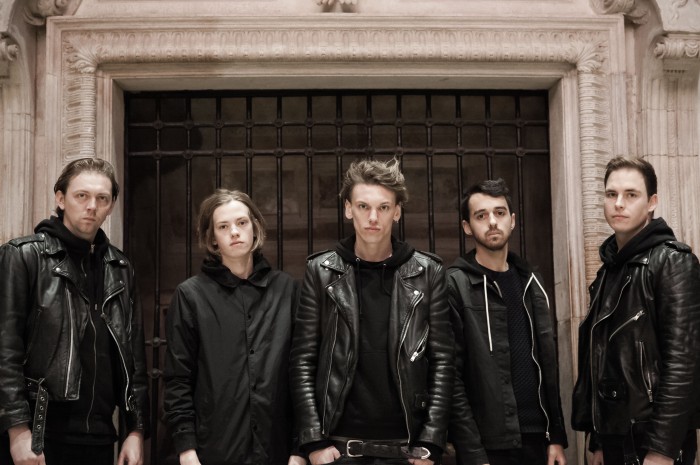 Fresh from the swimming pool, you could probably still smell the chlorine on his shaggy blonde hair, Jamie Campbell Bower broke up his day’s routine to discuss his new band, Counterfeit. He spoke to Abigail Gillibrand about the death of The Darling Buds and how a regressed leash of anger suddenly started to manifest its way out of him and provoked the beginning of this new project.

“Singing about butterflies and kisses wasn’t my vibe anymore,” Jamie’s eloquent London accent expressed on the other end of the phone. “I put The Darling Buds to bed as it wasn’t representing how I was feeling at the time.”

After his engagement to actress Bonnie Wright was called off in 2012, and his relationship with Lily Collins [Phil Collins’ daughter] also came to an end last year, it is understandable how this boy no longer wanted to sing quaint love songs.

“I found myself at the wrong side of 25. I wasn’t the young spritely man that I was. I’d been potentially hiding this anger I had for quite some time, and I think that’s dangerous for anyone to do.” His voice was gentle but there was a certain unease about him discussing his feelings. He has always been known as an emotional person – earlier on in the interview he claimed to constantly be on the brink of tears.

Suddenly the phone line was cut dead. Had these supressed feelings of rage really brought him to hang up on me?

Luckily it was just a technical malfunction and Jamie phoned back minutes later sounding a lot chirpier.

It is true what he says, in the tracks Counterfeit have released online there is an overriding sense of menace locked up throughout them. However, this antagonism is juxtaposed alongside Jamie’s vulnerability and an exposure of honest and deep emotion really comes through in his lyrics.

“The personal stuff that’s on the record isn’t really anything I’ll go into in depth. If people want to read into the words, it’s all laid down there for them to see. It’s not particularly something that I want to discuss because to me those emotions I was feeling at the time are very real.

“My cathartic process is one that where I write it and I perform it on stage and then that’s it.”

Jamie has been familiar with the music industry from a very early age. When he was around ten years old, his mum worked with a band called Kashmir. He recalled how he would fly out to the States with her whilst they were working on their album The Good Life. At around the same time he also recorded a spoken word piece for a Kenny Loggins’ Christmas Album.

“It was fucking weird. But that’s my claim to fame, Kenny Loggins has me on one of his Christmas records,” he said full of amusement.

With this early introduction to a rock and roll lifestyle, entering the studio to record Counterfeit’s first album isn’t anything new to him.

“We have recorded around 12 songs at the moment, there are only four that are unwritten. Our aim is to have 15 tracks to choose from for a 10 track album.”

There’s a contemporary, Punk-Rock feel to Counterfeit’s sound. Jamie’s gravelly voice reverberates around background guitar solos and drum beats that seem to take over your mind. Along with this heavy side, there are also aspects of the band that are reminiscent of the Pop-Punk Blink 182 days. Even though they have very much been birthed out of a studio, they manage to capture a raw, stripped back sound to their songs.

“My guitarist Tristan, is very into digital manipulation of guitar sounds, and I am very much plug it in and fucking go. I don’t like guitar pedals on stage I don’t like extra reverbs, I just want it to sound how it actually does.”

Their whole album is being recorded on Blackstar Series one 100 amps.  “There are two setting on that” Jamie explains, “it’s basically louder and really fucking loud.

“Our producer manages to capture that live sound. Like Nirvana, any of their albums all have that live energy to them. For us it was important to have that live, kinetic feel to it.”

Jamie strikes me as a city creature. Someone who is well travelled and well read. There is a high level of energy in the way he speaks, you can tell he is devoted and full of passion for his craft. When on stage he always finishes his performances, dripping head to toe in sweat, blood pumped veins standing proud in streaks on his neck.

“I play my instrument like it’s about to die, like I’m throttling it. At the end of the day I’m not the world’s greatest guitarist and I would never stand up and say I am, but I will however say that I put more passion into it than I have seen in a lot of other people.”

Counterfeit have this rouged, yet sophisticated style about them. On stage and off, Jamie effortlessly always looks good – I mean, with cheekbones that would even put The Thin White Duke’s to shame, he can’t really go wrong. “The uniform for the band is black,” he stated. “We were all weird kids growing up and were deemed weird by society, so our style isn’t anything we really thought about.

“For us, dark clothes have always been our thing.”

With only three songs online for the taking, Counterfeit have grown an incredibly sized fan base. Although a lot of this is off the band’s own back, Jamie is not only known for his music career but is also an esteemed actor. He first came onto the scene at the age of 18 where he starred alongside Johnny Depp in Tim Burton’s musical, Sweeney Todd. As part of the production of this film, Jamie got his first taste of recording an album in a professional studio.

Working with Johnny Depp kick-started his career and was a one way ticket to fame.

“I wouldn’t say the entire success of the band has come about because of me being an actor. We were offered a platform to promote this band as perhaps I wasn’t an actor we wouldn’t have been able to, and we’re very grateful for this.

“I possibly could have alienated a few too, and I’m into that. I’m into pissing people off and making people a bit weirded out by what they’re listening to. But at the end of the day this isn’t Jamie Campbell Bower does music. When I do music it’s Jamie Bower, they’re two completely different entities of me. And I love them both. Equally.”

He explains how keeping up with both Counterfeit and his acting life is extremely difficult but in the same breath he thrives from this fast paced environment. “I am in the best mental and state of mind when I am busy. For me down time is really dangerous. I become quite lethargic quite depressed. But it turns out when I’m super busy I can write like a mother fucker.”

One minute he’s on tour, the next he is filming and then he goes straight back on tour with only one days rest.

“It is hard. But I wouldn’t want it any other way. We are all the architects of the life we live in. I have chosen this life so if I all of a sudden want to press the eject button what would be the point when I’ve worked so hard for it all?”

Counterfeit are taking to the road in April for their second European tour, starting in the UK.

“It’s now time for us to prove ourselves and that does bring a slight fear and trepidation.”

To hear more from Counterfeit check out their SoundCloud. And see their website for information on their tour dates.