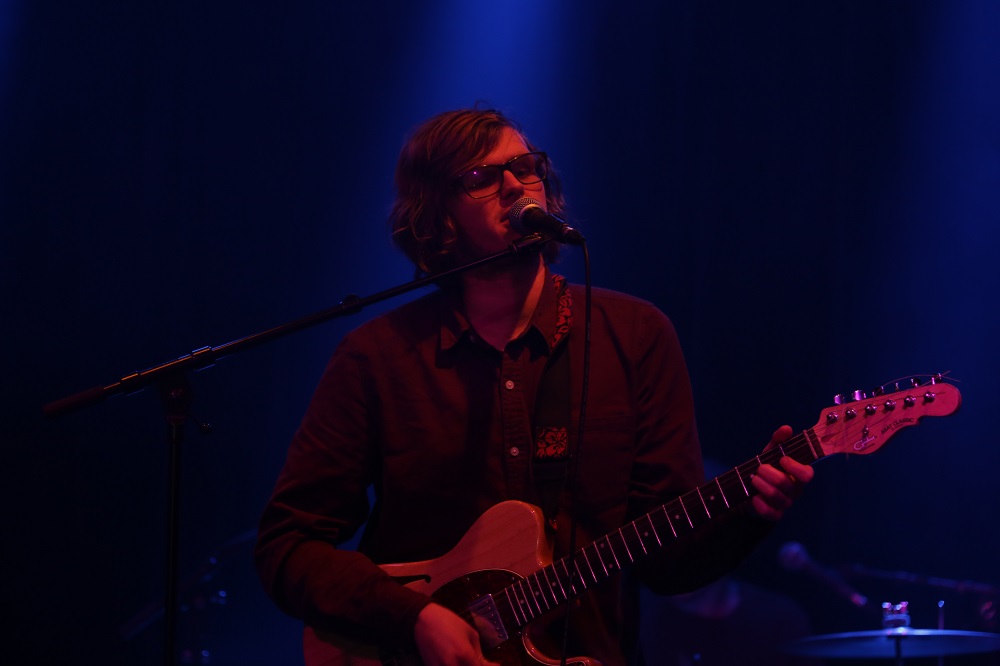 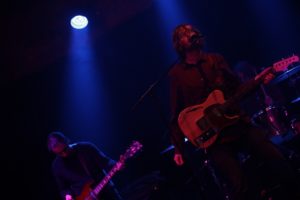 Post War Glamour Girls are about to release their third Album Swan Songs and their vocalist/guitarist James Smith tells us about how they dramatically changed their recording methods.

Post War Glamour Girls have been one of the best bands on the Leeds scene for some years but when it came to recording their tricky third album Swan Songs they decided on a a radical approach to reignite their passion.

The four band members decided to remove themselves from their home city and for singer/guitarist James Smith their decision to go on a 450 mile odyssey to the deepest wilds of northern Scotland was just what the band needed.

“The difference between the three albums was that the first one we did really fast in four days, and we’d only come out of uni so we were unemployed at the time, but it was like everyone had all the time in the world,” says James . “The second one we booked out a longer period in the same studio, but were barely in there at the same time as we were working, so it was more of a sporadic process.

“For the third we decided if we were going be in Leeds we would be working so we decided to remove ourselves from the city. Jamie Lockhart was co-producing this album and his parents live in Scotland on the far north coast of Scotland in a place called Skerray which is a 12 hour drive from here.”

Jamie’s handy dad had converted one of his disused sheds into a mixing room and studio so along with co-producer Lee Smith he set about getting down to work with the band who were coming to terms with being on the very edge of civilisation.

“We had to throw all the cables over the roof of the cottage we stayed in, and we spent two weeks with no Internet, and there was no phone signal unless you walked two miles up a hill,” laughs Smith,, “So we were totally lost and it was ace. It was what we wanted to happen and it was even more isolated than we intended.

“We definitely went in there with everything much looser and that getaway afforded us the chance to write on the spot not having to worry about the time constraints we had last time. About six of the tracks we hadn’t even played live so we had a beginning, a murky middle and a loose end.”

Once the band’s gear was set up and the desk in place all four musicians used the isolation to radically change their way of working free of the restrictions of paying by the hour for a flash studio as they created the tracks that make up Swan Songs which is released on 17 April on Hide & Seek Records.

“The idea was we would do a track a day, so it was a lightening in a bottle mentality, and we’d hit record after we played it through three or four times. Most of them were within four or five takes and we played them live together.

“We’ve never worked like that before as we’ve always been more militant and rigid in terms of structures, and having it finished beforehand, whereas up there we could record any time day or night as Lee or Jamie were on always on hand to pop out to the shed.

“Imagine what is like being in a real band when you don’t have to think: ‘Shit, I have to be at work in two hours so l’d better get this right.’”

The band used their time free from the tyranny of electronic gadgets to think about what they were doing which has resulted in a mature record that has much more space allowing their catchy new songs time to really breathe.

“I think it’s taken us three albums to have the confidence to do that and we wrote the songs to play them live as a band so apart from a couple of songs with strings that’s not much more other than what the four of us played in a room,” notes Smith

“With the earlier records we knew the songs inside out so we thought what can we put on top where with these new ones we spent a lot longer getting it right. The space thing was intentional and came off better than we thought we would but a lot of that comes to down to James Thorpe, who plays lead, and is a really spacial player with a considered approach to music. We focused more on melody and structures and less on piling on the ideas.

“Although it sounds darker lyrically there is probably a more positive message overall on this one. I wanted to highlight all the shit that is going on and getting people to look after each other and do what you can to care for other people. It’s not about berating the powers that be, but taking power away from them ,and giving things back to each other.”

Perhaps all bands should take some time out like the Post War Glamour Girls as they seemed reenergised and much more relaxed onstage at a one off gig for the Come Play With Me label at Hebden Bridge Trades Club.

“We had a big chat about where we were at three albums in so we agreed we needed to enjoy it and we were only putting pressure on ourselves,” muses Smith. “Instantly the whole thing became like it was five years ago when we were playing early shows, and it felt like that at the Trades Club.

“You just have to engage with people as a couple of years ago I was in such weird place mentally copying the bands I liked and really tried to aggravate the audience. I thought that it‘s not really me, so our approach is to be as open and welcoming as we can as the anger is still in the music, but we just have a lot of fun at gigs. The audience isn’t the enemy.”

Interview by Paul Clarke. Find more from Paul in his LTW author profile.