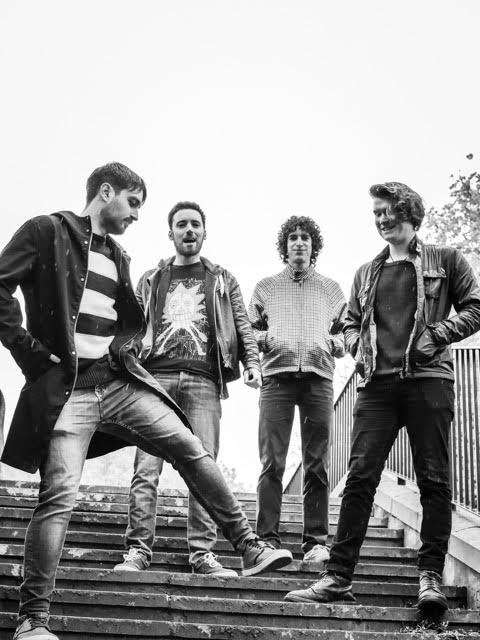 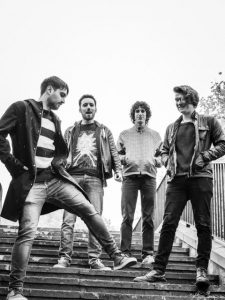 When James Mainwaring arrived at Leeds College of Music little did he think his intensive saxophone training would lead to forming Roller Trio who out of nowhere picked up a Mercury Prize nomination as the award’s annual nod to jazz musicians.

Their self-titled debut is a breathtaking ride, but after a period of relentless touring Roller Trio took an extended break, and James pulled together a new band RIIB who have just released their debut single Conveyor Belt on Come Play With Me.

The song came about after James went into his annual song writing hibernation knocking out some tunes that drew the attention of promoters and won him some acoustic gigs. But just as he was getting ready to kick start RIIB he got a call to play sax on a tour that he just couldn’t turn down

“I got a phone call asking me to go on tour with Django Django who I’d met at the Mercury Prize 2012 as my other band Roller Trio was nominated for that”, recalls James. “I went on tour with them for a year and a half, and they got me playing a couple of tunes on guitar as well as sax. I was inspired by the whole experience and I like writing songs.

“When I was on tour there was lots of time when I would normally practice my saxophone, but I couldn’t do that without pissing loads off people off, and having things chucked at me – which did happen a couple of times. I ended up writing loads of lyrics over odd time signatures without having to fit into 4/4 or 3/4. That is the academic side of me but that has calmed down a bit.”

After four albums, the Roller Trio hiatus was partly caused by the band’s hectic schedule, and a change in circumstances for one of the tight knit trio.

“The three of us were quite keen on RIIB and we all wanted to do that and have a break from Roller Trio which went on and on.”, notes Mainwaring. “Luke the bassist slash guitarist moved down to London and it got more and more difficult as Roller Trio was a collaborative thing. The way we wrote was rehearsing for hours and hours every day and for weeks so that became pretty impossible.

“We still got emails offering us gigs and we were offered a gig in South Korea so me and Luke were ‘come on, let’s do it’. We recruited a new guitarist called Chris Sharkey and we’re recording a new Roller Trio album, but RIIB is a priority for me at the moment.”

Getting round to releasing a single focused Mainwaring’s mind as he began to assemble a quartet who can meet his high musical standards. The first result is Conveyor Belt – which although it has tinges of Mainwaring’s jazz discipline – is more punkier than his usual material with echoes of another Leeds band, Gang of Four

“The line-up has settled a bit as originally I just added a keyboard player Josh Weller to it and I had three rehearsals last week so he has picked up the old tunes really quickly, and he is an interesting musician and producer too. The idea is to write more collaboratively, but so far it’s me taking songs to the band and arranging it together which is normal.”

Neil Young and Willie Nelson created Farm Aid to help America’s farmers, but it is unusual for a British band’s debut single to focus on the trials and tribulations of the US agricultural system.

“The story behind that is I watched a documentary called Food Inc. so I just picked up my guitar and the Conveyor Belt come out,” says Mainwaring. “Some of the time I write intensively for a few days or it might happen over months as I revisit the songs. I half improvised it and I was inspired after watching that documentary as lots of feelings came out.

“Farming is not great over here either as my parents recently rescued some battery chickens and I was hearing about where they came from. They couldn’t move in their cages and the lights were on all the time so they didn’t know if it was night or day just to make them lay more eggs. I was like “what the fuck!’”

Conveyor Belt comes out on indie label Come Play With Me run by Tony Ereira who releases double A side singles from up and coming bands in the Leeds City Region. This time RIIB are sharing a single with Furr who are also based in Leeds.

“Tony is such a great guy, and really believes in the Leeds scene, I think a lot of people think he is crazy for doing it. We’re an up and coming band without a massive fanbase so without Come Play With Me there wouldn’t be opportunities like this for us.

“I came out of college finding out about arts council grants, and knew how to start making a career out of jazz straight away, but with this sort of music it’s not the same so having someone like Tony to give advice is great.”