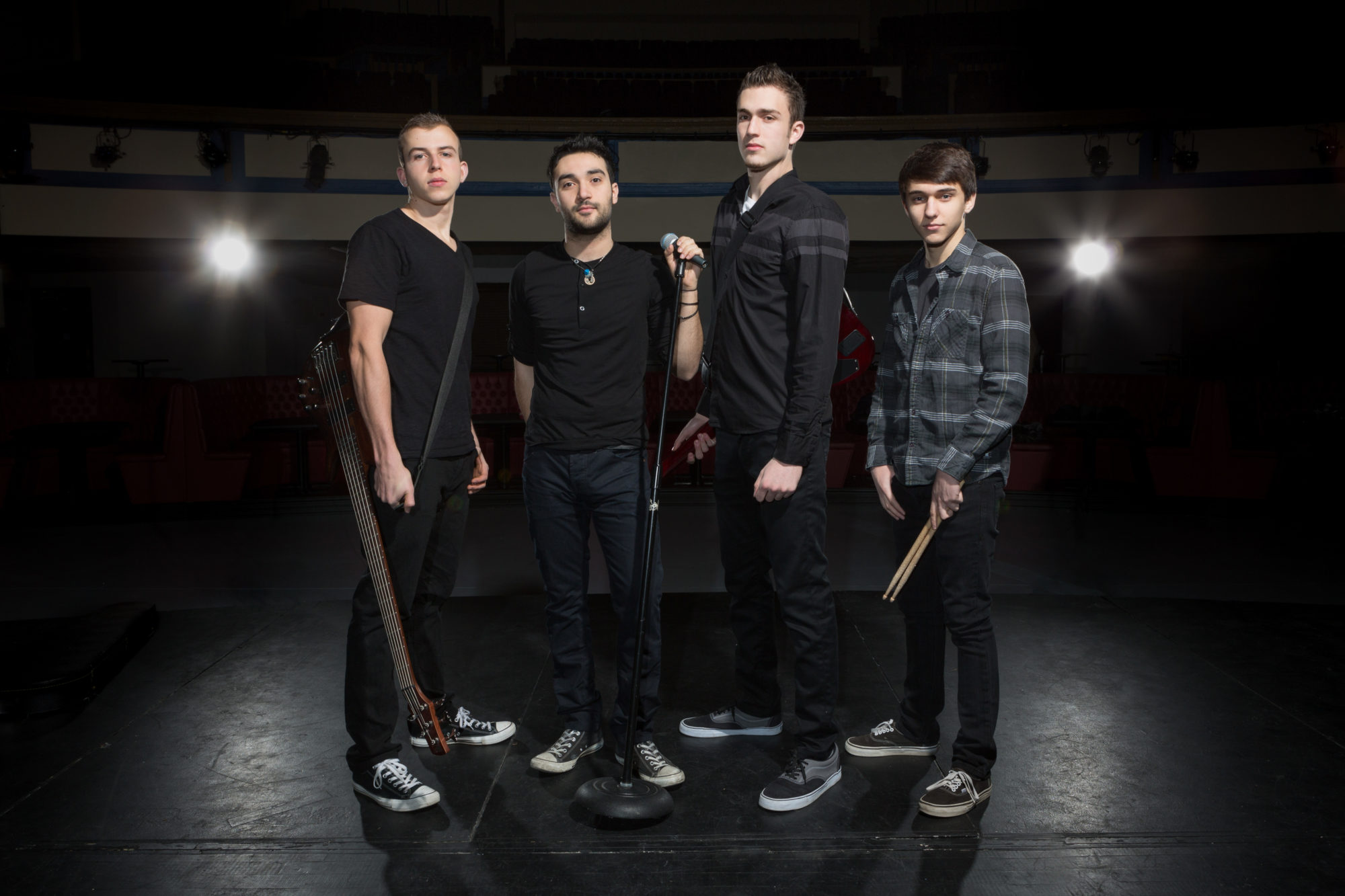 One of the most professional, musically put together bands, yet fun and drama free is Canada’s Autumn Kings. Shocked to discover that they were only out of High School, and together only two years, Louder Than War’s Eileen Shapiro talks with lead guitarist/vocalist, Jake Diab. 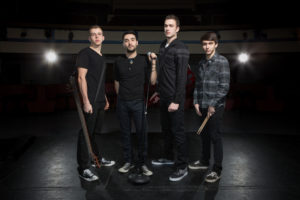 A cross between, Green Day, Maroon 5, and Hot Chili Peppers, the band’s members include: Jake Diab, guitar/vocals, Joseph Coccimiglio, lead vocals, Tibor Bognar, bass, and drums by Jeremie Brousseau. The band was chosen, out of 118 bands, to tour Canada for four months, and to be part of the LiveDifferent 100- show high school tour. Within three weeks of launching their EP they moved 1000 copies.

Louder Than War: I just love your band! How old are you?

How long have you all been playing together?

We’ve been together for almost two years. Me and the drummer, the drummer is 18 years old, we’ve been playing together for about four years now. So we’ve been getting experience from the ground up, and working our way to get the chemistry that we have today in our band.

Me and the drummer actually met through a mutual friend, who taught our drummer how to play the drums. He was 14 years old, and I was 16. So we had played together in a few bands, that didn’t work out and weren’t too serious. We met the other two guys, Joe and Tibor through me. I had a high school music class with Tibor in my senior year, and Joe worked with me at a part time job. We got together at my house, and started jamming and rehearsing.

We knew from the very first band practice that this is a band we want to take to the highest level possible, have a serious crack at it, and make a living at it.

Will you guys be touring, say in the US?

Yes we are. We’re just looking for the right opportunity right now. We are ready to go at a moments notice. We are doing it wisely so that we’re not losing out on a ton of money, but US is our main target market.

Tell me about your new album.

We did a soft release for it last Friday for  Bandcamp and  Soundcloud online. Today we did the Spotify, iTunes, and YouTube release. The album is called, Silver Screens. It features 12 songs that we believe are our best work to date. It’s  a variety of rock, heavy rock, pop rock, Spanish, reggae, lots of influences put together in the 12 songs to give it a nice variety. Which is what we think is very important in our music.

You guys all seem so serious about your careers.

About  the music and about the career, we are 150% committed. Not to say that we are always serious, we like to have fun and joke around, but when it comes to the career we are definitely 150% committed. This is the way I like to put it, the way a medical school student would put their efforts into becoming a doctor, is the amount of effort we put into a music career, and becoming successful musicians.

Believe it or not I think we make mistakes every gig. Really small mistakes and nothing that the average listener would notice. I think that in the live performance what’s more important is your stage presence and your energy. We practice 4 to 5 days a week, so we have the music pretty down pat. If we took a year off and went back to practice again we would still probably play the songs just as well. It’s kind of like riding a bicycle. When we make a mistake we just shake it off and laugh about it. I think that people are forgiving too. It’s an honest mistake, and I think you can almost relate to it.

What kind of impression do you want to leave for the world?

The  impression we want to leave is, we are a band with a new twist on rock music, and bring it to the masses. When you listen to Autumn Kings music, we want you to think about a good time. We want you to relate to it in someway. There’s no specific way, there’s no  specific political message, or religious thing or anything like that. They are just  songs that the  rich man, the poor man, the one in between can relate to. When you listen back to our records, I want you to think back to the time when you were trying to talk to that girl, or you heard us at work, or you listened to us before you went for a ride. That’s the mark  we went to leave. It’s just great songs that resonate with people for a very, very long time.

That was a good answer.

We do a lot of interviews, and we have a lot of people giving us advice, we are still young guys, but we listen, so that we don’t sound like were some immature kids. It’s not what we want. We don’t want to be treated like that. Working with people who are 30, 40, 50 and 60 years old, has been a blessing for us because we’ve learned how to mature quickly and hold our own in conversations with people that are twice our age.

Jake, who is your favorite band?

I have three and one of the answers might be very shocking, well you might not understand why. I love Metallica. They are the guys who got me into playing music, and properly practicing. They really taught me how to discipline myself. If you can learn a complicated Metallica song, you can learn anything. My second favorite group would probably be Rise Against, they are a great punk band from Chicago. The third, this is the funny one, is actually Nickelback.  A lot of people make fun of them but, that’s partially the reason I like them so much. They came from a small town and they made their own success, writing their own music, and playing their own instruments. I always thought that was very admirable and they always put out successful albums.

Is there a song that you guys really love to perform live?

There is one in particular that I think is my favorite. It’s called Run From the Police. I love that song because it’s really up beat. With just the guitar, drums, bass, and vocals, it still sounds really full. It’s a pretty easy song to play, so you get to really move around and have fun. It’s totally not to be taken seriously, and I think that’s what I love about it. It’s really easy to get into. When we play it  for the fans we see their heads start to bob, early into this song. Also Illusion. We love that song, it’s definitely a step in the right direction, in terms of style, and where we are taking our sounds.

That’s my favourite. Who writes your music?

I do the bulk of the writing. Sometimes me and Joe will work on some lyrics. Usually I write the whole structure of the song, the instrumentation and all the music, with most of the melody, I’ll bring it to Joe like I said, and I’ll show the guys. They will lay down the drums and bass parts, and we start rehearsing over, over, and over until we know it’s perfect. That’s usually how our song writing goes. The process is very consistent. They are usually all written that way.

Well, what happens if the other band members hate it.

Oh right, it happens. There were times where I’ll bring a song that stylistically the guys might think it’s a catchy sounding song, but it’s not Autumn Kings. That’s just one of those things where we have to put the ego aside and serve the song and serve the band. So if the guys hear a song, and  it’s not great, I really don’t take offense to it. It might be something I can use in some other regard. I can give it to another artist who’s vocals will be better matched. There are definitely those instances, I mean for this album we wrote probably 100 songs and 88 of them got scrapped. We really carefully chose which we thought was the strongest to represent our band. It’s something that might be hard in the beginning for some people, but we learned to be just objective about it, and not subjective. The guys are very understanding and very open-minded.

Were you really smart in school?

I was, until I learned to play the guitar.

Your band had this tour that you were picked for out of 118 bands, how did you feel?

That was one of the most surreal feelings I ever had. At that time we had been a band for just about a year. To know that we were picked out of 118 bands, was a sign from up above, that we had to continue to do this for a long time. Especially considering that we were touring for four months. That’s something I’ve dreamed of doing since I was 15 years old. I remember when bands came to my high school, I thought of them as gods.

We got to tour as bandmates, and it was a great personal experience. We got to bond with each other, and learn to be patient with each other. Not to mention growing our fanbase tenfold, with 70 high schools and 25 thousand high school kids.  It was like a test. We knew after the four months that we still loved each other. We still hung out, and the next day I was having a beer with Tibor.

I think that’s a no brainier. I’d rather be respected. I think of artists that I’ve liked, and I think it’s more of a fad to me. My favorite bands are respected. Bands like the Chili Peppers, and Metallica, every song they put out there had that focus, just the effort. So when we put these 12 songs out on the album, that’s hours and hours of work, and making sure they were ten out of ten to us at least. When we die, 200 years later we want people to remember the songs, as great creations. So I’d rather be respected then just some pop artist that has a career for two years because someone else wrote their  song.