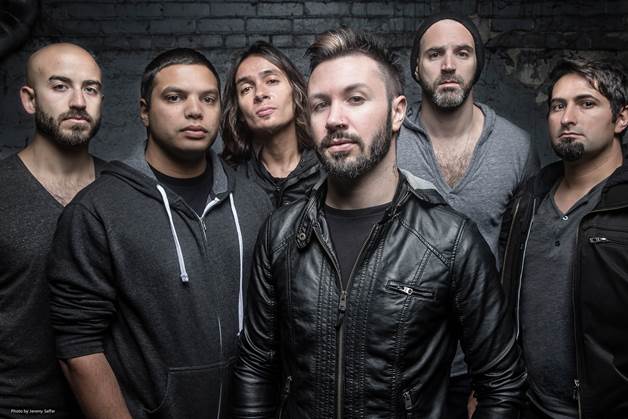 Sophie Sparham caught up with Periphery’s guitarist recent, Jake Bowen, to talk about the band’s recent tour with Devin Townsend, their latest album and future plans

What’s it been like being on tour with Devin Townsend?

It was like being on tour with your best friend, it was so easy and fun and hilarious. We just had really good times and as musicians, there’s a lot to look up to when it comes to the band.

Now tonight’s the headliner – how are you feeling?

Very excited, London is one of our biggest markets, it’s been like three years since we’ve played here. There’s also tones of great food so I’ll be stuffing myself tonight!

Also – has Matt been giving drumming lessons on the road – I’ve never known a band do that.

Yeah, we all used to give lessons on the road, but I took a more managerial role with the band now so I don’t give lessons anymore. Matt has been doing it for a long time and he’s very good at it. However, it’s really hard to fit lessons in, so I focus on the band more now, but it’s definitely worth it and fun!

No not really, we always have lots of material; the pressure came from picking the right songs for the albums. If we  knew we’d be happy with what we’d do then that was half the challenge and we were and if people like it and dig it then that’s a double achievement.

You’ve said that Alpha is the brighter and longer disc of the two – do you feel that each album has its own unique feel to it and was that done on purpose?

It was an accident. We wrote it as one long piece and decided that the right point to split it just happened to be the center point. It just worked out that way. The first half is short songs and more melodic. Whilst the second half is more darker musically and lyrically because of the way the story develops.

Tell me about the story…

We made an agreement not to tell the story until we have something to go along with it, like a book or a film. Then we will release it, we don’t just want to put it out there , we want to give the fans something. We have devoted fans that have come close to guessing the concept, but so far it’s still a secret.

Talk to me about Alpha the song – who came up with the music video concept?

That was Wes Richardson, who directed and animated the video. We’d already worked with him on past videos before. He just had a vibe about his videos and we wanted to make a video that had nothing to do with the concept of the albums as we didn’t want to give away the story. We had a standalone story and he came up with it.

You guys are considered pioneers of the Djent movement – how much would you agree with that statement?

I guess unintentionally we are! I’ve heard people say that before and I’m glad we’ve got a home in a genre of music but we never set out to do it. If it inspires people to write and take music seriously then I’m happy.

Are you at a point where you feel happy with your sound or is it always a work in progress?

We really settled into our sound nicely and agreed that by the third album we wanted to have our sound figured out. We succeed in that and we did it collaboratively, so being able to say that is multiple accomplishments for the band. I’m glad we all work well and civilly together – it’s a good feeling. We’re very lucky.

What project would you love to work on that you haven’t gotten round to?

Well, we all are working on our own solo stuff and some of it is outside of metal. And as far as the band goes, we have so much material they’ll be no shortage of ideas. I’m interested to see how far Juggernaut takes us, but I’m already ready to write new stuff. I need to pace myself!