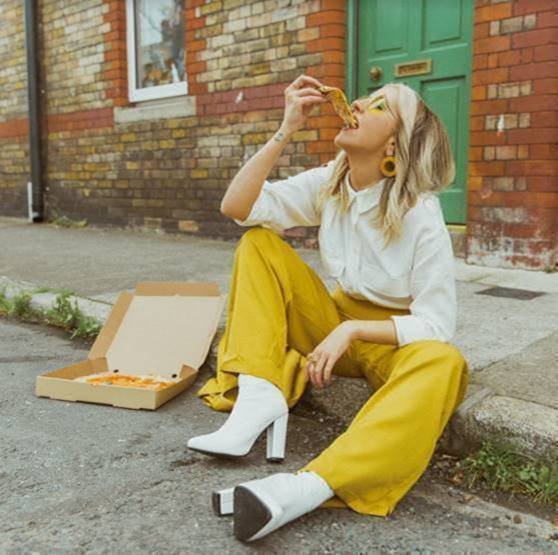 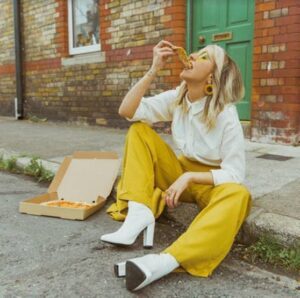 Laoise is the latest in what seems an endless conveyor belt of talented young female singer/songwriters bidding for chart success and 2021 should be the year she scores her first hit.

The Galway born singer has released a series of infectious electro-pop singles, including Healthy and Movies, but she started her musical career when her traditional music playing parents encouraged her to pick up a fiddle as a five year old. The personable 22 year old might be making more pop orientated records these days, but she earned her spurs in local folk sessions before taking up the guitar in secret.

“My hands are much more adapted to string instruments so I started teaching myself the guitar in secret even though my dad played,” recalls Laoise (pronounced Lee-sha).  “I didn’t really tell anyone so if somebody was coming home I would put the guitar down.

“When it came to singing I did it for myself, it felt much more personal, so it took me while to come out of that and start playing,  but it did lead me to loving melodies.”

Although Laoise was playing traditional music she never really felt like it was cool, like the songs her schoolfriends were listening to, so she turned to YouTube for inspiration.

“I remember being like probably 10 coming across Taylor Swift and just thinking ‘Oh my God, this is so cool’, and how much of an emphasis she put on songwriting.

“My sister would have shown me pop, and my dad would have showed me classic folk and rock bands. The first tape me and my sister probably had was Aqua’s Barbie Girl. There was a real mix, so I guess that’s why I end up making the music I do now, even though you’re not exactly hearing the complete Irish traditional melodic, Celtic vibes in my music.”

In normal times Laoise would have been out on the road promoting her new records, but like most musicians she has been forced to isolate, and at one point during the pandemic she was thinking of packing it all in.

“It’s being called an artist, even saying that sounds so funny, so I deal with a lot of impostor syndrome. I guess what was happening was my music was always a catharsis for me in terms of dealing with life, relationships things and things were going on around me, which I could then bring back into a song.

“I’m an independent artist, I do everything basically on my own, and then with my collaborator Sean Behan. As much as I love all of that, you could start to second guess yourself all the time. I wanted to learn a new way to approach my thoughts so that I could bring it back into my songwriting again.”

To help Laoise make sense of it all and keep making music she took the decision to see a therapist.

“I started therapy, it’s such a lovely way to pack up my thoughts in a different way and not be scared to really say things as I’m really feeling them,” notes Laoise.  “I have friends who I can talk to about anything, but there are certain things you can’t unsay to people, and sometimes you might be trying to process a thought and it comes out the wrong way.

“I felt like I was fighting my music at the same time, so I’ve been in therapy for a year now. It’s a really, really cool way to look at my thoughts in a new way, and my songwriting keeps changing because of that.”

“I escaped off to a small little island off the west coast of Ireland and there is probably like 150 people here. It’s calm, I’m living right on a beach, so watching that change every day, paying attention to nature and seeing how the world is going to keep ticking on and changing and developing is a nice mirror for myself.

“It’s been inspiring my music a lot, so I think I feel like I’ve just now taken a big, big breathe and I’m about to exhale.”

The new direction that Laoise is taking is very much in the model of a new generation of songwriters who are not afraid to write about feelings in a brutally honest way that can help their fans to deal with all the pressures of the modern world.

“It’s really nice to see this new type of songwriting where people are writing very, very bluntly about their lives. One who comes comes to mind is Sasha Sloan. and she has a song where the lyrics are like I’ve done all these things and it’s like, yes, because you’re human.

“I remember even coming into puberty and everyone dealing with it kind of differently.  I would talk to my girls at school and whatever it was that was kind of bugging of us it felt so liberating.  I can feel that sense of our generation not being scared to talk about things in comparison to the older generation.”