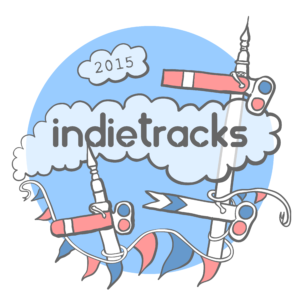 Taking place at a railway centre and with headliners this year of Cinerama, The Pains of Being Pure at Heart and The Go!Team Indietracks is the quirky little festival centred around camaraderie. We talk to Nat Hudson from the organising team about what makes Indietracks special.

There is something magical about standing on the platform looking out over the Derbyshire countryside and waiting for the Indietracks express to arrive.

Here is is quiet, vintage suitcases piled against the station wall, grass grows between the tracks.

This is a place from another time, a buffer between the modern world and the astonishing little festival at the other end of the line.

This year Indietracks (24-26 July, Midland Railway Centre, Derbyshire) will be headlined by Cinerama, The Pains of Being Pure at Heart and The Go!Team, with Martha, Euros Childs, The Wave Pictures, Mammoth Penguins, Catenary Wires, Evans the Death, Tigercats and more playing across the weekend.

Nat Hudson has been part of the volunteer organising group since the festival began and I recently spoke to her about what makes Indietracks such a special little festival.

Louder Than War: Now in its ninth year tell us the story of Indietracks. Where did the idea of the festival come from? What’s the ethos behind it? Why Midland Railway Centre?

Indietracks originally started as the brilliant idea of Stuart Mackay, who used to work at Midland Railway restoring the engines there. He was a massive indiepop fan, and had the idea of holding shows at the railway.

The first Indietracks event was a one-night affair in April 2007, held at Butterley station with just three bands. It sold out really quickly and was an absolutely brilliant evening, so Stuart then decided to hold a full festival in July that year, but at Swanwick Junction – the site we currently use for Indietracks.

It looked very different to the current festival – there was no outdoor stage or catering/merch stalls – and it was much, much smaller, but there was an amazing atmosphere and I think everyone knew he was onto something special. And of course since then the festival has continued to grow into the festival we all know today.

Sadly Stuart’s no longer involved as he now lives in California, but hopefully the team is continuing to run Indietracks in a way that matches up to his original vision!

In terms of our ethos, it’s very much a DIY, independent festival. We don’t have any corporate sponsorship and we try to support the independent music scene as much possible, providing a space for bands, record labels, promoters, DJs and fans to come together to celebrate the best indiepop music from across the world.

And – of course – the whole festival is held to raise money for the fantastic Midland Railway. They do so much to support the event – from working with the local council and booking stages to recruiting volunteers and making sure the fantastic real ale bar is stocked all weekend. We couldn’t do any of this without their amazing support!

Indiepop is a pretty tight (but friendly!) community and this is evident at the festival with camaraderie a key part of the atmosphere. You’re also all-round supporters of the site – how does it feel when things like the recent vandalism happen at the centre and how do the festival organisers and festival community react?

There have been a few vandalism attacks on the Midland Railway in the last few years and obviously, it’s very upsetting for both the railway staff and Team Indietracks when anything like this happens.

It’s such a beautiful old site, and when historical buildings are destroyed it can feel like a little bit of our heart is being ripped out. At times like this we often run an appeal to try and raise some money towards repairs, as the railway doesn’t have much money.

We’re very lucky in that all the Indietracks goers have been very generous in the past. For example when the windows of the railwaymen’s church were smashed in, Indietracks fans collectively donated over £1,000 to help get them repaired.

How important is being family friendly to the Indietracks make up?

It’s very important to us! As our festival goers get older and start to have families, we’re very keen to encourage them to bring them along and it’s always really lovely to see young kids enjoying the music.

We try to provide them with things to do – for example we often have craft and music workshops for children, there are sandpit and play areas, and of course the miniature railway and trains!

How do the music and railway enthusiasts interact over the weekend?

To be honest I think a lot of the hardcore railway enthusiasts probably come to the railway on other weekends, but I think we’ve converted a lot of indiepop fans into steam train enthusiasts themselves!

The railway has now started running guided tours of the railway museum (in full Victorian fancy dress no less!) and they have been really popular. Plus there are no shortage of railway staff around ready to tell you how certain engines work.

One of the most interesting chats I’ve ever had at Indietracks was with the man operating the steam roller, explaining how it worked!

How do you choose the line up?

There is a team of five of us – myself, Andy, Ian, Marianthi and Alice – who choose and book the line-up, and we get ideas from a variety of channels.

For example, there’s a thread on the Anorak messageboard where anyone can suggest bands they want to play at Indietracks, and we usually approach the most popular bands on that list.

We also invite bands to apply to play at the festival, and we listen to the hundreds of applications we receive and invite the exciting ones along.

Finally, we all of course have our own ideas of who we’d like to invite! We’ve all got slightly different tastes, which means we hopefully get a good mix of different types of bands,

What’s your personal highlight over all the years of Indietracks? And do you have a favourite part of the weekend generally?

Argh – such a difficult question to answer, there are so many! The first Indietracks was really special, and I’ll always remember the after-hours sing-along we had outside the main shed once the music was finished.

2009 was amazing – we brought in the large outdoor stage along with bands like Teenage Fanclub and Camera Obscura and it felt like we’d become a real, proper festival. Plus I’ll always remember dancing along to La Casa Azul’s “Love Is In The Air” that year with other members of Team Indietracks!

Allo Darlin were absolutely brilliant last year, Helen Love’s 2013 glitter bomb stage invasion was an hilarious moment, and I’ve also loved some of the smaller church sets over the years such as Stars of Aviation and The Magic Theatre. Like I say – there are too many to mention!

Who would be your dream booking?

Personally I’m a huge Euros Childs fan and I would absolutely love Gorky’s Zygotic Mynci to reform and come and play Indietracks. That would be a dream come true for me!

Of course, there are also a host of other bands we invite every year who would also be dream bookings, but I’m still hopefully we’ll get one or all of them so I don’t want to ruin the surprise!

Interview by Sarah Lay. You can find her on Twitter or read more from her on Louder Than War here.