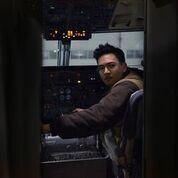 The most unusual, magical, and dramatic music has just come my way via the brain behind HundredMillionThousand, Noel Jon, presenting his debut album, LP1. Canadian born, Persian/Filipino producer, showcases a journey encased in mystery, suspense, aggressive darkness, and sonic aesthetics. Through his heritage he enchants his music with spiritual chants, Iranian glitter, Tombak, and hip-hop. The album is set to be unleashed on 8 April, but in the meanwhile enjoy his forbidding single Yalda.

Noel was completely different than I had imagined him to be. Pure genius! However unlike his music, he was emotionally shy. He was a fusion of technical ambiguity, electronic poetry, and deep passion, all spilling out into his music. After an hour the walls he hid behind came tumbling down in the form of exotic rocks, chemical engineering and Star Trek. He became easy to fall in love with, and his music is even easier.

Louder Than War: Your music is intriguing and it fascinates me, let’s talk about it.

Really? I make down-tempo, electronic, music influenced I guess by hip hop, and I like to always include a lot of cultural resonance inside of it. That’s what I do. It’s not very poppy but, I’m a dark dude.

Yes, you are. Where does that darkness originate?

I’d say the majority of this album was written during University, and I guess I was one of those people that did not have a good time at the University. I was in the wrong program, doing something to satisfy my parents, mental health stuff, which could go in a different direction. It’s more so I like introspective music, and music that doesn’t necessarily fit with a lot of people being around, like a group, a club, it’s definitely something in my own head. I think darkness is awesome. Everyone has a dark side, everyone has a sad side, and I have to embrace that.

I’m trying to get into that head, because that music is so different.

What set it apart?

It’s very unique, and I’ve never experienced anything like it. It’s very dramatic and emotional, but yet it’s up-beat, and some of it actually relaxing. It’s addictive. I kept having to go back for more, even when I was finished listening to it. It’s almost like a challenge. It draws you in there, and I’d like to discover what in you’re music makes that happen?

I don’t want to divulge my entire formula, but, I do a sense of space and atmosphere. I do not like snares. I am a percussion snob because I’m a drummer. I like powerful, capturing, melodies.

Where do you get people to record it with you?

I do not care a lot about lyrics. It has to be somewhere in the vibe, but if someone has a big, loud, addictive, sound, I get really drawn into that. So I basically say, ‘this is what I do’. I’ll show them a video, and just be a casual person, I try to show some humanness, and hopefully they’ll want to do it. Right now I’m reaching out to a female rapper in Toronto, who only raps in Tagalog, only in the Filipino language.

Do you speak Filipino?

I cannot speak Filipino or Farsi, because we were raised in an American household.

I think your music leans more to the Persian side.

Where or to whom do you hope to market your music?

Honestly right now social media. I’ve been producing for a long time but, being public about it is very new to me. I think there is a certain balance in not over selling yourself, but also to have people come see it, because you can’t just hide under a rock. I just want to go for the niche blogs. I’m not trying to make it commercialized. I’ll basically go to blogs, maybe promoters, niche places….

How would you tour or even perform this music live?

I have a show 4 May, in a boutique men’s store in Edmonton, where I live. In a live setting it’s a very much different experience. When you’re with people you want to be more up-tempo, more gripping. So, I incorporate a lot of visuals and projections, I’ll be doing my thing with my pads. It’s not like a DJ, like a standard Pioneer DJ, I kind of hate DJing.

I will have visuals of textures and colors that are referential to my sound. I do a lot of video work, so whenever I’m writing a song I always have colors in mind. I definitely don’t really see colors, I feel colors. In Exalted, I see blue and gold. It’s very deep and ambient. I also see glistening Sitars and rich sounds, so my visuals will basically have colors like that.

In between each song I have videos of Iranian poetry, and I arrange these poems in my songs. They’re like skits in an album. The entire live  experience is about 30 minutes long. It progresses like a story, and the audience obviously does not speak any Farsi, but it’s more the tone and the energy, and the video of the poet that’s kind of projecting a prelude to the next songs. In the beginning it will be kind of calm, suspenseful, and then halfway through her poem gets more live, energetic and proclaiming. It’s definitely an audio/visual experience, and it’s not dancie, I don’t DJ.

I conquer being a musician so I’m use to doing something interactive, giving all the energy to the crowd. I try to make it as dark and moody as it is, I try and make it intimate in a live setting.

I grew up playing  the piano, of course, in an Asian family….I was trained on the drums a bit less, and then I taught myself guitar, and then a little bit of band in high school. As far as like a super technical musician, I’m not really classically trained. I really know what I like to hear. I think my strength is my ear. I think I’m very good at hearing a song on the radio, and figuring it out, and playing it out. Sight reading…definitely not. It’s not me.

What do you study in college?

I’m finishing chemical engineering. I’ve been in school for a long time. It’s kind of dragged itself out. The song Exalted on my album, is really my best work, and I actually failed a test at the university finishing that video. It got premier on Noisy.

Is there anything that you want to promote for yourself?

I’m really much just about the music, and the relationship between the music and visuals. Listen to the album, tell me what you think.

Where do you want your music to be say in ten years?

Of course music is  not a career path that everyone can make a sustainable living on. I really want to get more into like scoring productions for film or video games. I don’t want to do the pop thing, always touring always doing albums, clocked into his schedule. I want to be economically stable, and just be more like an influence, because I don’t want to be the next pop producer. I think that people behind the scenes have a lot more influence of what’s going on, as opposed to just fame. It’s a longevity thing, like I’m married in a way.

I think a lot if my influences are a lot of weirdo producers that come out of London. I think tribal records is like my holy grail. I think that inadvertently my album took a lot of influences from cinema and the grandiosity of The Dark Night. When someone wants to know what kind of beats do I make, I say it’s like The Dark Night, rap music, its very gripping. People say my music is extremely masculine, but like it’s too much bravado.

Well your music is somewhat up-beat, but it does have a dark attitude.

On a first album it’s kind of like your child. You really wanted to be the best it could possibly be. A writer said that there was a certain questioning and searching in it. Those I themes that I don’t really try to create in my music, but it’s definitely part of me. When someone gathers is that it feels that you’ve really made something super honest.