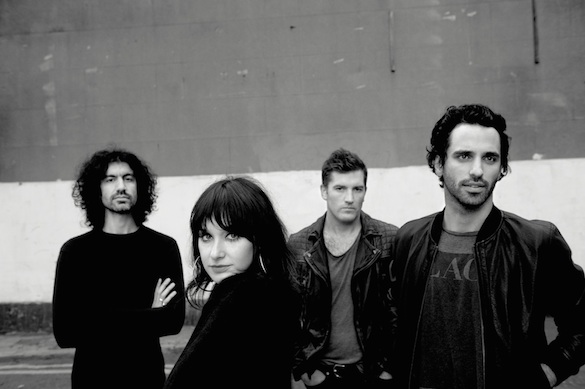 After a two-year hiatus which saw the band take stock of their lives away from the music, Howling Bells are back with a new bassist and new album, Heartstrings. Louder Than War caught up with them backstage before a comeback show at London’s Oslo to talk happiness, babies, recording an album in eleven days and how it was inspired by David Lynch.

Louder Than War: Your set list is quite heavy on the first record. Are you feeling nostalgic? It’s been almost 10 years…

Juanita Stein (vocalist/songwriter): Yeah. You know how marriages get a seven year itch? Maybe bands get a ten year itch. We’ve sort of reached this pinnacle in our career. Gary’s joined the band, which is great, so it feels like a nice place to start again from – our first record, and the one we’ve just done together.

Gary Daines (bassist): Coming into the first album (the band) had more time to write the songs. And with the other two, I guess there were more time constraints.

JS: Yeah, totally. The first record was a culmination of an entire life’s experiences. And with this record we’ve had a few years.

JS: I suppose it’s personal, in the way that I very much feel like a slow burner, or a late bloomer in life. Everything I approach, I approach with a passion and ambition, and I can never seem to grab that thing and I’m constantly chasing it. So Slowburn is, like, a frustration seething out of me.

Does it hark back, again, to the first record? You guys struggled to make it in the beginning ….

JS: When we moved here we had to start again, literally: find new friends, new jobs. And then ways to make money and escape to a house that didn’t fucking smell like mould and shit. So yeah.

What are those early, frustrating moments like? Having the same aspirations and musical dreams as, perhaps, everybody else; what keeps you going?

GD: Well, when we were recording some of the new songs, we weren’t thinking anything other than “this feels great”. The music coming together is the thing that keeps you going.

JS: There’s no space to not believe that anything other than what you’re doing is the right thing. There is, perhaps, misjudgement due to circumstances, and that happens to every artist at some point.

Tell us about the album process.

JS: It was very intense and quick! And, you know, that felt like the perfect thing for the nature of these songs. I think if we had the luxury of sitting around in a multi-million dollar studio, they’d be completely different. I remember just before we started recording, Catherine (Catherine J Marks: producer) called me up and said, “We’re not sure you guys have enough time to do it. Do you wanna maybe think about taking Christmas off and come back in the New Year?” But we made a conscious decision against that and just said, “No, stick us in the room and let’s do it”.

As an established band, you need to stay fresh. Approaching the album, was there ever a concern with achieving that?

JS: Well, first off, I think we know who we are. I have to say that with Gary coming into the band we’ve found our equilibrium, which is really nice because for a long time we’d been a bit rocky. Musically, it feels like we’ve found our balance. And we’re not going to pretend in any way shape or form that we’re the newest, youngest rats in the pack, because we’re not. And I think the best thing for us to do is to use that to our advantage and be this kick ass, older, wiser band.

You’ve supported a lot of massive bands, Coldplay and Elbow for example, the latter who toiled away for years then struck worldwide success with their fourth album. Is there ever the hope that you’ll do the same?

JS: No, we hope to move in dingy dungeons for the rest of our lives. (laughs)I’m kidding! Of course! That’s the hope, isn’t it?

A lot of bands actually just want to be happy, give something back to the fans and not sell out.

JS: Oh, I wanna sell out. I wanna fucking play O2, all the rest of it.

Well, it’s worked for Ricky Wilson, hasn’t it? Kaiser Chiefs lost their direction for several years, then he accepts a place on the panel of The Voice and now they’re celebrating another number one album…

GD: We do wanna be happy too!

How have your personal lives affected the album?

JS: For me, obviously having a baby had a big impact on the song writing; when that happens, your priorities and emphasis on things changes. I kind of anticipated I would be a lot more manic and insane after having a child, but actually I found that I was the most comfortable in my skin I had ever been.

Does London still inspire you?

GD: Yeah, it does. With London being so big, people always coming and going, and areas changing all the time, it’s constantly reinventing itself, it’s constantly exciting. And you can never get bored. If you’re done with one area, you know, you can just go somewhere else!

What are the musical influences for Heartstrings?

JS: I feel more influenced by films. I mean, obviously there’s music, but I can’t think of one album that collectively influenced us. There were a lot of film references from Catherine actually, you know, she’d be like, “make this sound like Sergio Leone” the Wild West composer, or encourage us to listen to certain composers or soundtracks. I remember sending these guys an email before we started recording, saying, “watch Paris/Texas, watch Blue Velvet, then let’s go and make a record”.

GD: A lot of the songs have very strong visuals which come from that.

How do you guys write songs, typically? Has there always been a set formula?

JS: It’s changed with every record, really. The first one I more or less wrote in my bedroom, and that came from break ups and make ups and life. The second and third were heavily co-written with the band. And this record was written in my basement. Most of the songs were written over a couple of weeks at my house, but mostly it was me sending the songs to the guys then working out arrangements.

What affect did Catherine have on the record?

GD: She had great energy. If we were just standing around at the end of the day, feeling tired, she’d be there saying, “come on!”

JS: I loved that. We’ve never had that experience with a producer before where they’ve literally kicked us up the ass and said, “Get the fuck in there and do it”. She’s a very strong character, and a Leo, if you’re into star signs! She is brilliant and strong willed.

GD: It was never a dictatorship, but her general enthusiasm was very infectious.

JS: I don’t mean this in any kind of sexist way, but I don’t think a man could have got the same results out of me. I’d be doing vocal take after vocal take just with Catherine, and I felt especially intimate and close to her. I don’t think I could have let my guard down so much if it wasn’t for her.

What are your thoughts on music in 2014, when previously the only way to listen to an album was to go out and buy it? With putting your heart into an album as a whole, does it worry you that people may only listen to a couple of songs on Spotify?

JS: The process of anticipation is, in a way, tarnished.

GD: It’s good in terms of the fact that it’s accessible. I suppose you do worry that people won’t get a picture of the whole album by listening to one or two tracks. But having said that, when checking out a band you tend to start at the first song and go through anyway.

JS: It’s an especially single orientated market. We and all of our friends listen to records, but the majority of the world buys singles. That’s difficult to compete with, so I guess it comes down to being comfortable with who you are as a band. And that’s how we’ll continue to walk down the road. I mean, I can’t compete with Katy Perry… that’s insane!

What can we expect from the live shows?

JS: Passion, glory… and hopefully good lights! But more importantly, good songs. We really, really believe in the record we’ve made, and what else can you do but give that to an audience and hope they respond?

The new Howling Bells single “Slowburn” is out now. Their album “Heartstrings” will be released on 2nd June.

All words by Richard Gilbert-Cross. Find more by Richard on Louder Than War.

Adam Green & Binki Shapiro: “we were each other’s only real...

May 7, 2013
We use cookies to ensure that we give you the best experience on our website. If you continue to use this site we will assume that you are happy with it.Ok