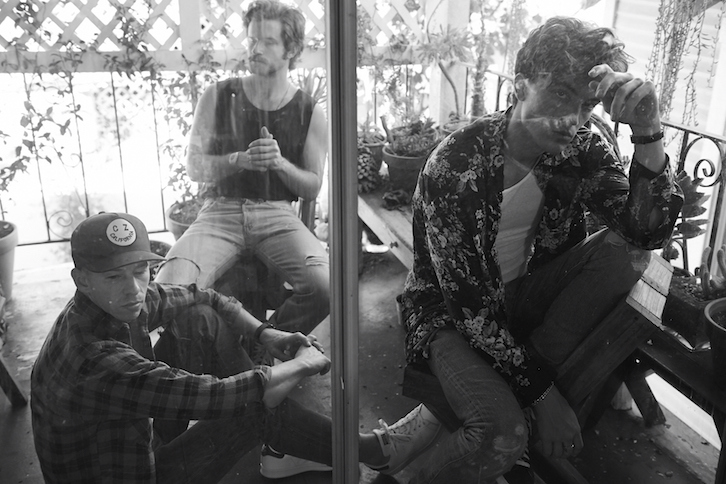 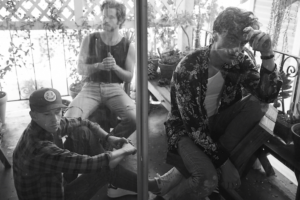 You’d be hard pressed to find a less rock‘n’roll gig than opening an arena show at 7pm to bemused fans of the headline act who don’t know who you are and care even less but LA based electro popsters Lany are really going for it at Leeds Arena as they prop up the bill on the Ellie Goulding tour trying to entertain a collection of her disinterested fans huddled vacantly around the headliner’s empty runway into the crowd.

But given their backstory it’s not surprising that singer Paul Klein, drummer Jake Goss and techno geek Les Priest are all loving their first taste of the big time as it is only a year since they recorded their first song.

“We all met in Nashville where Jake was an incredible drummer; and Nashville is a session town so he’s played on lots of records,” says Paul. “I was on the opposite end of that spectrum, struggling and failing and couldn’t get anything off the ground. Les was the best kept secret in Nashville, where he was working at the post office, but he is a genius engineer, producer and mixer.

“I wound up moving to LA by myself just to change scenes, and see if I could figure something else out, but I came really, really close to quitting music. The other two were making music for the fun out it of their bedroom, so I called to see if I could join in.”

Permission was granted so Klein took full advantage of the opportunity to work with his old friends in an attempt to kickstart their drifting careers.

“I flew back to Nashville and in four days we recorded two songs, Hot Lights and Walk Away. We put them on the Internet, and in six days we got our first email from a record label, which was crazy as we’d created this Soundcloud file and had zero followers.”

Pretty much the dream moment for an ambitious young band, but the interest came from an unexpected source.

“It was initially everybody in the UK so it was Polydor, Parlaphone, Island UK which transitioned into US interest too,” recalls Les who still seems in shock at the rapid response.

After the productive Nashville session the trio moved back to Paul’s small apartment in Hollywood and using Priest’s tech smarts got down to recoding some more of their trademark angsty synth based pop with live guitars and drums thrown into the mix.

“All of our instruments were in the kitchen and it looked like a guitar centre in our apartment,” smiles Klein. “It was a one bedroomed apartment so for the first month we all slept in the same bedroom before Les moved out to the TV room where his computer was, and he slept under that for a year.

“We are still doing it all on the computer so when we signed to Polydor they have a recording budget, but we wanted to do it on our own. We asked if we could use some of that budget to get out of the one bedroomed apartment and we now have a little house outside the city.”

Lany are of that generation of bands who just assume social media is part of the deal to reach a bigger audience and Klein made it clear to the label that they weren’t handing over their domain names and passwords.

“Last summer I tweeted ‘from an apartment to an arena’ which is where I wanted Lany to go and here we are. We are so thankful and it’s absolutely nuts as we’ve never played so far away from people in our entire lives. In the soundcheck today I was just thinking this sounds so huge.”

“There is huge crew and they all amazing so it’s a little like a family,” interjects a clearly overwhelmed Jake Goss. “There’s three guys on stage helping us and we met John Newman who is second on the bill, and he was so kind. We’re warming up for the warm up act. To be here after doing our first show a year ago is just insane.”

A cynic might think major label backing leading to an arena tour is part of a tendency for bands to break big without the usual slog to the top that brings band valuable experiences.

“We have paid our dues because before Lany we have been trying out things for years,” fires back Klein. “When we first decided to play live we took whatever tour or show we could. I have been shirtless hanging off a stage in Saskatoon, Saskatchewan to close to zero people. I think there were other people, but this room was huge so I couldn’t see them.

“We just decided to go hard whether it was playing to one person or one thousand because that one person is worth it.”

The Leeds show proved that as the charismatic Klein needed to jump on Goss’ drums to wake the crowd up a bit. But building an audience is still Lany’s focus so they kept working on their day off.

“I think it is testament to our band that on this arena tour we drove three hours back to London to play for 200 people in the Barfly, and it was completely sold out,” says Klein. “We had to get in the van and drive back this morning so we’re playing our dues, and not skipping any steps, as it would have been really easy to just chill out on our day off.

“Imagine doing a 120 shows a year for people who have no idea who you are and then you play a headline when you had released a single, Where The Hell Are My Friends?, just four days earlier and every single person knows the words.

“That was mind blowing and the best feeling in the world because a lot of the time we open for an act the audience might only know one song.”

Lany are putting the work in even when no one seems to care, and their progression in twelve months certainly makes them a band to watch out for when this affable trio return to play on the Leeds/Reading bill this summer.

All words by Paul Clarke. More of Paul’s writing for Louder Than War can be found at his author’s archive