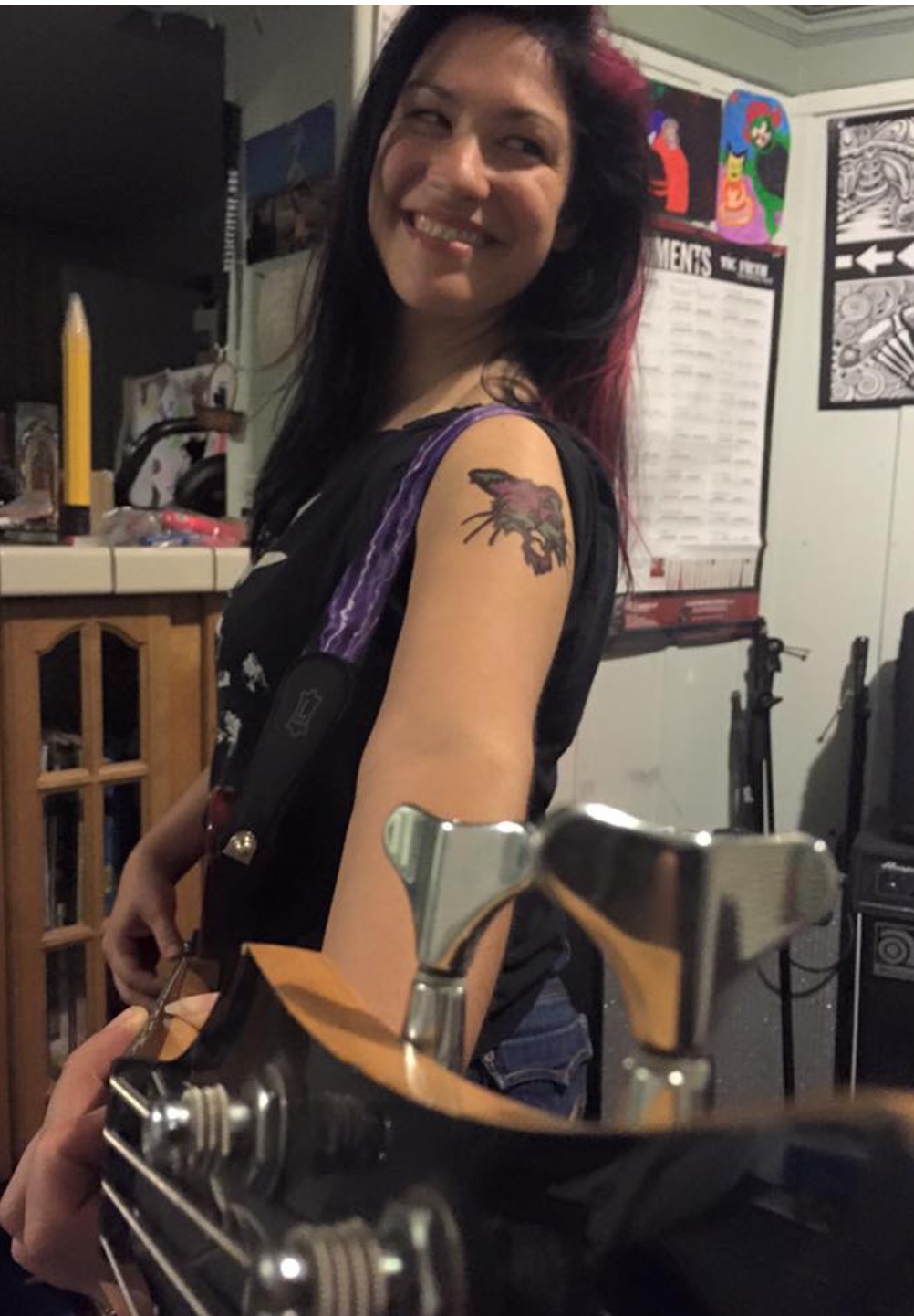 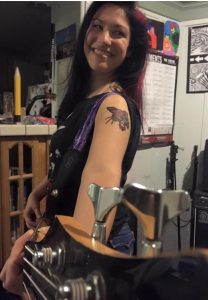 The warm and friendly, whimsically animated bassist of the cool and radical Pysch band Revolushn, is a full time musician, an award winning composer,  and a published poet. Aside from playing bass and singing in Revolushn she also is front woman for The Wyatt Act, and plays bass in Doctor Striker. Hosting Open Mics for many years, “Q” has celebrated and performed with comedians, musicians, and actors. It was during one of these Open Mic sessions that she met “No”, guitarist, vocalist, songwriter and founder of Revolushn.

Guinevere Q, shared some funny stories, crazy experiences, and fun times regarding the San Francisco Bay area where she calls home, and her musical and Open Mic encounters.

Louder Than War: What is your role in Revolushn?

I play bass and do vocals.

Do you write the music as well?

Not really I write in my other project. My band is “The Wyatt Act”. It’s super fun. I play bass and do vocals in other projects as well. So No and I met at an Open Mic, I don’t know if he told you that?

He did but I’d love to hear your version of that story.

I love when a friend tells me a story, and then another friend tells me the same story, and it’s a little different. I’ve hosted open mics for over a decade now. I used to host the Heartland Café in Chicago when I lived there. That was the first one I hosted. We had some people that actually became famous, like Hannibal Buress. He’s a famous comedian and writer, he writes “Broad City”. He started out at that open mic, I used to introduce him when I was 19. I don’t know if you have seen that show but it’s pretty hilarious. It’s one of my favorites, and not just because I know the guy who wrote it. It’s actually genuinely funny. When I moved to San Francisco I connected with DJ Fingersnaps Lamont and my friend Warren Longmire, an amazing poet. We hosted a show at Reading Studios on Market Street. Then the rent went up and he just couldn’t afford the lease anymore. So then we went to “Brainwash”, which is a laundromat, a bar, and a café. It was where Patty Hearst was brainwashed by the Symbionese Liberation Army. It used to be a warehouse and then they turned it in to a laundromat with food and drinks and a stage.

What a cool and different idea.

Isn’t that great? Patty Hearst is a trip, she married her bodyguard, so weird. So we hosted an open mic there. The sound system they have now is from me and Jason, we donated it. Then we went to “Viracocha”, A really, really cool place I miss it dearly. It used to be an old Santeria shop. It had an amazing performance venue downstairs, like a speakeasy, with a hidden door. You had to know someone that knew someone. It was illegal, and it was a fire hazard with only one exit. Same thing the rent went up and the owner couldn’t afford the lease anymore.  Then Jason and I moved over to “Neck of the Woods”. I love that venue the owner is a musician, and he’s a friend of mine, a really cool guy. We hosted that open mic for a couple of years, and that’s how we met No. He came to the open mic and said, ” I’m in a band called Revolushn, and my wife is Russian”. I said, “Ok, nice to meet you”. He said that all in one sentence to me. I didn’t understand the connection at first. Then later he explained to me that the spelling off Revolushn was the Russian spelling of it, or as a Russian person which translated into English. That was why he told me his wife was Russian.

I never knew that.

His wife is fascinating. She was a doctor in the red army. Have you seen her paintings?

No I haven’t yet.

We played at an art show for Olga. To see them all hanging was really pretty cool. They kind of told a story the way that she hung them. Walking around the building was like going on a yellow brick road journey. So we jammed with No, on the open mic scene, and then I think he came to see my band play a few times too. I think the first time he saw me I was playing with Doctor Striker. It was a Halloween show at Hotel Utah. The other band we played with was Introflirt, tragically they died a couple of years later. They were playing at this underground party in Oakland and it caught fire. It was awful. There’s a lot of illegal shit out here, like nobody can afford the rent so a lot of stuff isn’t up to code. My trumpet player sleeps in a shipping container. I have a friend who pays rent to sleep on the windowsill. It’s like that kind of situation. He’s a functional alcoholic so he just falls asleep. It works out for him.

You have the greatest stories. So all of you in the band are married to each other.

Jason and I are married and No and Olga are married. Jason and I both grew up in musical theater. We are really into theatrics, storytelling and characters and stuff like that. We’ve always loved that.

I can tell that all of you guys have fun in the band.

You mentioned that you were meeting some friends to discuss an electronic press kit. How do you feel about doing promotions in an indie band world?

It’s the Wild West. Which is like exciting and daunting at the same time. It kind of empowers me in someways because it’s like, “We are the music scene, we are the music community”. We decide what the rules are, and there are no rules. We have the freedom now. I can listen to some teenager in New Delhi’s playlist at four in the morning if I want. That’s incredible to me. It’s amazing, but also at the same time as a musician, I’m a full-time musician, you are suddenly expected to be a marketing expert or something? I’m not going to tell people what to do.

But you can present yourself in any way that you want, anyway that you think people will think you are out rages.

That’s what John Mayer used to do. He used to make fake teenage girl profiles in chat rooms when they were popular. Then he would post as one of those fake teenage girls and say, “Oh my God I love John Mayer”. Then he would log into another one and do the same. He was a genius in marketing. He comes and drops in at the Hotel Utah sometimes for open mic. He doesn’t say anything, he just sits down and plays. There’s a wonderful scene out here!