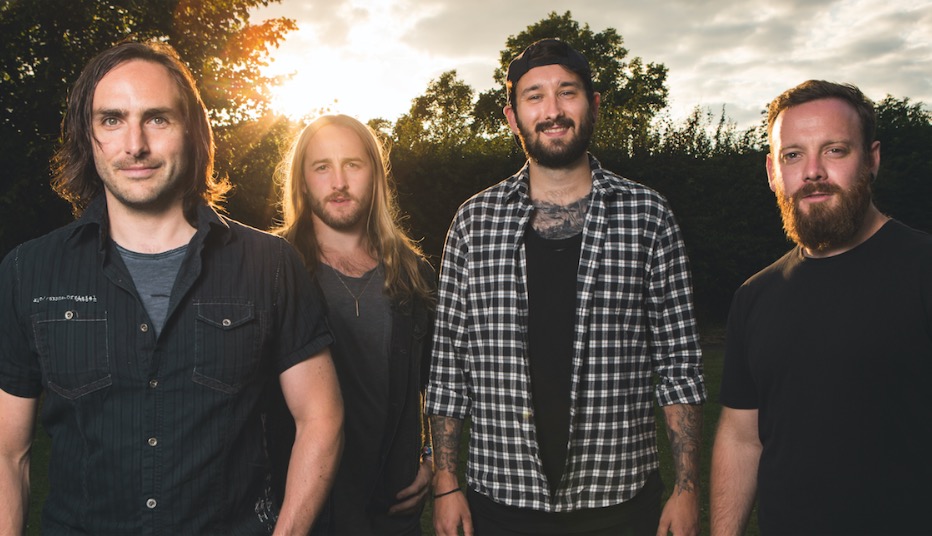 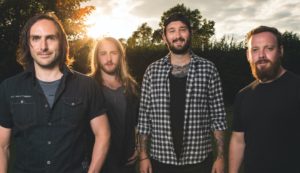 With a show at the Glastonbury via the BBC under their belts and a brand new single just released called, I Want More, this high powered modern rock band Go Primitive is continuously touring the UK non stop. Currently getting ready to release a second new single in November, although the band already has two EPs, they are getting ready to launch their debut album entitled, “Choices”.

Members include Tomm E. Williams on vocals and guitar, Adam White playing guitar, Dan Teale on the drums and newest member Andy Dove on bass. The band explains in reference to their new single, “I Want More” is a song about the determination, fight, and passion we inject into our band and for the desire to make our voices heard”

Louder Than War caught the band while waiting to go on stage and spoke to them about their music, and their future endeavors ….

Louder Than War: Tell me a little about the band’s history, how you all came together.

Dan: We’d all been playing in bands for years. We kind of just found each other on the circuit where our previous bands split up and then members left and we got members in. Me and Adam have been playing together for about nine years. Then we went through several lines of changes. Then we went and saw Tomm. He was basically starting out with singing, because he had been playing guitar.

Tomm: Yeah, I’ve also been playing in bands since I left school basically. I was just the guitarist and then later on I decided I was going to sing as well. Since all the singers in previous bands have let me down, so I thought I’m going to do it, and then I joined the band about five years ago now. It’s kind of been this lineup for five years except Andy the bass player who only joined a year ago. When Andy joined that’s when we really became the band we are at the moment in its proper form.

Where are you guys based out of?

Dan: We’re based in the Midlands near Rugby which is near Coventry.

What makes your band different and one step above all the rest? What is your formula?

Dan: We all have a lot of influences and they range from tech metal to classic rock and modern rock. Our formula is kind of like blending modern rock with melodies and bringing in the riffs, the groove. But, also blending in the classic rock style with guitar solos.

Tomm: I kind of like to think we’re like modern rock with guitar solos and classic rock influences.

Tomm: We do it collectively. Often I’ll come up with a solo idea and then take it to the band, and then they’ll tear it apart and it will become a different song together.

You have two EP’s out, correct?

Tomm: Well we’ve got one EP out now because we discontinued the first EP.

I heard that you guys are a very ambitious band.

Dan: That is very true. Our aim is to take over the world.

Adam: We will play anywhere and everywhere and do anything to make this our career, and be successful with it, and get as many people to hear our music as possible. We are very ambitious.

Adam: I think it’s rreally justa thank you so far because the response we’ve had to everything we’ve put out was just incredible. There’s a program on the radio, on the BBC called, “BBC Introducing” which is for all new bands. With everyone’s help tweeting to them we caught their attention. Through that we got picked for Glastonbury last year. That was huge, amazing!.

Were you on the Pyramid stage?

Tomm: We did see it! We were on the BBC stage. It’s still very prestigious and we are really still grateful to have been there.

Dan: We were just clawing our way through the mud to get to the Pyramid stage, year by year.

Are there any future projects line up!

Tomm: We made an album recently. So we’re just starting the process now of releasing tracks from the album. Over the next few months were gonna be releasing some singles. We released one that just came out a couple of days ago called “I Want More”.

Adam: And there will be a video coming out for that.

Andy: I’m the quiet one.

Where do you see yourselves in five years?

Tomm: In five years it would be nice to be doing much bigger shows to a bigger audience and gearing up to release a second album. That would be nice.

In the next couple of months where can someone  find you?

Adam: We’re doing the single launch after the video comes out. We’re going to be doing a five day tour around the UK and we will be playing in London, Leeds, Bath, Nottingham, and Leamington Spa which we are using as our hometown venue. That’s the tour that we’ve got planned at the moment.

Dan: That’s with two other bands called, Scout Killers and Seasons, which are very good bands as well. We are really looking forward to it.

Anything else to add?

Adam: Because we are releasing the album next year we will pretty much be playing shows solidly as much as we possibly can until then. So it would be great if anyone wants to come and say hi between now and then.