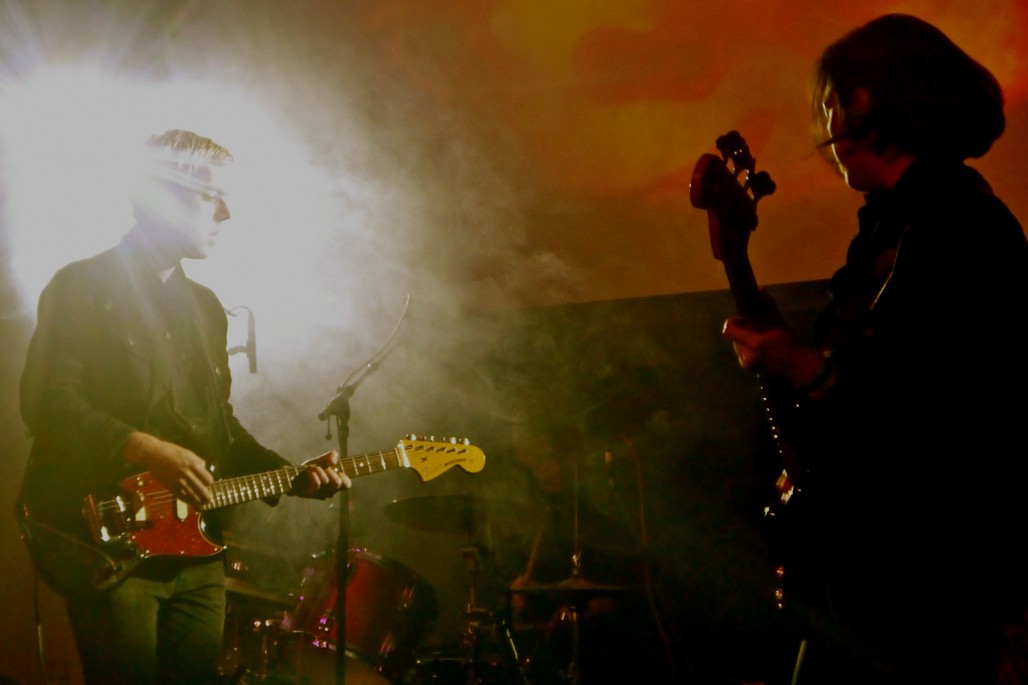 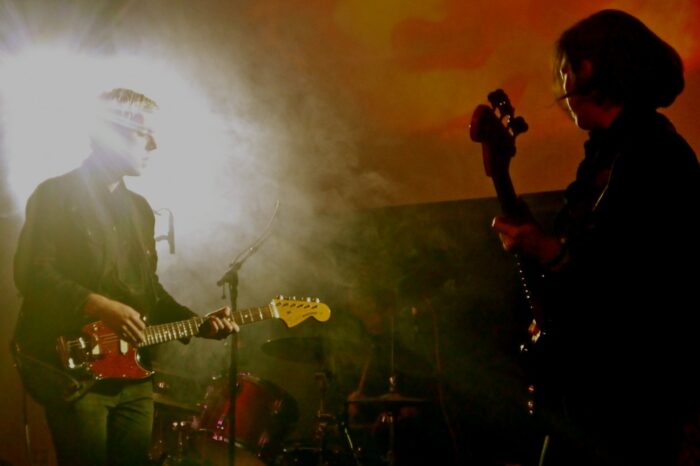 Ahead of the release of their third album, Arms Around A Vision, Louder Than War’s Will Dix probes Girls Names on self-production, throwaway promo videos and whether guitar music really is just “a playground for the rich middle classes.”

But before we jump in with the interview check out the video for one of the more immediately krautrock tracks on their new album, which drops officially today via Tough Love. For the track A Hunger Artist the video is a brilliant riff on classic British music TV, featuring one of the most awkward interviews you’ll ever see. One we could almost describe as Kafkaesque in fact…

Louder Than War: What was the reasoning behind self-producing the new album?

Cathal Cully: It always comes down to the fact that it’s cheaper. We did approach one producer, and got a knock-back, so we thought let’s just do it ourselves. And the studio we use at home is great anyway.

Are there any producers you’d want to work with if you could?

Gib Cassidy: I’d never rule it out for the future, I just think at this time it was right for us to do it ourselves.

Cathal: It’s the first time we got someone else to mix it though. We got this guy called Dan Rejmer, and that made a big difference to it.

Were there any producers who influenced your approach? I got a kind of Martin Hannett vibe coming through.

Gib: I guess Martin Hannett is like an obvious one, there’s no doubt that [his influence] is on there, but there’s also things like the snare drum having two mics on it, actually there were loads of mics on everything. After we’d recorded the initial tracks, we found ourselves with a bit more time, and Cathal, for example, recorded the guitar in a stairwell at one point. There’s a lot of analogue synths on there as well, and other instruments like violin, saxophone.

Cathal: It was more time than we’ve ever had in a studio to mess around with, and two songs at least were written in the studio.

Were those the two interlude tracks?

Cathal: No no, like there’s a song called Malaga, and the last track on the album I Was You, they were written pretty much on the spot.

Compared to The New Life, the songs sound more like they were intended for an album this time. Was that something you were conscious of when writing them?

Cathal: Not ‘conscious’, but I guess there’s a bit more of a cohesiveness to it, and it’s a bit more inclusive with everybody chipping in their ideas.

Gib: I know it’s been said a million times but it’s also about using the studio as an instrument itself, and I think that comes across more than anything else.

You’ve said before, Cathal, that “most guitar music now is just a playground for the rich middle classes.” What brought you to that conclusion?

Cathal: The first time I came to play in London, about five years ago. There aren’t many people who understand, not even the amount of money that’s invested, but the amount of energy and time. When you’re literally counting the pennies to pay the rent and stuff, thinking “I could just do with some sort of normality in my life.” I mean, I just turned thirty, and I think like that was a bit of a milestone obviously, but just… I don’t know where I’m going with this.

Cathal: Sorry, I think that’s where, like, there’s a lot more frustration in the music now. But I like feeding off that. It is that kind of clichéd thing where you’re like starving or striving for something, it is gonna be better.

Do you think that you couldn’t make the music that you do without having that kind of struggle?

Cathal: I do think there’s not too many working class bands that are educated and intelligent who are making music now. I mean, the arts in general is more of a middle class thing, because people need the money behind them to build their craft and stuff, but we haven’t had that so it’s been a bit of a slog like.

Gib: The whole concept of releasing albums is different than what it was, y’know. One of my friends was asking me “has the album leaked yet?” and I said, “well no, we’re leaking it on the second.”

Do you get a bit fed up with the London-centric nature of the music industry?

Cathal: I don’t know, we kind of just live in our own world as well. I don’t really keep too much up do date with what’s happening anymore. I stepped out of it like a couple of years ago and it’s been hard to get back in.

Gib: Everything comes just so quick and fast nowadays it’s pretty impossible for people to keep up to date. Like if you refresh your Twitter feed, there’s twenty new bands that are amazing and you have to hear, but more often than not you don’t have to hear them.

Cathal: I know there’s a rush of albums coming out this autumn that are decent but this year has been poor for records I think, compared to last year. Somebody asked me earlier “what have you been listening to?” and I can’t really think of much like.

Gib: I was writing down a few of the records that I like at the moment, or have just been released, and they’re practically all electronic music.

Cathal: I think that’s what we all listen to more, electronic music, than contemporary guitar music.

That comes through on the album, like some songs have two synthesisers going at once. What sort of electronic music influenced that?

Cathal: I’d say a lot of proto techno and proto like… Berlin era Eno, Iggy Pop, David Bowie and all that gang.

Gib: There’s even the influence of like a French cold-wave kind of thing. Even a lot of electronic music I listen to at the minute is also influenced by a lot of proto electronic music, even industrial music, there’s a big industrial thing on this album as well. There’s literally the sounds of hammers hitting cymbals, broken cymbals.

Cathal: There’s so many and so little limitations any more in this kind of work… I find sometimes I get bored of playing guitar as well.

What was the motivation behind doing a kind of Other Side of Midnight type parody for the video for A Hunger Artist (embedded at the top of this interview)?

Gib: We had talked about like Fall videos where it was just the band in a white room or y’know… But it kind of became funny organically, and it’s very obviously meant to be that way as well. But there’s a lot of smoke and mirrors these days as well, a lot of these music videos they look like adverts to me. We were talking about this on the plane over, like you forget about them in two seconds…

Phil: I guess it shows that we’ve got a bit of a sense of humour as well.

Yeah, it does seem to lighten the tone of what is essentially quite a dark album, in terms of where it came from, being recorded in the middle of winter and the like.

Gib: Well there’s generally speaking only one season where we live.

Same here. We didn’t have a summer this year.

Phil: Well we haven’t had a summer for like ten years.

The only thing about that video I thought was maybe running a risk was that you have repeatedly had to resist being labelled ‘twee-pop’ by lazy journos, including one who was working for Ray Ban, and yet there you were directly referencing that very era of guitar music. Was that something you gave any thought?

Phil: Not at all, like the whole twee thing is so far behind us these days I think. I mean even at the time of that interview we thought it was laughable, as you can tell. What was it he said? “Twee nonsense”?

Yeah, implying it had something to do with you…

Gib: It’s out in October, on Tough Love, and we’re gonna be touring quite extensively, for hopefully the next two years.

Until there’s another album basically.

Gib: Yeah. We’ll see how this one gets on first. But yeah, we’re all happy with it.

Cathal: Yeah this is the album I’m most happy with, definitely. It’s like it’s our own more than any of them. I don’t think there’s gonna be any other bands or albums around this year that sounds like that. It kind of stands out. It might be similar to what’s going on in other bands but I dunno, I think just ‘cause we locked ourselves away we’ve done our own thing. I think it’ll like jut out, for good or bad y’know. But at least it’s not like all the other shit.

Arms Around A Vision is out on Tough Love October 2nd. More from Girls Names can be found on their Facebook and they tweet as: @Girl_Names.

All words and photo by Will Dix. More writing by Will on Louder Than War can be found at his author’s archive.