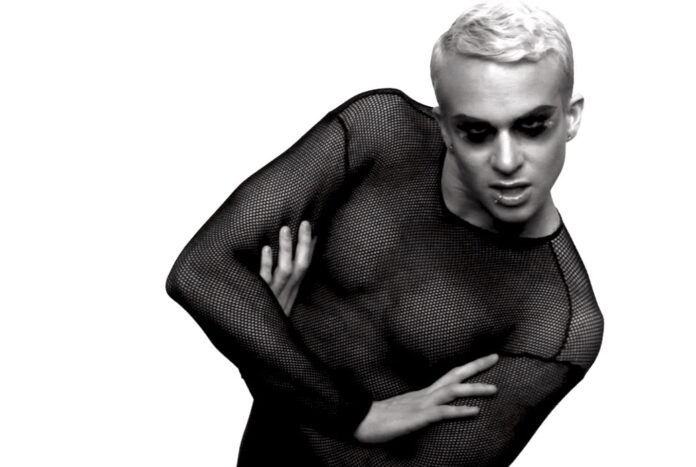 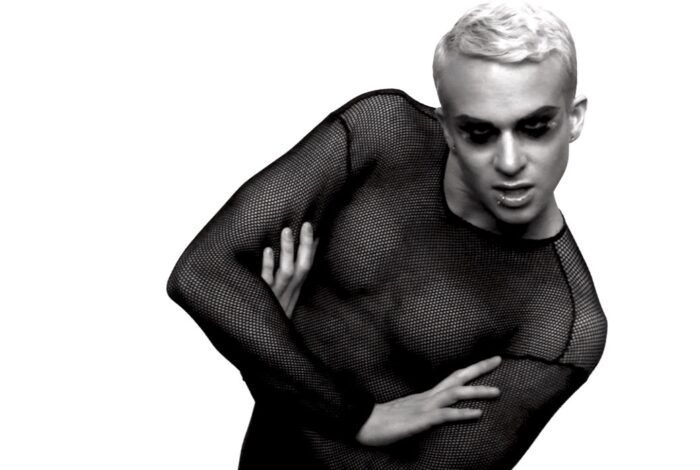 Dangerously exhilarating and breathtakingly astonishing, GAREK, the dramatically flashy new to the scene, New York based glam, pop, electronic recording artist has recently released his debut single “Save The Queen”.

“Save The Queen”, a nearly accidental explosion, has already received international attention. It’s monochromatic, captivating video, has captured the very essence of “Glam”, in the most provocative, degenerate style wonderfully possible. The song is both intriguing and haunting, with a powerful sensibility revealing the Queen’s fate in the game of Chess, although GAREK , unsurprisingly declares himself as the “Queen”.

Influenced by Nine Inch Nails and Marilyn Manson, GAREK used the” Electro-Industrial” genre and has created a majesty of sound destined to take over the musical world as we know it. GAREK has already taken this song to the UK, during fashion week in London, where models appeared on the runway for the Champagne inspired jeweler, “Wearing Memories” dressed in black morph suits and cat walked to “Save The Queen”, while the artist himself provided the sold out crowd with the spectacular grand finale.

Louder Than War spoke in length with GAREK about his influences, his inspirations, and his future in the music industry. Please bear in mind that this artist is a force to be reckoned with as he has already been saluted by London’s EQ Music as “a deity of Industrial Electro mastery”

That song “Save The Queen” is just awesome!

Thank you. I’m glad you like it. It’s kind of a homage to the 90s. Industrial Rock…I’m a 90’s kid. That’s where all my inspiration comes from.

I started writing songs when I was listening to “No Doubt”. “No Doubt”, “Tragic Kingdom” was the first record that I bought. I saved up all my allowance and bought that record for myself. There was just something about her songwriting that was very playful that I was kind of drawn to, but then when I was about 13 or 14 I started gravitating more to Marilyn Manson. He was a huge influence, one of my heroes. Also Alanis Morissette. When I tell people that, they kind of react strangely. Some of them get it and some of them don’t, cause it seems so very different. Musically they are very different, but I was attracted to their voices. They both have very unique voices, but also they were using their voice to say something that was very personal. She was very vulnerable, and at times angry. That was something that I had never heard before. He was very angry, which was why I was attracted to his stuff. It was a little sarcastic, but was more aggressive. That was something that when I was younger and even a teenager, that was a hard thing for me to do. I could not express, my anger. Instead of being angry I would get really quiet. He was a voice that gave my anger an outlet.

What made you so angry?

I’m from a small town in Wisconsin with like 400 people. I didn’t fit in. I was the kid that liked music and art. Where I was from it was cool to be dumb. I knew there was a world outside of my town, but I never experienced it. I was hopeful about this world, but I was also very angry that I was stuck where I was stuck. I wasn’t out yet, but I listened to people tell me I was gay, and that gay was bad. I started to believe that being gay was wrong and bad and I would try to change it. Then I would get mad at myself because I couldn’t change it. Studying music was just me trying to be honest with myself and therefore the world. That’s where the material that I am most proud of comes from.

How long have you been living in New York?

Five very long years. I don’t really like it here. Like I said before I’m a country boy.

What made you decide to come to New York then?

I always heard how challenging it was. I think it was the right decision but it’s been the hardest time in my whole life. You see all these people who try it in the entertainment business, eventually drop out of the race. They either go home or they go back to school, because it’s so fucking hard to do. One of the reasons that I’m still doing it is because I’m so stubborn. I’m so pigheaded about things, so that people tell me I can’t do it, even if I didn’t want to do it in the first place, then I feel like I have to. I have to prove them wrong, and prove to myself that I could.

So now you have what I think will be a major hit song.

Well “Save The Queen” happened by accident. One of the struggles of being a solo artist is finding the people that understand your sound and you’re esthetic. When I moved to New York within 3 months, I got an internship in a production house. The kind of music that they made was for movies, like Disney movies or whatever was in theaters that they needed music for. So I would watch the produces work, there were about 16 of them producing all kinds of music for movies. I was an intern taking out garbage, cleaning toilets and stuff, so I was around. I made sure I was around the best. I had no background in music production. or music theory, I was just a kid liked to write songs. I sang songs because I wrote them and I didn’t want anyone else to sing them. So I had no idea what I was doing and I got ripped apart by everyone that I was working with. I spent about six months sitting on a couch behind them and watching them work, not saying anything, just trying to absorb like a sponge. “Save The Queen” came through as an assignment. It was for a TV show, I forget which one. The producers for the show wanted a contemporary industrial pop, like “Nine Inch Nails”. The producers knew that I liked that kind of music. As a joke they gave it to me. I was an intern. So I wrote the chorus for it, and then the producer that I was interning with, she and I wrote the rest of the song. Then we played it for every body, and at first they didn’t say anything. When they did say something, they said it was fucking good. They said they were really surprised and that they wanted to do more songs with me. They just kind of threw it at me, and they didn’t think anything was going to happen. It was an assignment that no one wanted to do. I did the video with a fashion photographer who had never done a video before. He was a friend of the producer I was working with and he always wanted to do a video. I did the video with him, and everyone in the video was a friend of mine. It’s all the people that I worked with or slept with.

Are you planning a tour in the near future?

What I want to do more than anything is to play music. Last year I got some gigs in Spain and in Copenhagen, and they played “Save The Queen” at London fashion week. Models were walking down the runway to my song, and I got to walk the runway. It was fucking terrifying because I’m not a model. It was fun. It’s got me some great opportunities to do some really cool things. I don’t know what that would look like though, whether we need a club tour, or tour with some of the bands. I see myself as an alternative artist.

So you have gotten some radio play?

I’m currently working with Ed Steinberg who did Madonna’s first video back in the 80s. He saw me doing an acoustic performance, which I never do, and took an interest in me. He has helped me get the song out to the radios, in the last month or so. I put it out independently a while ago, but now in the last month or so there is more structure to it. He knows what he is doing, and I do not.

Do you have a follow up project, perhaps a song that you’re going to release after this?

Yes, I have an EP out. I have five videos also. If you go on my website I think you’ll see a more alternative style than just the gay club scene.

What kind of message are you striving to get out there in “Save The Queen”?

The song itself is about a chess game. I just wanted to write a song about chess, because chess is an interesting game to me. It’s black and white, you either succeed or you don’t. It’s how you align yourself with powerful people, or what strategy you use. When I was an intern that was my frame of mind. Who do I align myself with, who do I pledge my allegiance to, who do I work with, who is going to waste my time, and who do I have to be nice to? I felt like the chess metaphor was an appropriate song for that time in my life.

You can listen to God Save The Queen by clicking here.