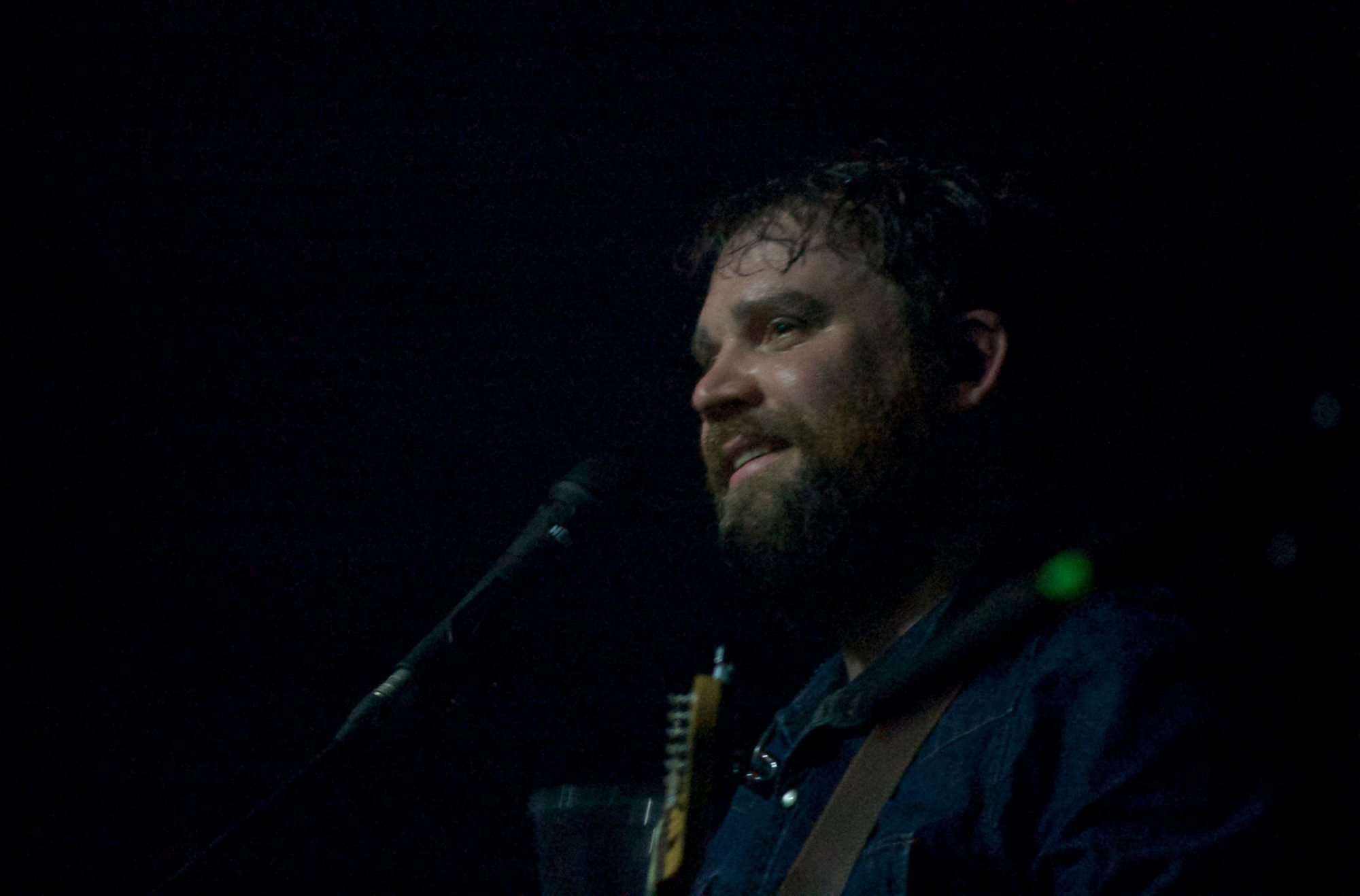 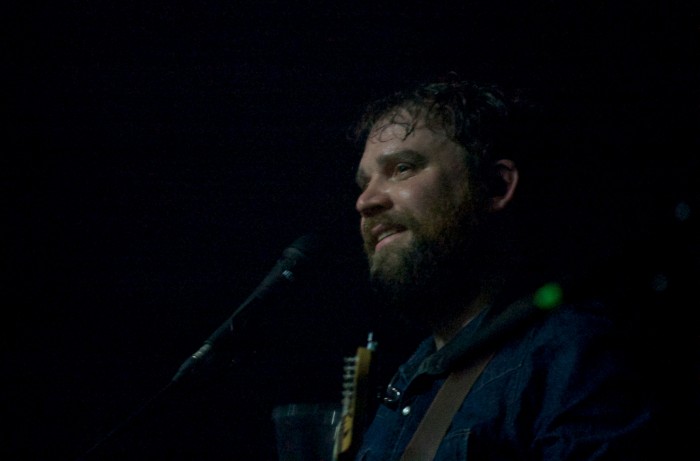 Frightened Rabbit have just unleashed their fifth and arguably their finest album, Painting Of A Panic Attack.  As the band prepared to perform their new songs together live for the very first time, at a recent show in Glasgow, Susan Le May spoke to frontman Scott Hutchison about growing older, isolation in LA and re-energising the group.

“Los Angeles, Be Kind”, Scott Hutchison’s heartfelt plea on his 2014 solo project Owl John, was written as he prepared to move to the city from Scotland to follow his heart. Despite his apparent apprehension, it seemed our antihero was finally happy, with major label success following a decade’s solid graft by his band Frightened Rabbit, and love within his grasp. But what would this mean for the band, with continents and time zones dividing them, and what would it mean for his writing – would the misery and fuck-ups that once consoled us be replaced by the sunshine and chirpy love songs?

The band needed a break – they were tour-exhausted and rifts were festering. “I think the band had come to a point we’d spent so much time in each other’s pockets that it was a good opportunity to refresh the palette,” Hutchison suggests. Guitarist Gordon Skene got the boot and Scott fled through the departure gates fueled by excitement for the future.

Painting Of A Panic Attack, Frightened Rabbit’s fifth album proper, was born of this shift stateside, a leap into the unknown and towards adventure that didn’t quite go to plan. It is an incredible body of work, the group’s most cohesive record yet despite the geographical distance that separated them during its creation. It is subtle but bold, beautiful as well as bleak, restrained yet somehow heart-swellingly majestic. These are stories of love and self-reflection, the suffocation and isolation of circumstance that can strip the rose-tinted romance from expectation.

“You can’t just lose your Scottishness by moving to Los Angeles,” Hutchison half-jokes. “I did go there to try and be happy, whether that happened or not I suppose is evident on the album. I was happy a lot of the time but I found it quite an isolating, odd place to live and very against the kind of culture and community that I had grown up with in Glasgow and Edinburgh. It was so alien to me.” The simple but dangerous pleasure of strolling down the road and bumping into friends and going for a pint – these were the things he missed, though he admits to making up for lost time in that regard since being back on home turf. “You kind of feel like the younger version of yourself thought that by this age you’d be a fully formed adult and you’d have your shit together, and then you start to realise, Nah not quite. I’m not as grown up as I thought.”

But this record oozes a maturity not yet fully evidenced by the band before, perhaps mirroring the stages they’ve now reached in their lives. “[Frightened Rabbit] has been the centre point of all our lives for this time, but then when you get to this age that focus starts to shift a little bit,” he begins. “You start to want to extend your life beyond the band because you can start to be completely defined by this one thing. I think we all want to do that,” he says, suggesting this was at least in part some of the reason for his relocation. “Having spent ten years sacrificing the rest of your life for one thing and then realising you can’t really do that anymore. You can do that in your 20s but I think now is the time to achieve a balance and that’s maybe what we’re looking for more these days.”

Today the band is preparing to debut a clutch of the new songs to a dedicated audience in their adopted hometown of Glasgow, under the pseudonym ‘Footshooters’. It’s the first time they’ve performed these tunes, the first gig in the city since their monumental Pedestrian Verse tour of 2013, and the first since adding long-time contributor Simon Liddell to the official line-up. They are in the very early stages of once again getting match fit. 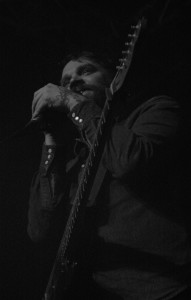 “For the first couple of days it sounds like absolute dog shit and then it really comes together and you start remembering that this is my job and we have kind of gotten decent at it in the past few years,” Hutchison says. Slowly he’s accepting there’s an appetite for more material from Frabbit, and easing back into his role. “I get quite paranoid about people losing interest,” he offers. “It could all feel very 2013. It’s been heartening to see that that’s possibly not the case and it’s more just a sense of anticipation from a lot of people, certainly our solid audience are pleased that we’re back, and so am I – we all are.”

The “totally natural” addition of Liddell in place of Skene is something Hutchison is extremely positive about, suggesting he was the spark that lit up the band once more. “Simon’s massive enthusiasm for working in the band has actually become so infectious,” Hutchison beams. “Especially at the stage we’re at where perhaps the rest of us after that [2013] tour might have been getting tired thinking ‘What are we doing this for? Do we need another Frightened Rabbit album?’ and Simon was like ‘Yeah, we do!’ He’s totally [musically] gifted but his massive enthusiasm for working with us as part of the band was infectious and it really helped to reignite our passion for the whole thing as well.”

Another key element to this record, and equally important in securing the group’s future, was Painting‘s producer, The National’s Aaron Dessner, who Hutchison says was like an extra member of the band during the album’s creation. “Purposely we had much less of a game plan going into it and Aaron really pulled the sound together,” he admits. “There is an arc to the album that I think might not have been achieved had we just been putting it together on our own, it might have been a selection of songs as opposed to an album. He’s got his fingerprint all over it, which I’m very happy about, being an enormous fan of everything he’s done.”

Dessner is a perfectionist, but the band was, for the most part, happy for his intervention. “I don’t think he half-arses anything, to the point where actually there could be an argument for him being too involved, but he doesn’t really give himself a choice in the matter. He’s a phenomenal musician so if there was something we thought he could do better then he was perfectly welcome to do so. There’s not a lot of people in the world that we would allow to do that but he’s one of them and he was in there,” he says. “He was in the process from way early on right up to mastering which he attended, he’s a really hands on guy, almost frustratingly sometimes because it was like ‘Whose record is this?’ He doesn’t have a choice and that’s an amazing thing to have his support as well. Decisions that we might have let go and said, ‘Oh that sounds fine’, he would say, ‘It doesn’t sound fine, we’re going to get this sorted’. That elongated the process a little bit but ultimately to the benefit of the album. I think he’s done some perfect things but to his own mind, it could always be better.”

But despite the newfound subtlety, the record is still packed with the soaring Frightened Rabbit moments that make their music so appealing, it’s just been pulled back and contained. “I think [Aaron] used the phrasing that [our previous albums] were quite frantic and eager to please in a way and was like ‘You don’t need to do that anymore’. He tried to keep it simple,” Hutchison recalls. “The last album was almost like the conclusion of a sound that we had been trying to get towards for the albums previously, trying and maybe not quite nailing it and then [Pedestrian Verse] came about and it was like ‘I think that’s sort of done now’ and you reach that end point.” He continues: “Then making the [Owl John] album with Andy [Monaghan] and Simon changed the perspective of the three of us of what a song should be, and does every song need that peak moment or does it need to build towards this crescendo, and I think that’s something Aaron pulled us away from. He was like, ‘You don’t have to grasp for attention’. Even something as simple as reducing the tempo of a song ever so slightly so it doesn’t feel so frantic, you can let the song breathe a lot more under those circumstances. He had a big hand in that but we were kind of ready for it anyway, to stay away from the tropes that we’d been using for a while.”

Frightened Rabbit’s future now seems secure. What chapters will unfold in its storyteller’s life remain unknown, but the band is at least refreshed and looking forward. Scott has left LA, having headed across to the other side of the country with his life packed into a car. He may have finally found his panacea in Hudson, a small family-friendly city two hours from New York City – a place where he can finally breathe. “It has all the things your classic hipster might require,” he quips. “It does have those things I want in my life. I have to admit that I may just be a hipster! The difference is astounding.”

Hutchison has no immediate plans for more solo stuff, certainly not as Owl John, but suggests when the time comes to relax Frightened Rabbit again, they’d be open to doing their own thing. “I’m sure I’ll make an album essentially by myself again but that all came about because it was time to do something different, and when that time comes around again, then maybe Grant starts a band with… I don’t know…” James Graham from The Twilight Sad?, I offer. “I’d want to be in that band actually so hopefully, they’d invite me to do that!”

Whilst our protagonist may have ironed out the fault lines of his new life in the US, the remainder of the band have gained a permanent studio space in Glasgow, allowing a greater sense of freedom to the way the group works. “Now Andy is an absolute technical wizard and can completely take charge of creating our demos so it’s much more self-sufficient. These guys can work in Glasgow whether I’m there or not and that means that any spare time we might have, there’s always the opportunity to go and make new songs so I think that’s going to be really good. And it definitely shouldn’t be three years before the next one – maybe two!”

Words and pictures by Susan Le May. More work here or find her on Twitter at @alcoholiday_sue.