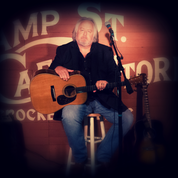 Although not the type of music I would normally listen to, I was miraculously amazed at Free Willy’s ability to sound like a full blown orchestra. I was also pleasantly surprised at frontman, W.B. Jones’ vocal clarity. By the time I had finished listening to the complete recording of this full length album, I was a fan forever.

The members of the band include W.B. Jones, lead vocalist and rhythm guitar, Jim Taylor, back-up vocals and bass, Spence Peppard, back-up vocals, lead guitar, drums, Kevin Carter, fiddle and mandolin, and Steve DeVries, banjo and harmonica. This band was uniquely formed by Jones in a very interesting way. Aside from that Jones had the vision and insight and invented what he calls the “Free Willy”, sound involving the lead instruments playing over the top of each other, as opposed to taking turns.

W.B. Jones has a dream involving a household word, a shelf full of awards, and a next album, already named and set to be recorded this fall….and I truly believe he will accomplish his dream because his songs are honest and come from the heart.

Louder than War: I just love your music, and I’ll admit it’s not the kind of music I would usually be attracted to, but somehow yours is different.

Thank you. What would you call my kind of music?

Maybe modern bluegrass, or alternative bluegrass. Maybe there should be a new genre label.

I just went to a weekend bluegrass festival. I hung out with some of the well-known bluegrass artists and listened. I had intended to it to be a bluegrass album when I started recording, but then I turned the banjo down and made it a rhythm instrument and mellowed everything out. So, I realized at the festival that we’re not a bluegrass band.

Well, I think it’s just happy music, that makes you feel good. It puts you in a good mood.

I appreciate your feedback, all of those songs make me happy too. That’s kind of the point. It’s easy to listen to. It has a little bit of a message but it doesn’t shove it down your throat.

Yes, drama-free. I was wondering, what kind of effort goes into writing your music? Musically it sounds really complicated, like a full-blown orchestra.

I can explain that. I’m not a career musician, I’m a career manager.i started playing music as a kid, but I’ve always been too busy. I’ve been a workaholic for many years. I would pull out my guitar from time to time, and maybe write a song, and play for friend or family. We came here to Crockett, because it had this little venue called, “Camp Street Cafe. It has a big statue of Lightnin’ Hopkins in front of it. There are International blues players that come through there, and it’s such a great venue. I became the greatest proponent of this venue, I sponsored it financially. They have an open mic jam every month, so I had been going to that. I went there one night. I had been standing in the back, and there were about 25 people playing their own instruments on top of each other. A girl that I know was up there leading the group with her Autoharp in the jam session. They ranged from ages 35 to 85, and it just sounded so good. It came to me right then, I decided I was going to find a studio and some good musicians in East Texas, take the songs that I’ve already written and write enough songs to finish an album, and recreate that sound. I had never heard it before, other than in the jam session. When we went into the studio, I laid down the rhythm track, and then I got the bass player and the drummer. Then I found these amazing virtuosos on fiddle and guitar, and I let them do their interpretation, let them just jam through it. Then I brought in the next guy and let him jam through it. Then we just kind of mixed them on top of each other. You couldn’t tell those musicians what we were doing because musicians are very structured. They are used to the way they have always done it. If I had told them that we were going to play his fiddle part on top of a guitar part, they probably wouldn’t have done it. They probably would’ve refused to participate in the project. So I had to let them do their ego thing, not knowing we were going to jack someone on top of them. That’s also going on while we’re singing. That’s what makes it unique. We’ve got a lot of noise going on in the background while we’re singing. It’s very busy, and that’s not something that you’re used to hearing. We went back in and kept producing and producing. I call it the “Free Willy sound”, and that album is our first attempt at it.

That’s a brilliant idea, especially the way you accomplished it.

Are you planning to tour, and if so, how would that happen?

I met with the guys in the band and interviewed them for the job. Part of the qualifications entailed, them to be amazing and to have a pedigree. They are all professional musicians and have played with other bands. They all make their living in music. I explained that I have written songs and that I would be writing more, and that they would be playing separately in the studio creatively and then we would mix it with the other guys. I revealed that I needed them to be committed to this project and that I planned to do another album later on. I asked that they come back so I could establish continuity as far as style and creativity. I wanted to obtain a chemistry together. The other goal was, I wanted to win some awards with this music. I decided to spend all of the money I had to until it was right. I wanted it to be an excellent product because that’s what I do in my business as well. I asked that they commit to me and that if we were to win some awards that they would be willing to come to the show, rehearse with me, and perform with me. That was all part of their interview process, and they all agreed. There is no tour right now, it’s my own label, it’s all about indie stuff. Once we develop a fan base and have two or three albums behind us, if interest continues to grow, then I would have no problem buying a bus…and off we’d go. Having fun to me is more important than making money. All of this has happened intuitively and metaphysically, and so will the rest of the story. I can’t predict the rest of the story, however, it will be right at the time, and it will be a lot of fun.

In your music you have a lot of the 70’s music influences I think.

I played live the other night, and walked the audience through the fact that ladies 65 and older date me, and that they associate me with 70’s music. Sure enough someone came up after the show and said, ” that’s what you remind me of, the 70’s”. I really liked the 70’s and all my influences were from the 70s. By the way, that song, ” Meant to Be”, was a song that I wrote for our wedding in 1983, so that’s how old that one is. We are still married, 34 years later. The 4th track, “Not Your Everyday Love Song”, some people think of that as weird because I am an older man who’s never loved anyone, however, I wrote that one when I was 16 years old, for my first love. That’s been sitting in a file for 40 years. The songs stretch out from the 70’s until a week before we recorded the album. When I told the producer the name of the album was “Remember the Alamo”, they asked where the song was to go with it. I said, “Well, I haven’t written it yet”. I just knew I wanted the album to be called that. I put a request out to the universe when I’m writing a song, and then I just wait for it. Sometimes it comes to me in the middle of the night, sometimes when I’m driving down the road. I’ll just grab my phone and start singing it. I asked for “Remember the Alamo” before I started the album, and nine months later it showed up.

Your songs are timeless. I’m wondering, what’s next for Free Willy?

I have a son who is a video producer and he works on everything except my stuff. My additional goal was for him to come to every recording session and get everything recorded, and then go back and edit it into a mini documentary. So, we’re going to do that on album two, as I finally got his attention. The name of album two is “Too Cool For the Room”.