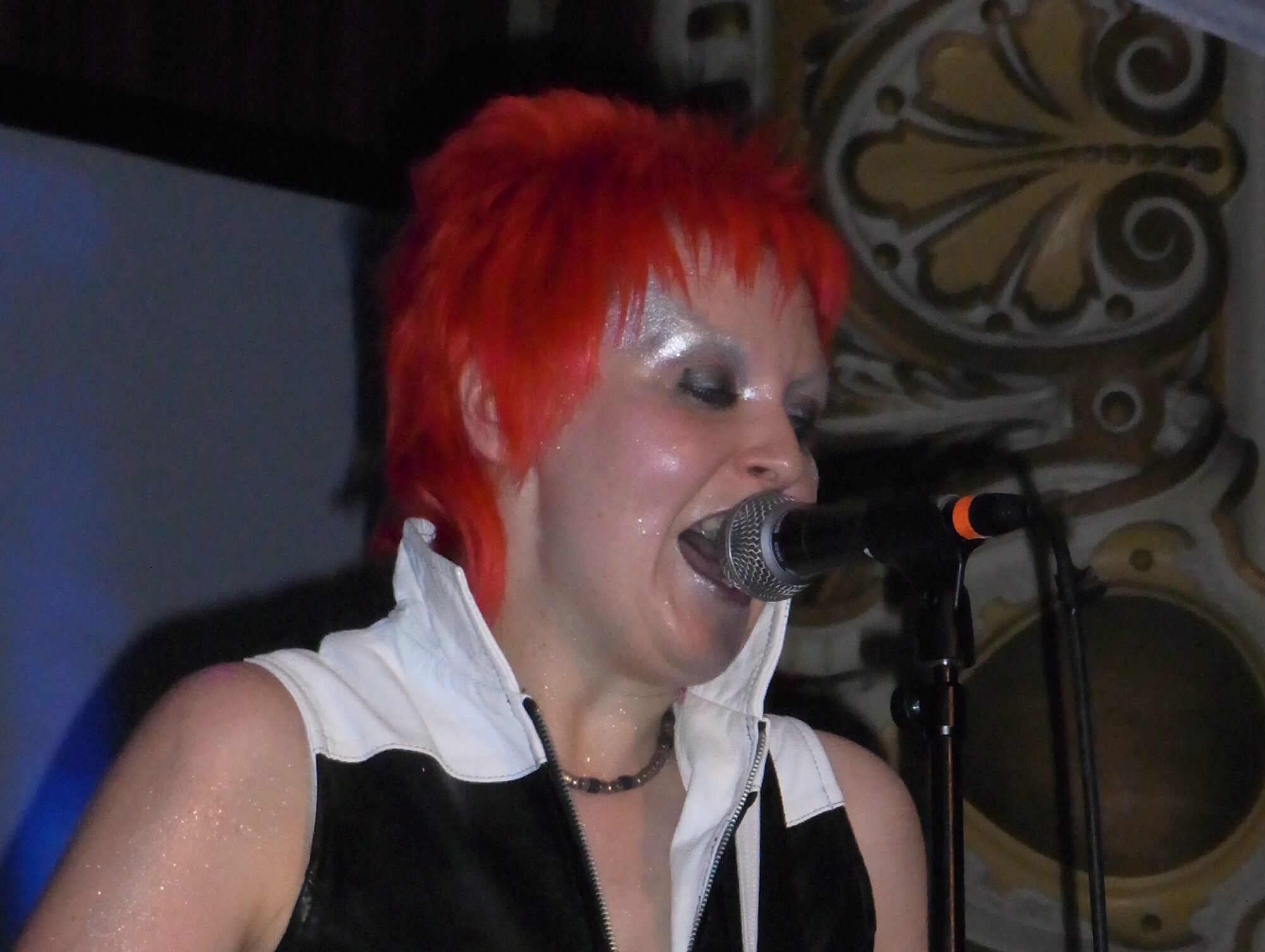 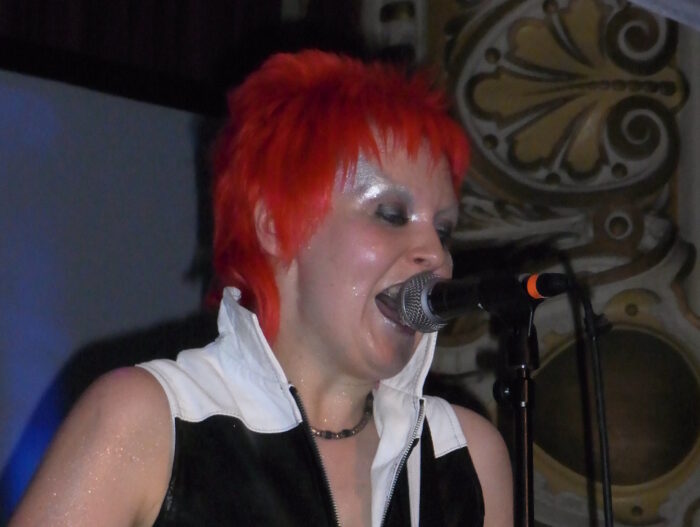 I’m still taking in the experience of my first Rebellion festival (review here). It was a surreal four days in Blackpool, and aside from the gigs themselves, one of my highlights was interviewing The Featherz. Having seen them support Jonny Cola And The A Grades last year, I knew that I had to keep an eye on them. Danie Cox, front woman and force of nature, steers the good ship of’ self-styled ‘Flock Rock’. While the band is her particular vision, she and drummer Dazzle Monroe have now been joined by Alice Atkinson on bass, making this feel like the definitive line up. They are a potent, charismatic stage presence, as I witnessed at 12.30pm on the Saturday; see my Rebellion review. So, without further ado (as Danie has a lot to say), here they are… 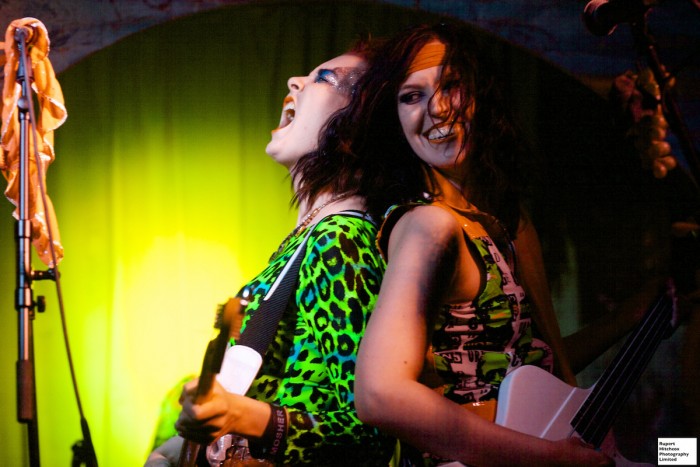 Louder Than War: At the Jonny Cola gig, I loved the strength of your songs and image. You rarely get both together. Then I read bout Danie’s relocation from Wales to London, her patronage by Boy George, and subsequently you found Alice. It’s been quite a journey.

Danie Cox: I wasn’t like a college student; I came to London with nothing. There was nothing  for me in Wales, and I’d always had a dream, to write my own songs, to express myself through my clothes and how I present myself. Luckily, I found that in The Feathers, in London, and the Jonny Cola support was our previous bassist’s last gig with us. Then Alice joined us.

Alice Atkinson: I used to be in a band in Brighton, I commuted from London, which wasn’t working out. Then, I saw their ad for a bassist; I was playing guitar, but felt I could adapt to bass easily enough. Danie sent me the songs, and I thought ‘Holy shit, I really want in!’, so I had to learn bass.

DC: She learnt the whole set in less than a week, we had a jam, and Alice has the same drive as us, and likes dressing up.  With this line up, it sounds so much better; we went in the studio with Kevin Armstrong, who worked with Bowie and he liked us and wanted to record us. 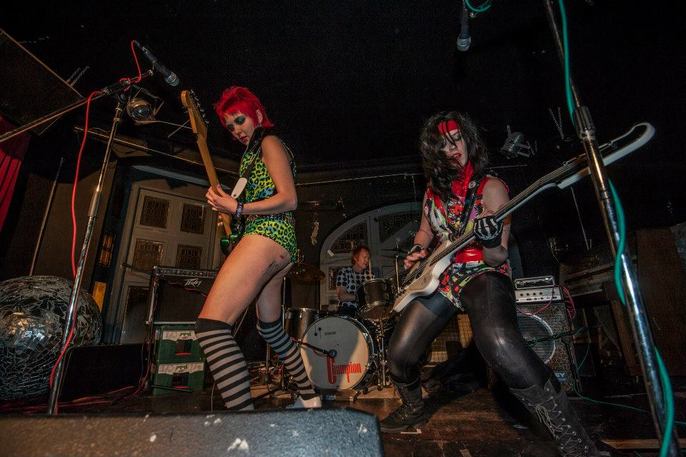 So, how did that come about?

DC: As our clothes are designed by Mark Charles, of ‘Charles Of London’, he knew Kevin. We aren’t signed, we have no management. We have nothing; Mark just likes us and believes in us. We do it all ourselves, and with support from our fans. It would be great to have a manager, if they were on the same page as us. We’d appreciate someone who understands us, and who would enable us to play gigs that actually have a P.A!

Alice and me are out the front, giving it our all, and there isn’t really a scene at the moment that entertains people. It needs a slap up the arse!

When I first saw you, I thought you were a band who just need a leg up to a wider audience, to make it take off.

DC: That’s what so many people say to us. We’ve been lucky with support; tomorrow is our first gig with Dazzle since he broke his elbow. We had David Donnelly, who plays with a lot of people and is a friend, so it felt o.k with him on drums.

Dazzle, that must have been easier for you, knowing him as a friend and supporter?

Dazzle Monroe: Yeah, I completely trusted him to do it as good as possible. And he’s very good.

DC: We will get there. We have complete self-belief. As you say, Alice is a breath of fresh air, she was born  for this!

AA: I hate it when everyone expects the front person to do it all; I’ll make sure I’m interesting to watch.

And I like that you all love to entertain, at a time when that seems to be a dirty word.

DM: If you’re going to a ‘show’, you expect to be entertained. It’s what we give.

DC: We keep playing when the amps blow up. I don’t believe in karma; you get what you put in. You’ve got to work hard. Getting the Boy George support was amazing. I came to London, ended up in the Pussy Posse thing before Featherz. I’ll be writing a book; so much has happened to me. So, do your own thing, don’t compromise!

DM: You may have gathered, there is a spokesperson for the band.

DC: Who? (Laughs). We are The Featherz, there is nothing else for me. I’d rather die than give up. Our songs are statements. It really is all I can do.

So, what is next for The Featherz? Touring / albums?

Several dates in August, September 11th at the Hope And Anchor, 12th at The Unicorn with Healthy Junkies, all details are on our Facebook page and at artistecard.com/TheFeatherzOfficial. We will be releasing a single in September, with a launch gig at an unusual venue. An album will be coming after that. Exciting times!

And there, we must leave The Featherz. Much more was said and discussed, as expected from the band who brought you ‘When Was The Last Time You Had Sex?’. Time restraints, and a serious problem with my keyboard, means I’ve had to edit. So, if you love glam, tunes, energy, sex, entertainment and a good night out (I think that’s all of us), go and see The Featherz soon. We need their ‘Flock Rock’ to bring some colour to our lives.