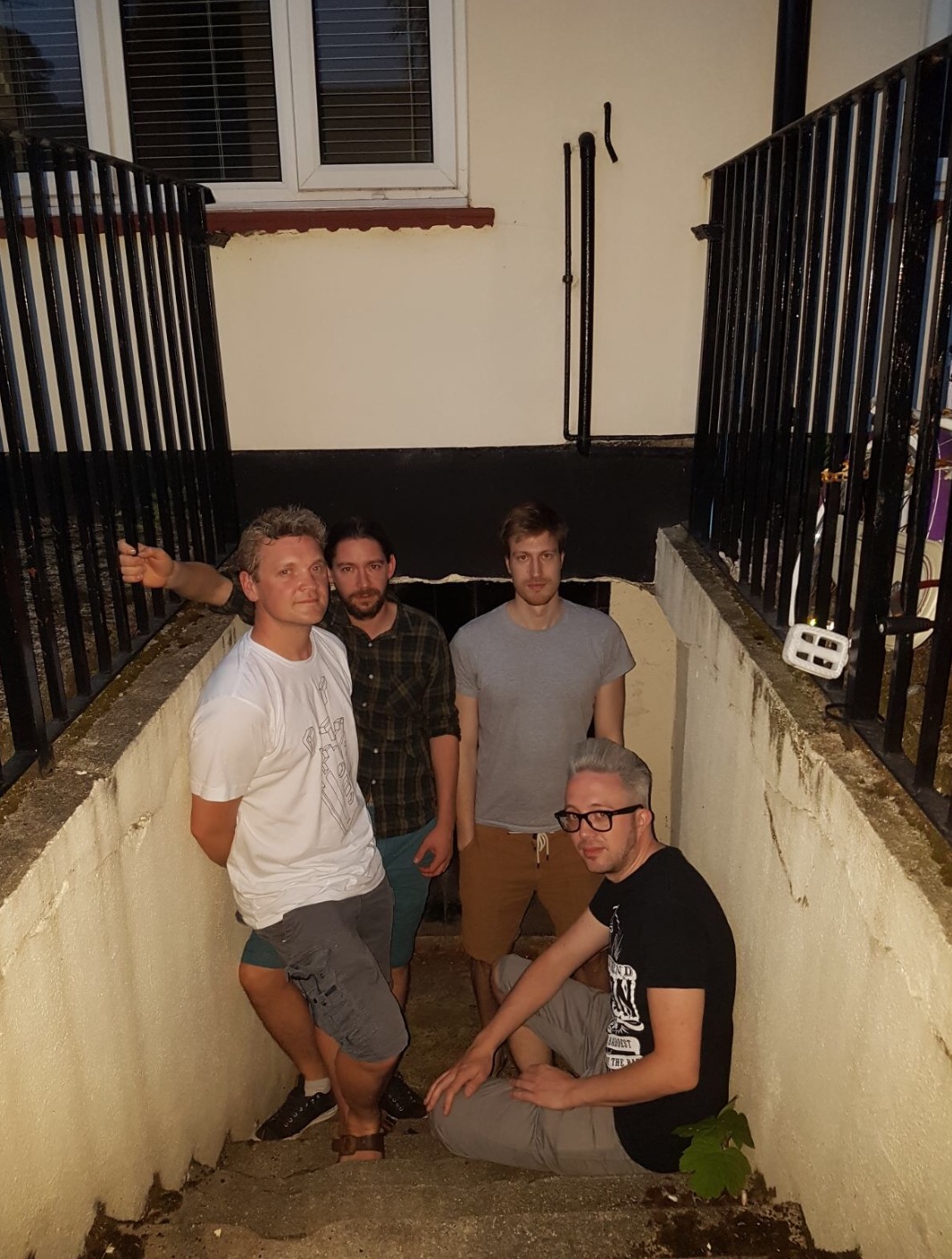 London based faction Evil Edna has procured a new meaning to the genre, Gypsybilly Rock! Similar to the sounds of The Legendary Shack Shakers, the band is quickly creating some buzz with their style of ‘Booze-Blues’ with their single, Red Velvet Cake. 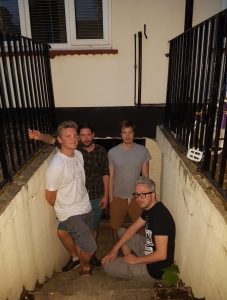 Evil Edna members consist of frontman Paul Cockerham on vocals, and harmonica (one in every key ever created), Sam Taylor on the bass, Joe Thompson beating the drums and Simon Land on guitar. Together they create a powerful sound that’s about to sweep the music industry.

Louder Than War rounded up the bunch of them (even late Simon) and had a heart-to-heart chat about their music, their inspirations and the way Paul sweats on stage.

Louder Than War: What the hell is Gypsybilly?

Simon:  I guess it’s kind of a sleazy rockabilly, but with Gypsy influences.

Are any of you gypsies?

Paul: No…When we had our first rehearsal, because I’m the harmonica player, I went out and bought a whole bunch of harmonicas, and one of them was a harmonic minor, a harmonica in a minor key, and it had a very gypsyish sound. The gypsy was born. So we kind of decided to throw that into the mix. The second song we did is called The Curse, and that is very gypsyish we think. We have another couple of gypsy ones using that type of harmonica. I guess that’s where it comes from.

All of them: Yeah!

Joe, give me a little band history, how you originated?

Joe: Sam and Paul, we all had an Elvis cover band, for one night only.

Paul: Yeah, we all dressed up as Elvis.

Joe: I was Afro-Elvis, I had a big Afro.

Sam: I was Jailhouse Rock Elvis.

Paul: So that’s how we knew each other, but after that we met Simon at a Legendary Shack Shakers gig, who we totally love.

Simon: I met a girl, and this girl knew these 3, and now she is my fiancé.

So Simon, you got a band and a wife in the same night?

Your music is awesome, and you’re going to take this far.

Paul: We’ve only just started, we’ve only done 3 gigs so far. The first gig was at Christmas time last year. We’ve only been around for about 6 months. So we are very new to it, nice to hear that you like it. The last gig we did two weeks ago with the Glam Skanks who opened up for Adam Ant. It’s a small world, isn’t it?

In 10 years do you see yourselves together, playing music?

Joe: I hope so. I’m thoroughly enjoying it.

Paul: I see us on the Pyramid stage.

So your song was played on The Jimmy Star Show last week.

Paul: I know. That was good fun actually. I listened to it on the way to work on my bike. I wasn’t expecting it, and I nearly fell off my bike, into the canal.

What musical groups are you inspired by?

Paul: I think the obvious one is The Legendary Shack Shakers.

Joe: they are the best live band in the world. They are playing here next month and we are all going to see them. Their frontman J.D. Wilkes, he’s their harmonica player, he is over the rainbow.  We also like bands like Daddy Long Legs, with a similar sort of harmonica frontman.

Joe: There is a really cool guy out East called Son of Dave.

Paul: He’s like a one man show. He is fantastic as well.

Simon: I would love a big crowd and they’re all singing the words back to you.

Paul: Everybody in the audience has got a harmonica, and they’re all playing my harmonica riff.

Sam: I like the adrenaline, when everyone’s on it, and you’re in a good mood the crowd sort of pick up on that totally. When that happens, we sort of get into it. It’s like a virtual cycle. I like that about it.

Joe: When you can look out into the crowd and see that they are enjoying it. That’s a great feeling.

Simon: I would say I enjoy it because it makes me feel alive as it were. Not that the rest of my life is boring, I just have so many things going through my head when I’m playing live, like “why isn’t that person over there enjoying it”? There’s so many things that go through your brain at light-speed. I have an amazing brain. Humans are amazing.

Paul: I like screaming my head off. When you get a chance to do that it’s not like at rehearsals, you get to scream your head off.

Simon: He sweats, every single time we play.

I love that. Who thought of the name Evil Edna?

Where can someone find your music, do you have a CD out?

Joe: Not a CD, we have the EP on line, on sound cloud. That’s where we put it only. We did 8 songs in one day. Five of them are out. It’s called The Evil EP.

If you could say anything to Evil Edna fans-to-be, what would you say?

All: Come to our show, enjoy the music, love us…

Simon: Come and get a bit of Paul’s sweat on you.

Sam: Let Paul leak awesome all over you.

Any gigs coming up?

Paul: We’ve got one coming up in August at The Spice of Life in SoHo.  It’s right next to the Palace Theatre. It’s a good gig. We’ve got another one at The Islington in September.