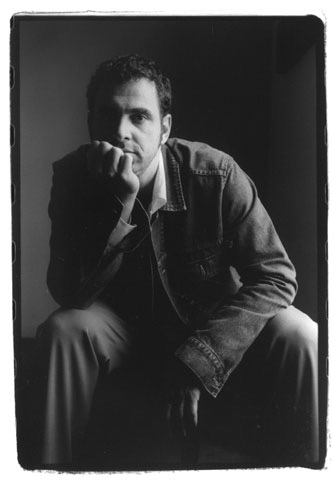 Singer, songwriter, profit, Eric Anders has just released his new 12 track album, entitled: “Big World Abide: The Best of Eric Anders”.  The release spans the career thus far, and contains one of the  most artistic songs that I have ever heard called, “Tethered to the Ground”.

Louder Than War was able to become enlightened by an interview with Anders, and his inspirations and motivations behind the album and his music.

Louder Than War: You are very talented and have a beautiful voice. What inspired the song ” Tethered to the Ground”?

“Tethered to the Ground” was inspired most by my collaboration with Mark O’Bitz, the guitarist with whom I’ve written most of my songs.  Mark is a very talented guitarist and songwriter.

The lyrics for this song were inspired by the best review of a novel I have ever read: “Harvest of a quiet eye: J. M. Coetzee and the art of lucidity,”  by Jennifer Szalai (Harper’s Magazine, July, 2004–attached below).  I was reading this issue of Harper’s while Mark and I were recording some demos at my home in Los Feliz, and the lyrics came very quickly to me.

I had recently read Coetzee’s odd and brilliant novel about an elderly and very famous female novelist: Elizabeth Costello.  I was later wowed by Szalai masterful reading of the novel.  I think quoting two full paragraphs of Szalai’s review, then followed by my lyrics for “Tethered to the Ground,” would be a good way to summarize what probably should be a very long discussion of the lyrics and music that came out of me that day.  I apologize for how long the passage is:

Beliefs that aren’t in any way tied to the earth are the ephemeral debris of overactive minds. The last Lesson of Elizabeth Costello, entitled “At the Gate,” depicts what seem to be Costello’s attempts to pass through the afterlife (toward … what? it is never really clear) only to be deterred by a panel of judges demanding from her a “statement of belief.” As a writer, Costello tells them that she is a secretary of the invisible, believing whatever she needs to believe in order to give voice to those who choose to summon her. Unsatisfied, the judges ask her to return another day with a different answer, and Costello begins to realize she can only believe in that which “she does not have to invent: this dumb, faithful body that has accompanied her every step of the way, this gentle, lumbering monster that has been given to her to look after, this shadow turned to flesh that stands on two feet like a bear and laves itself continuously from the inside with blood.”

Neither reason nor religion is in any way involved in this revelation, which is described in animal terms (“like a bear”) rather than by an appeal to an idea or to the divine. In her testimony before the judges, Costello recalls her childhood in rural Victoria and “the frogs who live there, some as small as the tip of my little finger, creatures so insignificant and so remote from your loftier concerns that you would not hear of them otherwise.” She acknowledges that Elizabeth Costello the writer could think of the frog as allegory, as a vehicle for her own imagination, “but to the frogs themselves it is no allegory, it is the thing itself, the only thing …. They exist whether or not I tell you about them, whether or not I believe in them. It is because of the indifference of those little frogs to my belief … that I believe in them.” Her conclusion echoes the kind of redemption that Coetzee’s characters eventually reach at the end of his novels: disabused of the fantasies devised by the mind, they arrive at a truth that is modest, humble, tethered to the ground. (p. 88)

And this is what was “given voice” that day of reading and recording:

Who inspired you musically while you were growing up?

As a child I remember listening to three albums a lot–Neil Young’s masterpiece, Harvest, CCR’s Cosmo’s Factory, and Fleetwood Mac’s Rumors–and that’s outside of the typical obsession of kids in the 70s with The Beatles and Rolling Stones.   My high school and college years were not all about MTV and typical late 70s and 80s fare, but it was to some degree and also not exactly alternative or edgy.  I was into Elvis Costello, The Police, Peter Gabriel, The Smiths, The Cure and, especially, REM.

I really started with my own music at the late age of thirty seven, so probably much later than most.  So my musical influences as an adult seem rather important to me too.  When I think about who influenced me most as a singer-songwriter, I think mostly of some great singer-songwriters like Paul Simon, Nick Drake, and Cat Stevens.  Today my Pandora has the following radio stations: Damien Jurado, David Gray and the Avett Brothers.  I think Damien Jurado is a genius.

I’ll pass on this one and I’ll defer to my songs to “explain.”

Do you plan to tour in support of the new release.

No.  I’m rather busy with my day jobs and family.  Particularly family.  I don’t have the time I’d like to put into music, but I also value my time with my family a lot–and my other professions.  I have a wonderful wife and three great kids, and I want to spend most of my time with them.

Is there a song on your new album that you are most proud of, one you most like to perform?

The first part of the question is difficult because I am deeply connected to all of these songs.  The non-political songs feel more personal, and so I feel a different kind of connection to them, particularly “Tethered to the Ground,” “These People” and “Icarus.”  I am proud of all the political songs too, but “Remains In Me,” “Genocide and Justice” and particularly “How Low and Why” get special mention for me.  Popular music just isn’t political enough.  Being apolitical can be politically irresponsible, especially given the general context.

As to the latter part of your question, I perform live so little in general, and this is especially true lately, it is really hard to answer. I’d love to perform all of these songs, but just don’t get a chance to.  I’m also a bit rusty when it comes to live performances, so I’ll need some time if I ever get back into it.

I made most of my records in the mid-aughts: 2003-2006.  The industry was going through huge changes at this time.  I was in my late thirties and early forties, so it was especially hard for me as both newby and older artist to adjust to a world where the word “album” was more an idea than actuality.  My head is still spinning due to the passing of CDs.  I wasn’t trying to adjust when I made an EP in 2011.  It just happened that way with no planning at all.  I’m about to turn fifty two and … I’m adjusting.

What inspired you to join the music industry?

I never have joined it.  Or, more accurately, it has not invited me in … though I have knocked on the door many times.

Yes.  I am working on a new studio with my producer, friend and best man at my wedding, Matt Brown (emerson77.com), of Trespassers William fame.  Matt and I are concomitantly working on an EP with my usual co-writer, Mark O’Bitz.  The studio project is taking so much of my time that I am having to put off actually working on the music, so it will be a while before it comes out.  We hope the studio will be in the foothills of the Sierra Mountains, but haven’t found a site yet.  We are in the process of looking.  We want to find a location that will inspire us and all those who record there.