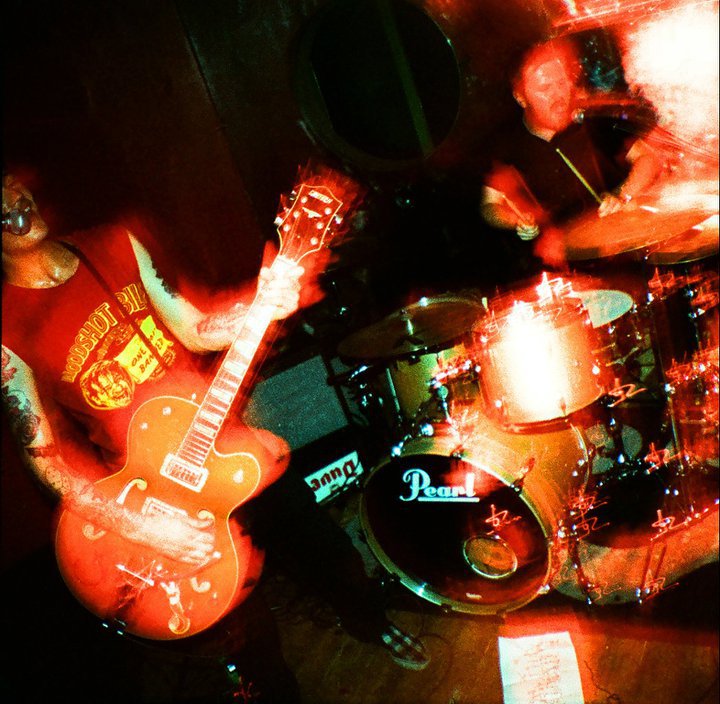 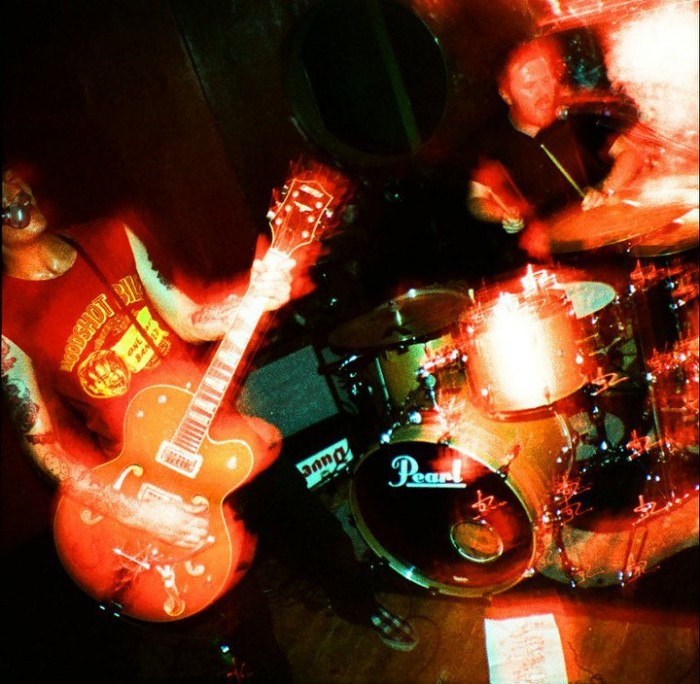 X Ray Cat Trio frontman El Nico has been on an extensive tour of the EU for weeks now following the release of their debut album, ‘Out For Blood’. The record is a beautifully crafted collection vintage rock n’ roll, instrumental surf licks and rockabilly psychosis.

Louder Than War’s Josh Cooper caught up with them from Prague to discuss tour stories, horror movies and future plans.

Hey guys, thanks for agreeing to chat to Louder Than War, we know you’re bang in the middle of a huge European tour. How’s it going? Where are you now?

Hey Josh! We are in Prague right now! We played a cool bar in the middle of a park last night. We played with a band called Atlantic Cable who do weird and awesome mix of Americana / country and songs about hydrogen and the universe. We’re going to play a food festival today, also in Prague and will be playing later as well. We are 3 weeks in and have another 2 to go.

What’s been your favourite destination so far?

As I’m on tour as a solo act, I’ve been having to rethink my set and learn how to perform that way. I’m getting there I think. I am touring with my buddy from school, Tim Loud, who has been doing the solo thing a lot longer than me and has got that shit down!

When you’re not touting surf rock abroad, your regular watering hole is Leeds. Tell us about the music scene there, any favourite local bands, promoters or venues you can recommend?

Kamil is also a Leeds bar guy and general party dude who has for some reason agreed to drive us around Europe and has been an absolute solid dude putting up with a couple of princesses and not getting us killed.

At the end of our last tour I nearly went mental so gave up booze and fun for a while. I started to feel normal again and quit my job, came on tour again and have lifted all the bans so it has been interesting. Let’s see how that works out!

Leeds has a great music scene, and you can go out any night of the week and see live music, often for free. For music, Sela bar has become a kind of home for me and my musician friends as I worked there for 5 years, put on nights and gigs there and I get involved with their part of the Live at Leeds event and we are doing a Bob Dylan tribute gig for bobs birthday where any bands who want to come play some bob tunes are invited to come along and play. Mark from Sela is cool and let’s me put stupid gigs on and supports local music cause he loves it. The Brudenell is a must for bigger touring acts, the sound there is excellent and there is a DIY family yet professional vibe going on. Nath is a hero. For drinking I’d suggest Santiago and Wax bar. I’m involved with a label in Leeds called Gin House Records , we all put on gigs and release music ourselves . If you want a good burger try Boozy Q or the Belgrave.

El Nico, you were also a member of Leeds/London-based doomsters Black Moth. What made you want leave and to go full-time Cat?

I chose to leave Black Moth mainly because I realised that life is short and you gotta do what you’re passionate about, I love those guys, but I have always played greasy rock n roll and that’s where my heart is so I had to follow that. They are writing stuff now and I still drink with dom , chat with Harriet, Dave repairs my amps and I will hopefully be playing at Jims Wedding!

Tell us a little about your debut album, ‘Out For Blood’. You recorded it entirely to onto a 4 track tape recorder?

Out for Blood was recorded by ourselves, yeah onto 4 track reel to reel. Adam Richards our double bassist has been recording that way now for a while and he is getting better all the time. There are limitations to what you can do but that’s part of the beauty of it. Even mistakes sound good like that and if you want autotune then you’re fucked!

The themes behind the record, much like a lot of Psychobilly bands both old and new, are of horror B-movies and sci-fi. Especially in your ‘Wolfcop’ video. Tell us a bit more about the albums influences. Any films you can recommend to us that inspired you?

Ok so the wolfcop thing… I somehow came across this movie and it’s hilarious. I have always loved horror movies and it’s cool when there’s some humour to them . Wolfcop is a Canadian production kinda in the style of evil dead, army of darkness. We named a track on the album wolfcop and we have been In touch with the producers and actors , sending each other stuff back and forth . We named a side project/ surf band the wolfcops and I think they were pretty happy with that. We have been shortlisted to be on the soundtrack for the sequel which is in production now and if it happens I think I will cry a single tear of joy as I have always wanted to do music for movies. A lot of the tunes we do are instrumental and have been compared to tarrentino soundtracks. I guess that would be a dream.

I can tell you what film NOT to fucking watch and that is a documentary called ‘the nightmare’ it’s about sleep paralysis and there’s a guy who tells a story about how he started getting it after a friend told him about it. Then I started getting these horrific nightmares that feel like real life. Now I have dreams when demon women try and straddle me and shadow people are in the room watching me and it makes me shiver even thinking about it.

What are your plans for the next release?

The next release will have more vocals I think, I getting better at singing so might try that. I think there will be a few dreamy teenager in love gooey 50s love songs but with dark lyrics, I have a few in the bag on the way. I also wanna do some weird monster style vocals like bloodshot bill, Dex romweber and lux. If I can even come close to that I’d be happy. There will be greasy Horror surf too for sure. Adam has got a new reel to reel recorder too with more tracks so will probs get some extra layers on and shit.

I have had a very strong coffee so I may be over sharing.

Any more UK dates planned once you’re back?

U.K. Dates when I’m home – first one at Sela on the 10th of March with the wolf cops. There are a bunch of dates check out Facebook for em, I also play in a band called howlin ric and the rocketeers and will be touring with them. That’s more of a traditional rockabilly band and I just play lead guitar. It’s real fun and we go busking for old ladies and brews. We wanna come play for roadkill again in London and are proud and excited to be part of their first mixtape release.

Thanks very much for your time and we look forward to catching up with you in the future.