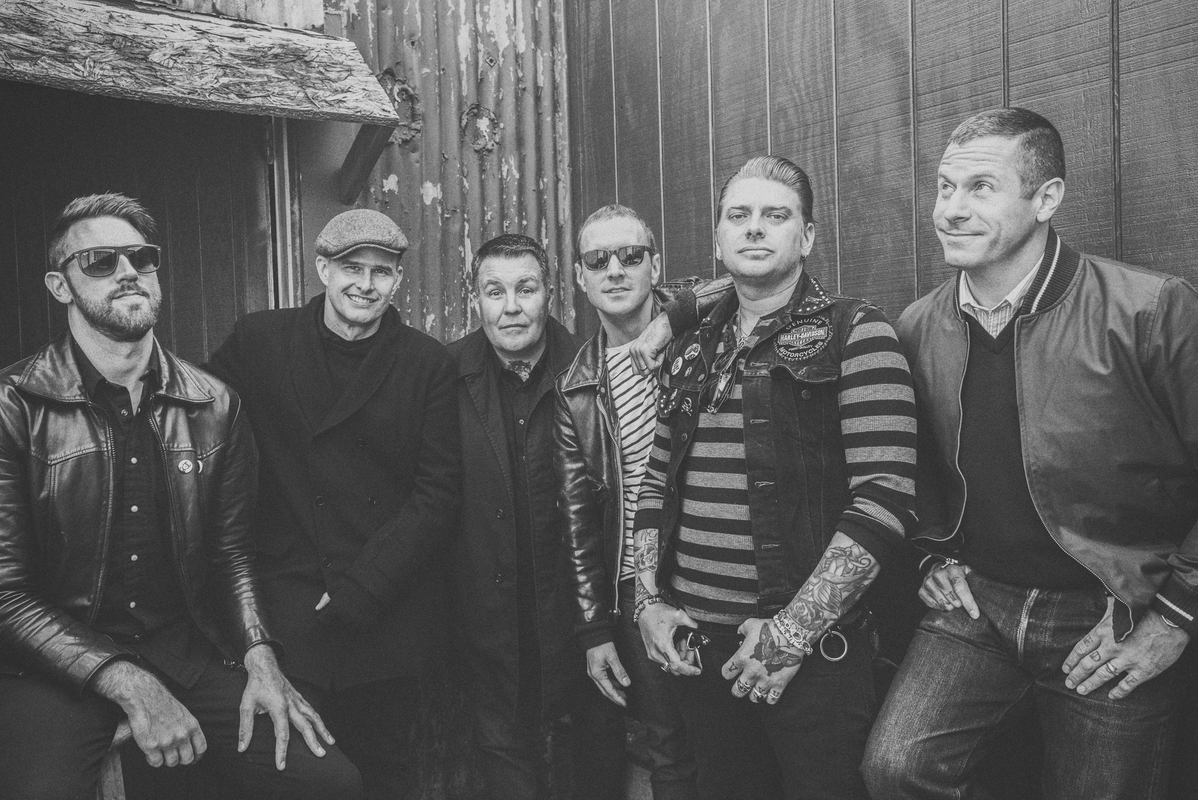 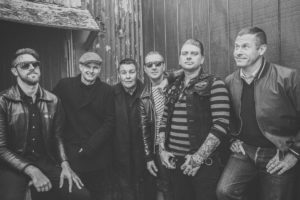 Tim and AL from the Dropkick Murphys talk to LTW about the New album , touring with the Sex Pistols and The Pogues plus not being associated with the Boston Strangler whilst getting a nod from the Boston underworld…..

The Dropkick Murphys announce the release of their 9th studio album “11 short stories of Pain and Glory” which will be available in January through their own label Born and Bred Records.

Having sold over 4 million albums worldwide they have crossed over into the mainstream whilst still remaining true to their Punk roots along with staying fiercely loyal to their fans who have always reciprocated that loyalty.

They will be always be synonymous with their home town of Boston but the band are now a global act who have collaborated with Bruce Springsteen and of course had their song “Shipping up to Boston” featured prominently in the Martin Scorsese film “The Departed” .

We met up with Al Barr (lead vocals) and Tim Brennan (Guitars, accordion, mellotron, whistles, vocals) and asked simply …
LTW “Is the album any good ” ?

They further explained that it has everything that you would expect from a Dropkick Murphys album and more as we asked how it would appeal to both old fans and possible new ones. The band feel very privileged and honoured that they have just “Stuck around for this long” and seem genuinely committed to pushing the boundaries with every new record …

Tim – “The evolution of the band came from 4 guys playing Punk Rock to gradually adding more and more traditional instruments enabling them to play a Folk song , then a Rock song, then a Punk song to eventually just playing songs in the DKM style …

Not quite a “hit” band as such, the song appearing in the Departed film definitely helped out immensely to gaining a wider audience who as Al looks back

“They heard the song in the film , liked it , listened to some other of our other stuff , checked us out live and have stayed with us ever since “

“When you play a big festival there is a massive gap between you and the audience and you have find a way to bridge that gap with the songs . You have to keep the energy going and some longer songs help as I still like to get in and amongst the people out there …”

The new album shows that they have all this in mind with some well structured tracks to sing a long to and enjoy at various paces.
The first song on the album is an instrumental version of an old Irish lament “The Lonesome Boatman” and their adaptation of it is rousing to say the least …
The album kicks on with “Rebel with a Cause” about kids who were given up on followed by the on line released song “Blood” which has a lyric video up on you tube. “Sandlot” takes a nostalgic look back to an innocent childhood while “First Class Loser” reminds us to be wary of people, including family members, who might not be worth hanging around with.

“Paying the Way” is about finding a way out of addiction with hopes and dreams echoing the bands journey out of adversity and into a better life and “I Had a Hat” is a flat out Punk one that , if it was any other band , you might think it was the token Punk one for the album but I asked Al do they ever think like that when putting a record together and he replied categorically

I believe him as the next one “Kicked to the Curb” is another Punky one ,albeit with a definite shout to Eddie Cochran , and is a song about the classic tale of a guy losing everything to a girl who didn’t really want him …. or is Sally a horse ?? I’m not sure .. have a listen and make your own mind up !

I then started to think about the bands conjoined relationship with Boston and asked “Are you now more famous than the Boston Strangler ?” to which Al replied

“I’m not sure that we even want to be brought up in the same sentence as that guy and we sure aint gonna tell you how many people we have murdered ..”

I keep on …”I heard that Whitey Bulger ( Notorious Boston gangster who went on the run for 16 years in 1994 , with his life story chronicled by Johnny Depp in the film “Black Mass” ) only gave himself up so he could come see the Dropkicks live ?”

AL ” Well actually, and you won’t hear this anywhere else, I had a friend in prison and while in solitary confinement he actually had Whitey in a prison cell next to him , and yes he loved the band but hated the film – this was the Departed film – as Jack Nicholson didn’t wear Red Socks and sport a Red Sox baseball cap in it ! Let’s hope they never meet ….

Back to the album , the next song is a cover of the football anthem “You’ll never Walk Alone” but when I ask if the band associate the song with either Celtic or Liverpool I’m informed that it was covered as it’s a testimony to all the friends they know who have lost loved ones to addiction . This is a special issue for the band who established a charity in 2009 ..”The Claddagh Fund” which raises money to support addiction recovery along with other child and veterans organisations. I kinda feel silly until Al whispers “Celtic” in my ear … Phew!
I enquire about childhoods and Al reveals that he was voted “Best Individual ” at High School while confessing to be a loner throughout most of it and Tim counteracts with

“My brother was voted Friendliest and Class Clown”

Tim missed out on any accolades himself !

4-15-13 is the penultimate song which pays homage to the victims of the Boston Marathon Bombing and is a powerful piece of music which gets across how it affected the city and themselves .

Tim “It rocked the shit out of the town…”

Al reflects “We were away touring the west coast of America and felt helpless about what to do , our first reaction was to come back but then we thought .. everyone still needs music . Strange though it seems something good did come out of it by bringing the city together but it’s such a shame it had to be something like that to do it “.

“We’ll meet Again” will be an instant set closer and rightly so , a great sentiment and a good song to finish the album although Vera Lynn might have a claim for a bit of inspiration for the chorus ….. *nudge wink !

During the meeting I asked the band about touring with the Sex Pistols and the first thing they remember is the best laminate pass ever ,

Tim “It was illuminate yellow with the Sex Pistols on one side and Piss off on the flip ! ”

Al “We were told don’t approach Johnny Rotten at all unless invited or he will kill yer … but I had a get in route as I knew an old photographer friend of his – Joe Stevens aka Captain Snaps from back in the day . After I let him know , in the catering line , that Joe said hi he gradually let me into his circle and by the end we were getting on quite well ! “

“They are the reason that I heard about the Dropkicks is that I had an English teacher who brought in a cassette tape of “If I Fall From The Grace Of God” and after getting into that he brought me a Dropkicks one . It was one of them “This teacher changed my life moments ” which fortunately a lot of people seem to have …”

There were then promises of lots of Shane MacGowan stories if I promised to turn the recorder off but there was one given about him having his own tent onstage which he would come out of , perform about 4 songs until he started to wane then go back in the tent for a bit of recuperation while the band played a song without him, then he would come out bright and alert ready to do another 4 or so songs until back in the tent for a song….etc…. No one knew exactly what he did in there but it worked !

What comes across with the band is that they really do wear there hearts on their sleeves , they believe passionately in what they do and are loyal to their roots without letting them hold them back . Family and friends are the most important things in their lives but the fans of the band really are an extension to this and they do put a lot of effort into thinking about what they would like from the band as they know that pretty much what they do naturally will be that ..

I did then think let’s test these “roots” and I gave Tim and Al a few questions abut their heritage …
Tim on Ireland and Al on Scotland !

Q1 Tim – Is Ireland the only country in the world to have a musical instrument as their national symbol True or False ?
answer “True” – Correct

Q1 AL – Where did President Eisenhower of the United States reside when in Scotland ?
Ayrshire , Angus , Edinburgh or Aberdeen ?
answer “Aberdeen” – Wrong ( was Ayrshire)

Q2 – Tim – What is the longest river in Ireland ?
answer “Liffey” – Wrong (was the Shannon)

Q2 – Al – The Gaelic for Whiskey is Uisage Beatha – What is the literal translation in English ?
answer “I can’t say on tape” – Wrong (was the Water of Life)

I then gave a final question to sort an overall winner …