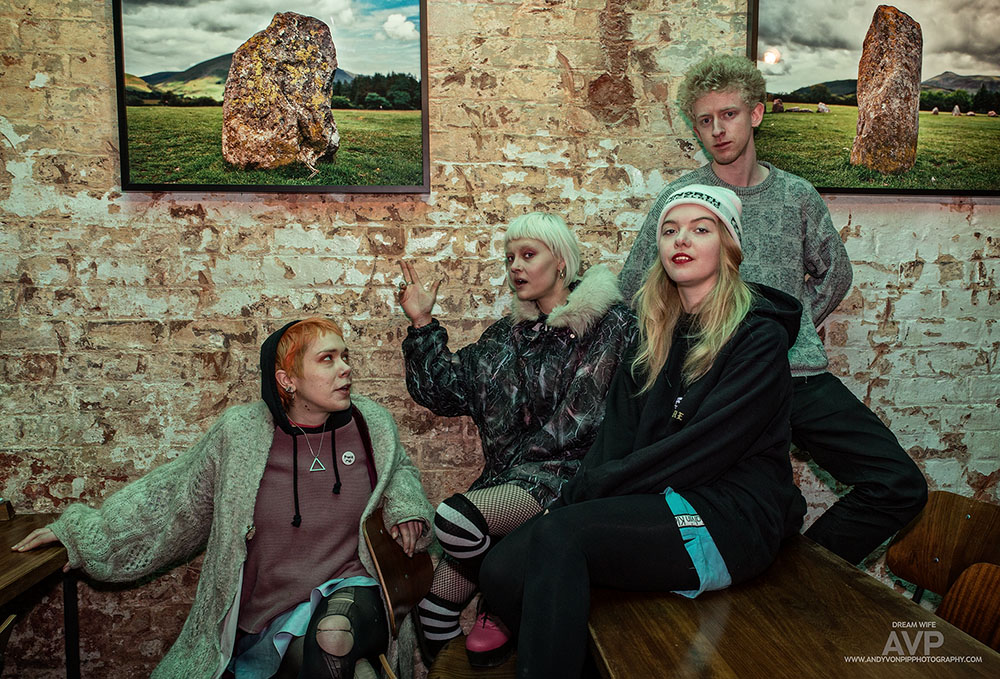 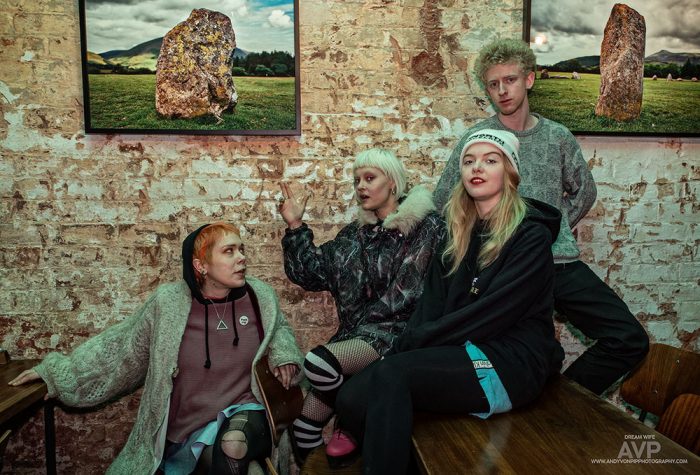 Dream Wife are a band tipped for big things in 2017, Andy Von Pip caught up with them ahead of their recent packed out Liverpool show as part of the DIY “Hello 2017” tour to talk about their rollercoaster ride from art school project to genuine contenders.

Brighton based collective Dream Wife comprising of Rakel Mjöll (lead vocals) Alice Go (Guitar, vocals) Bella Podpadec (Bass, vocals) and Alex Paveley – aka”Paves” (Drums) have rapidly established themselves as one of the most exciting young bands in the UK today. This has been due, in no small part, to their incredible live shows which have created the kind of word of mouth buzz PR campaigns can only dream of generating.  Whether it’s watching Alice Go leaping about the stage as she tears an array of gloriously twisted riffs from her guitar or Icelandic singer Rakel’s remarkable ability to switch from sugar-coated pop perfection to raging nettle sting roar the effect is nothing short of mesmerising. And of course, there are the songs, a perfect mix of infectious edgy melodic pop and grungy rock power.

The band formed at art school in Brighton, originally conceiving Dream Wife as a piece of performance art based on an imaginary girl band. The thing is, they were just so bloody good that fiction soon became reality. But at what point did they see Dream Wife as something more than an art project? Guitarist Alice Go breaks into an infectious laugh ‘“Ok can we agree that this the last time we answer this question about the art project …EVER!!’

Singer Rakel takes up the story ‘It was probably after we returned from Canada, as we’d been there for a month playing shows which were the culmination of the whole art project thing. And after we’d been back a while we started to reflect on the summer and thought maybe we should do some UK shows – for me, it was when we managed to squeeze ourselves on the bill of a friends band which was the real turning point and things have snowballed from there’

‘Definitely,’ agrees Alice ‘snowballing’ is the right word, because we’re at a point now where we love what we’re doing and we’ve achieved so much in a relatively short space of time – but its hard to define what “doing it properly” means to us. Because of how we started it’s given us an opportunity to pull in lots of other creative ideas which we are still weaving into our work.’ 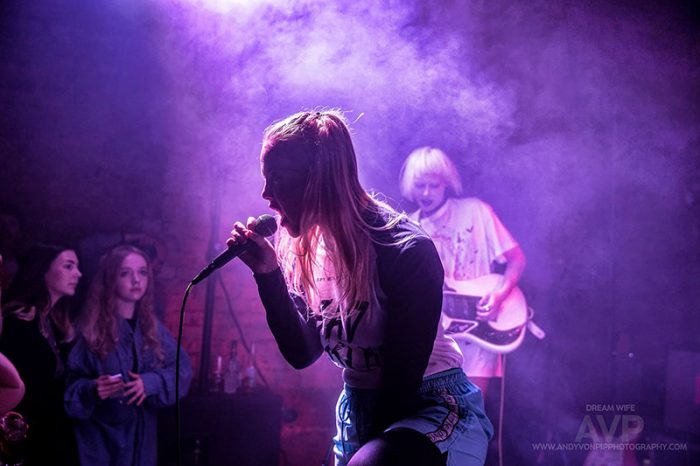 For a collective who began with no real expectation of being a band in the traditional sense, they enjoyed a certain amount of artistic freedom and were able to make mistakes on their own terms without any real pressure. However, after signing to Lucky Number Music and touring with Black Honey, they are increasingly becoming hot property. The band certainly don’t feel any weight of expectation as Bella explains ‘it was really interesting to start out from a place where you weren’t being told what you can and can’t do, and now the structure is different but we’ve got a team around us who support us. ‘Exactly’ adds Alice, ‘it’s not like we feel creatively stifled at all, quite the opposite –  we feel completely supported in what we do.  I mean we still have the same ethos but we’re able to take things to a whole new level now and feel incredibly lucky and grateful. For example, it was only last year we got (Alex) Paveley in to play the drums which moved things to a new level but we were still learning what we want as a band, how can we make certain things sound as good live as on record ‘

Bella:  ‘It’s certainly a much more complex thing than it ever was before! Things were kind of much simpler both musical and visually at the start, which was fun and exciting but now there’s a much richer tapestry we draw upon.’

Alice: ‘Yeah it’s really interesting now! For example the creative people we work with like Meg Lavender who’s making a mini documentary and photographing the tour, has a certain aesthetic which we love –  so it’s a tapestry that goes beyond just us as a unit and if feels incredibly exciting to be collaborating with all these talented people whose vision goes beyond music, it’s like a whole package.’

‘And that’s what making music should be about,’ adds Rakel, ‘I mean you don’t want to be alone in your scene do you? It’s such a collaborative thing behind the scenes and it’s really inspiring !’

The band’s debut EP, the factual and correctly named “EP01” managed to capture the zest and electrifying energy of their live shows, but as Alice explains it was a very DIY affair, and there’s certainly been no pressure to smooth out any rough edges or refine their sound when it comes to their debut album  ‘To be honest the EP was recorded at my parent’s house, and we even had my Dad playing the drums! It was just us doing it however we could! And we learnt a lot from that experience, which helped when recording the album. So now having the opportunity to work with other people who can help us do things at a much higher level is amazing. For us, it’s not about refining our sound, it’s about making our music the best it can be in a way perhaps we can’t do on our own at this point. So the album will be a natural extension or progression rather than a separate chapter.’

It sounds a far cry from one of their first recordings a rough scratchy scuffed-up version of  ‘FUU’, a song that has more to do with getting your hair cut than committing random acts of violence. It was originally released on a cassette via Manchester group Pins’ label Haus Of Pins and hinted at a band with huge potential.

Rakel explains how it came about ‘Basically PINS  asked us to join in. We thought it would be fun, but it was a very early demo of ‘FUU’ which was essentially us just screaming a song we hadn’t even finished writing and recorded in Alice’s room. I mean we don’t take ourselves too seriously, but we do take our music seriously and our live shows. We like to create a great atmosphere and that includes the whole package,  y’know  – was the security nice to you ? could you get a decent drink before the show? Right through to the light show and our performance. It all adds to the overall experience.  I think if you start to take yourself too seriously you could eventually neglect the music which isn’t a good mix.’ 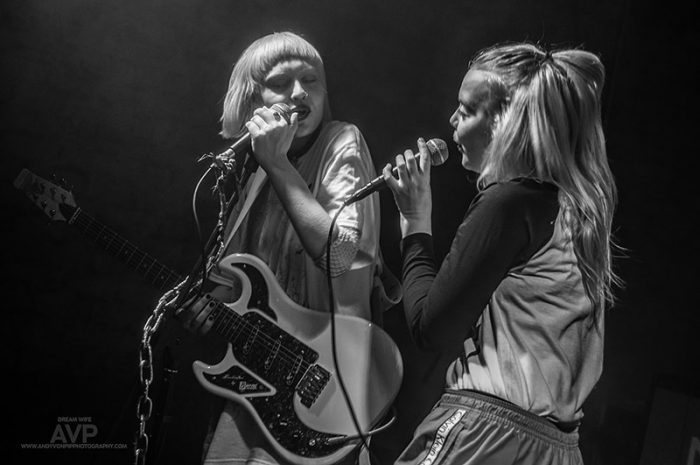 It’s been well documented the band all met up in Brighton, but Bella And Alice already knew each other through growing up in Somerset,

Bella takes up the tale: ‘Yeah we actually met at Somerset’s Battle Of the Bands at Cheddar Football Club aged 16 when I saw Alice’s band play.’

Alice continues – ‘I mean when we tell people this now it seems quite a daft little event. But I can’t remember there ever being a scene as such at the time so these sort of small gatherings seemed to take on a huge significance. And the final was at Glastonbury Town Hall which was a big deal.  And of course, I met Bella and other musicians through it. I mean you can feel isolated growing up where there’s no scene in small villages and I guess events like that helped create a scene of sorts!’

Rakel expands on the link between isolation and creativity ‘In Iceland, it’s the same! I mean every single Icelandic musician gets asked ‘how come Iceland makes so much music?’ and the answer is always  ‘because we’re isolated’! Isolation can be a positive thing in your youth, I mean it’s friggin’ cold in the winter and stormy there and sometimes you don’t want to go out at all!  So isolation can be creative. You can sit in and listen to your Dad’s record collection and I was into Myspace so was discovering cool bands in New York etc.  Saying that I’m really happy I’m in London now as the scene there represents the sort of music I want to make right now.’

And it was being in London that led to Lucky Number Music signing the band, Rakel remembers them being round at the very beginning when they performed their first London show.  ‘Yeah they were there at our debut show but it wasn’t until about a year later when they actually put an offer on the table which was around the time of the Great Escape.  We’d been building up support through our live shows and I guess when we showed that we can translate the energy of our live shows onto a recording then everything started happening and falling into place.’

There’s no doubt that 2016 was a pivotal year for Dream Wife, releasing their first material, undertaking their first UK tour with Black Honey and generally winning new fans left right and centre on the back of their adrenalin-packed live shows, but what have been their highlights?

Alice ponders the question for a moment ‘It’s hard to pick one highlight, it’s been one great thing after another. And now this year already we’ve got SXSW, followed by California dates with The Kills, which will be amazing. We were down to tour with them in Europe last year but Alison Mosshart was ill and it was cancelled 40 hours beforehand and to be honest we were heartbroken and thought we’d missed out on an amazing opportunity. Then this year they came through with this offer, which more than made up for the earlier disappointment! ‘

Rakel agrees  ‘Yeah I can’t pick just one moment – I’m just enjoying every single minute of it! And hopefully, this year it will continue. I’m really honoured and excited that the Kills have invited us on their 15th Anniversary tour, they have been such an influence on so many people.’

And of course there’s the not insubstantial matter of the debut album.

Rakel: ‘Well the albums almost done, we’ve recorded it in December over a week where we put in some blood sweat and tears in a recording studio in Notting Hill which was like a 1970’s spaceship. But we only did a few practices for each song and we recorded them live in just a couple of takes so we could really keep that live energy’

‘We recorded it to tape rather than multitracking it ‘ says Alice ‘putting it on tape made it really feel like  “Ok this is it – let’s go!” but it was important for us to make each song  a “happening moment.” It was a really great experience as a band and I feel really proud we’ve come so far. And seriously, it’s banging! It’s really banging! I mean when you hear the tracks recorded to a level you can’t get yourself at home, well, quite honestly it’s blown my mind! We haven’t got a release date but it will definitely be this year, so watch out it’s gonna be a rocker !!’