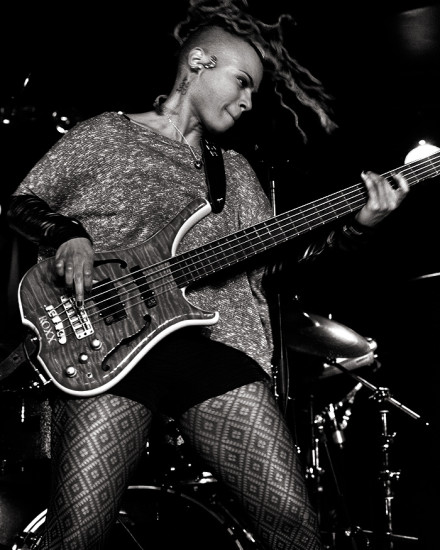 Not only is she Beyoncé ‘s bass player, but she also plays bass for: K Michelle, rap star, B.O.B., and has appeared on television shows such as Ellen, The Queen Latifah Show, MTV Live From Malaysia, Arsenio Hall, Wendy Williams, Oprah, Saturday Night Live, and the list doesn’t stop there. Roxx had also performed at The White House for President Obama.

She has won countless awards, covered many magazines, toured the world, but despite the fact that she’s played with so many iconic artists, as a solo artist, she shines the brightest….

I’m sure that “We Are” has the power to change the world. Was there anything specifically that inspired you to write it?

Wow, that’s amazing you think the song has the power to change the world. I was just trying to transform a few hearts when I wrote it. It was inspired by my late professor June Jordan who taught ‘Poetry For the People’ at UC Berkeley. She used to ask us to think about what we would say to the world if we were given two minutes to do so. That’s my approach to writing, saying something impactful, something inspiring. June presented a poem titled, ‘Poem for South African Women,’ in 1978 to the UN where she ended it with the phrase, “we are the ones we have been waiting for.” Ultimately it was June who inspired the song, who inspired the message. She was really special to me and I miss her tremendously.

What made you fall in love with the bass?

I still don’t know what it was about the bass. It was the first string instrument I picked up and I was just mesmerized by it. I still am. The depth of the tones, the way it feels in my hands. It captivates me and that’s hard to do cuz I’m usually all over the place in my mind. The bass focuses me.

Your songs speak to people, inspire and motivate them. What’s it like to write songs or record them, in a Twitter generation?

Its tough because no one really has time to sit through a song anymore. Everybody’s attention span is so short. But I didn’t take any of that into account when writing the album. I love writing, always have. I really focused on writing from the heart on this album. No matter how short your attention span is, a heart to heart transmission cannot be overlooked, rushed through, or ignored, so I just hope people take a moment to listen. If they just listen, they may feel that heart transmission cutting through the 140 characters they’re used to interacting with.

Do you feel as though you were made to perform music, that the choice was laid out for you before you were even born?

That’s a really interesting question. We all have affinity with different things and I think in some ways music is in line with my affinity. I enjoy performing. I enjoy the writing process, the uncovering. I think more than anything I’m just passionate and I’m able to express that passion though music more so than any other medium.

What is the feeling that you get while performing live?

Performing live is probably as close to being a free floating spirit as one can have while still being inside of this body. That’s what its like for me anyway. It is beyond words. It is the ultimate expression of self, a pure exertion of energy and better than almost anything you can experience as a human being.

Do you have a favorite music genre? While growing up, whom did you listen to on the radio?

I grew up with my ears glued to the radio. From Prince to James Brown, Michael Jackson, Aretha Franklin, Chaka Khan, Bob Marley, The Roots, Anita Baker, Lenny Kravitz, KRS-1, Outkast, Goodie Mob, Joi, TLC, Eight Ball and MJG, The Red Hot Chilli Peppers, P-Funk, S.O.S. Band, Confunction, NWA, MC Lyte, Queen Latifah, 2Pac, Biggie, Nas, The Temptations, Diana Ross, Marivin Gaye, I mean the list goes on and on, Miles Davis, Herbie Hancock, Jaco Pastorius…….so many artists, so much music was playing in my house. I know lyrics to songs and don’t know who the artist is….it trips me out sometimes, a song will come on and I’m just singing along and I have to look to remind myself who the artist is. I wonder if there’s a limit to the number of songs one can know the lyrics to.

Are you planning a solo tour in support of “ImPossible”?

We are currently working on a US and European tour. We have some dates confirmed, but I’m a real independent artist. There is no label, no major sponsors. We are a very small army so its a serious grind to put together tours with all the details that go into it. We’re making it happen though, bit by bit.

Can you recall the most joyous experience you’ve ever had performing live?

Every time I get this question, my answer changes. I’ve been performing for a number of years and I am thankful that I can still get on stage and have fun whether it be with my own band or playing bass for someone else. I have to say one of the most joyous experiences I had outside of playing solo was while playing bass with Beyonce. We performed for President Barack Obama and his family at a White House state dinner not too long after he took office. It was surreal. We were there, at The White House playing for the first Black President and his family and I was so happy, so elated. I’ve been really fortunate to play some of the places I’ve played with some of the artists I’ve played with. I never take time to really think about all the amazing things I’ve had the opportunity to do. I can think of a few joyous instances performing live but that one stands out for sure.

Do you have any future solo projects in mind, what’s next for Divinity?

I’ve been writing children’s books and music for some time now and I’m working on having some of that material published. I really enjoy writing for kids, especially because I have a niece and nephew I’m obsessed with. I’d also like to get into writing music for TV and Film. I’ve been thinking of writing a play and a couple of books of fiction. I’ve started a couple of manuscripts here and there but haven’t really sat down to focus on them. I’d also like to do some public motivational speaking.

Your biography has just been written, what would it be entitled?

It’d be an autobiography and the title for now is a secret. ;).

All words by Eileen Shapiro. More of Eileen’s writing can be found in her author’s archive. Photo taken from Divinity Roxx’s official website.