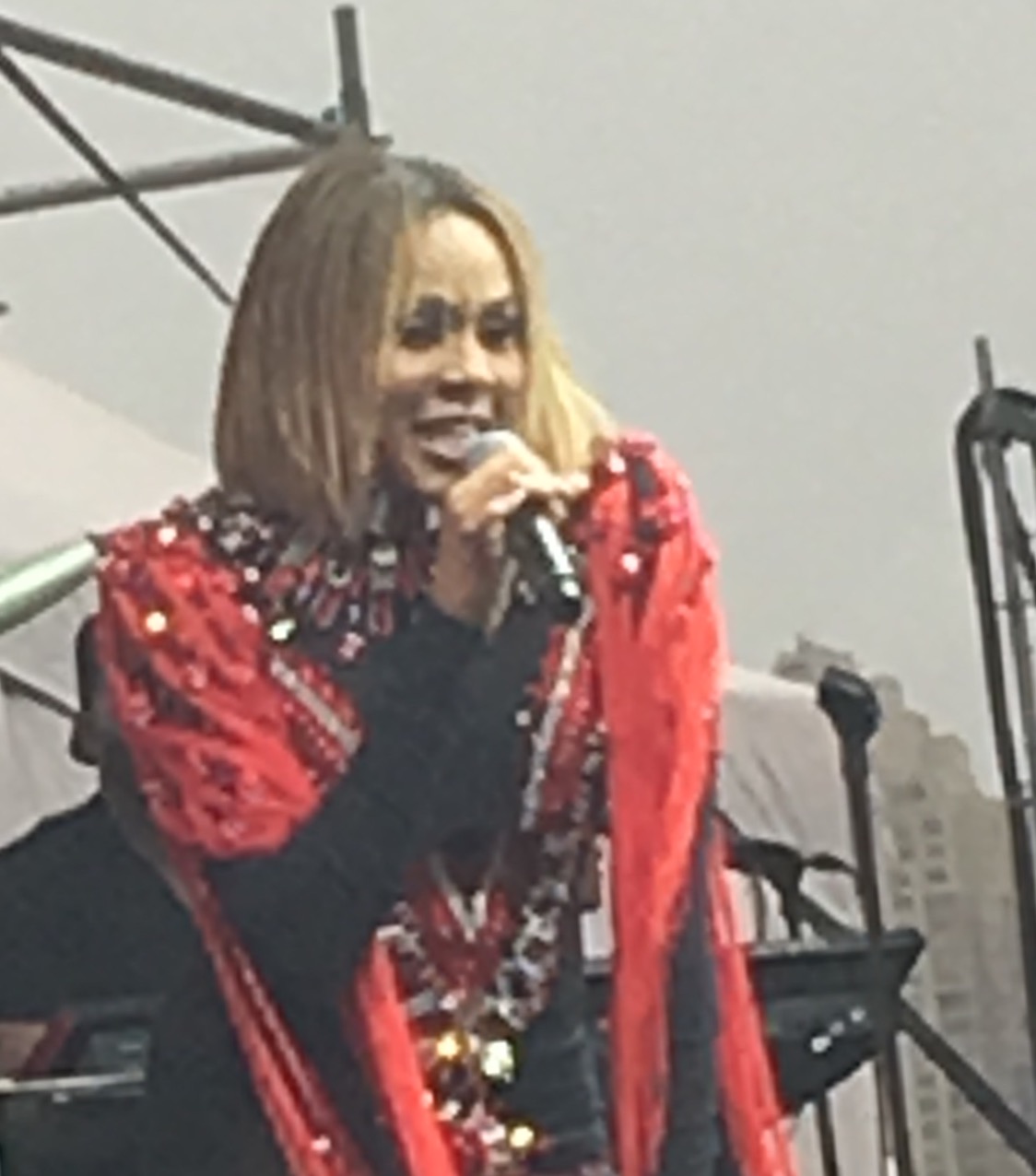 In the midst of her extremely successful, starring role in the national tour of the new musical The Bodyguard, based on the iconic movie which starred the late Whitney Houston, R&B sensation, Deborah Cox will be headlining at New York Pride along with the phenomenal Patti LaBelle . 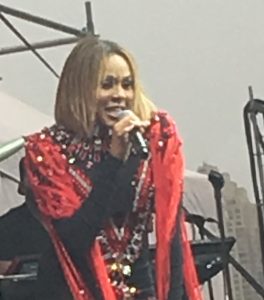 Louder Than War: I’m excited that you are going to be performing at New York City Pride. Does that have a special meaning for you?

Yeah, I think that with every pride I do, which might be different, it makes it more special in New York where it all started. Performing with Patti LaBelle, on the stage out there, I feel like it’s come full circle. We started there, I had a great run, and now I’m back doing what I love to do, really seeing the movement progress, seeing a lot of laws change and to still be here and around to help commemorate that, and celebrate that, is really great.

It’s gotta be cool sharing the stage with Patti LaBelle.

Oh yeah, big time. This will be the first time too. It’s crazy, and I’m really excited. Our paths have crossed many times, actually, including the very song that became my signature hit. That song was originally written for Patti. Had she not turned that song down, my whole situation would’ve gone a whole different way.

Isn’t that a great story?

Yes! Do you think she’ll be mad at you….just kidding…

No, and you know what’s funny? She actually performed it in her set. I don’t know if she still does, but she included it in her set when she talked about the songs that you turn down. It’s funny.

What can the audience expect to hear at the concert from you?

I’m going to mix it up. I thought it would be really fun this time to include some of the earlier hits, some of the more soulful songs, I plan on doing that, that night as well. They will get a nice hodgepodge of dance stuff, along with soul stuff, and a couple of the Broadway things as well.

Broadway should go over big and pride.

I’ve gotten a lot of requests on Facebook. The great thing about social media you can really stay in touch with the audience. I’ve been getting requests and a lot of people have come back, wanting to hear a lot of the songs I’ve done on Broadway. And they also want to hear ballads, so I’m going to through that in the set.

I looked at your Facebook page today and I saw cute little Isaiah.

Yes, he’s 13 and it just shows you, I only catch up to life through photos with the family. That’s what really tells you just how much time has passed, and how much they’ve grown. But yes he’s graduated and going to high school next year. I’m getting ready for the girls.

So, for Pride, Will you be doing some selections from The Bodyguard?

Yes. I’ve been getting requests for that too.

How is the tour going for you? I saw some of the trailers and you look and sound amazing.

Thank you. I’m actually headed to San Diego now for a week. It’s actually going very well. We started it in Minneapolis. We were talking about Patti LaBelle, and that’s where she came to see the show in Minneapolis. She was doing her own concert. We started the show in January and she was doing a show in another theatre, like across the street. She came in on that Thursday night to see the show, and we got to sort of catch up and stuff. The show has been doing really well. I think that people are reminded of the time with those kind of songs where about emotion, and you really don’t hear those kind of songs anymore. So I think they are really refreshed when they come to the theatre and leave dancing and leave crying, and go through every emotion while they are there in their seats.

The movie itself was so amazing. Where you a little nervous taking on that role?

Oh yeah. I knew the expectations and I knew that there was a lot riding on it …it could’ve went good or bad. I think that with a production like this, any kind of an adaptation from an iconic film, you’re very pressured about it. So I think when I finally did make up my mind to do it and go forward with it, then I got even more scared and nervous about it. It was like, “OMG what am I getting into”? During rehearsals I kind of saw the production was availing, that it was more of a thriller, and then on top of that there was a lot of choreography and dancing. I had to put my dancing shoes back on, and then on top of that, 13 of the most iconic songs ever that I know people are coming to hear the song a certain way. You know Whitney is our beloved songstress, so I had all of those things in mind, and I knew that I was going to be judged. So I just sort of dove in, put blinders on, and stayed really focused and disciplined about making sure that I was able to deliver these songs and continue telling the story and keeping the essence of what everyone remembers about the songs, but also having my own rendition as well. Which I think was the hardest part because I grew up listening to these songs, and I only know them a certain way. The fine line was not creating a caricature but more just developing a performance that was inspired by, so that people can again leave with that feeling that they felt when they saw the film, when they heard Whitney sing the songs.

I was blown away when I heard you sing those songs. That part had to be really hard to prepare for.

Yeah. I think with my own shows, my songs have a lot of range as well. I think that in some way my own stuff helped prepare me for this role, because it’s in the same range, the same kind of power and restraint that is needed for the role, and for my shows as well. So, I’ve kind of always got to be in tiptop shape to perform. The audience comes to hear those notes, those money notes, so I always got to be very mindful of that. People want to hear the songs the way they hear them on the radio.

That’s so true. That’s got to be tough though.

Yeah, it can be. If I don’t get enough rest, that’s a little tricky.

Yeah, how do you keep up that kind of schedule?

I generally do six shows a week, Tuesday through Sunday, and on the day of travel, that’s really the vocal rest day. I pretty much shut it down, I just don’t talk, I don’t sing, it’s a lot easier obviously when I’m by myself. It’s tougher when I’m home with the family. I use a lot of texting and dry erase boards.

The traveling yeah but, being on the West Coast where in close proximity, I’m actually driving, so it’s not flying all the time.

So, Deborah, if you could have your ultimate stage fantasy, what would you need to happen?

Oh wow, I would love to be able to do a big show kind of like with pride. I could incorporate my whole catalogue that I’ve done from the New York tempo dance stuff to the Jazz stuff. I really love performing with an orchestra. One of the things I love about musical theatre is that I get to do that. Then create a show kind of Vegas style, and then what you’d see on Broadway, with amazing sets, lights, and give people the real Debra Cox experience. That’s ultimately what I would love.

Live theatre has got to be really nerve racking.

I think it’s a known factor. When you get on stage it’s like walking a tight rope. There is no safety net so you just go out there, once you rehearse and everything. That’s the part that I really love, it keeps it really interesting for me. Musical theatre, there’s just nothing like it. Coming to tell a story and to perform with the full cast…. an orchestra, you tell a story while the audience is there having this amazing experience. That’s kind of what I love about the whole experience of musical theatre, doing what I do.

You have dates all the way to December.

Oh yeah, it’s a long tour but I have some layoffs where the show will be on hiatus for two or three weeks. It is a long tour but there are moments where I can branch out and do other things which is kind of cool.

I still just can’t get over your Patti La Belle story still.

I know. It’s just so amazing. How random is that.

A meant to be random.

Yeahhhhhhh, and then to heard that we were doing this Pride together is was amazing. She’s one of those people, those iconic women who just transcended for decades and they’re still here doing her thing, and still sounds so amazing. For me, that’s kind of what I’ve been striving for. That Longevity. To be able to continue to be relevant and stay relevant, and be able to perform for the audiences as they continue to grow, and also bring my music to a new generation.

For sure. If you could say anything to your fans and followers what would you want to say?

Just that I love them. I love social media it’s allowed me to have more of a communication with them because I get so much feedback on so many different things. It helps because a lot of times I am in the bubble of working to put the shows on. I’m not really mindful of the fact that it’s been a minute since I’ve had a new album out. I’ve been really busy doing a lot of things, but what people remind me of is when I last had a project out. It was about eight years ago. Time just goes so quickly. I just want to thank them for continuing to stay with me and stay with me while I go through all my artistic changes, like when I want to do theatre, or do a jazz album or a tribute album, or a dance record. They’ve been with me as an artist, they’ve stuck with me all those years. I’m just really thankful for the community and the audiences who have just allowed me to be the artist that I want to be.