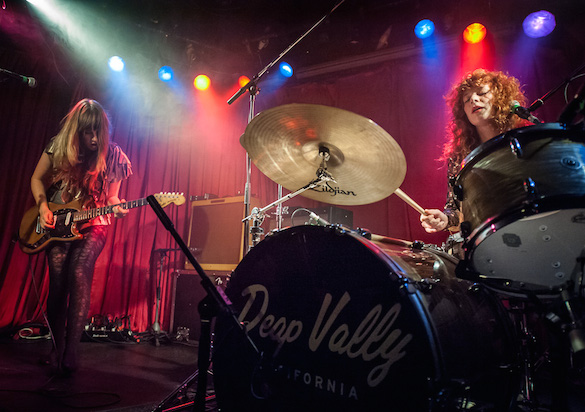 The festival mecca of endless sunshine, positive spirits, left-field nostalgia and top notch cuisine, Secret Garden Party, this year played host to two of LA’s fiercest individuals, Lindsey Troy and Julie Edwards, aka Deap Vally.  Waging sonic warfare with their lustful, primal sound, the duo first caught our attention last year with the release of their debut album, Sistrionix. After a long car journey stuck in traffic, the pair arrive safely backstage to have a chat before their set with Harley Cassidy.

Secret Garden Party doesn’t mess around when it comes to booking some of the most exciting and enticing acts around. Especially acts who pair fierceness with energy to deliver storming sets time after time. So Deap Vally were a sure given cert, right? Lindsey and Julie have just arrived backstage and after a brief chat about traffic and British weather, our interview begins pace:

Louder Than War: What are your thoughts of the UK in general?

Julie: We love it. You guys have been so good to us. You know, we’ve played so many festivals here, and we’ve received a lot of love. I just had battenburg cake for the first time.

Oh really, what are your thoughts?

Julie: I thought it was fantastic! We don’t have it at home; it doesn’t exist in the US.

That’s shocking. This is your first time at Secret Garden Party, what do you know about the festival so far?

Julie: Everyone says that everyone is out of their minds on drugs at this festival. Other than that, everyone was really excited or jealous that we were playing.

Lindsey: Yeah, people have told us great things about this festival.

It’s meant to be quite a magical festival, are you going out afterwards to have a look around it?

Your debut album was incredible, I’ve actually got it on vinyl, are you working on a follow up?

How is that process going? Is it kind of the same as the first or is it different? Because obviously the last was your debut so is the second album a whole different means?

Julie: Well, I think it’s different, you know with the first album we wrote with dreams in our mind of what would happen but with no specific notion of what would actually happen and now it’s like, when we look at the record, we kind of wrote ahead and know what it’s about. I think it feels different to write it.

Lindsey: But it’s also like, you know, a lot of the songs that were on Sistrionix, like Baby I Call Hell for example, that was the first ever song we wrote as a band and so that song was written, like, three or three and a half years ago. So, we’ve really grown a lot as musicians. So, it’s exciting writing a record now, being a lot tighter as a band and just being better players.

I mean, I saw you play Isle Of Wight, that was the first time I saw you guys play live and I love the fact, as a duo, you’re really tight. How do you prepare for your live show?

Julie: I think we both believe in the power of rock and roll. Melting faces and blowing minds, sweating and giving everything to it and experiencing it fully, for better, for worse. I mean, sometimes we’re elated and ecstatic after a show and sometimes we’re full of rage after a show.

Does that depend on the audience’s reaction?

Julie: It depends on so many things.

Lindsey: A lot of stuff we’ve written is inspired by growing up or at least I can speak for myself like the stuff that really touched me was performers that would just give themselves completely to the experience of performing on stage. Even to watch old performances of Woodstock or old footage of Jim Morrison or Hole or bands like that, that really just gave their soul.

I think for any artist, from what I’ve gathered reading autobiographies or watching documentaries, there’s always that one person whose got them into music or made them think – “I wanna do that, I wanna be in a band”, so who did you enjoy growing up or what did your parents listen to?

Julie: I had an unhealthy obsession with The Who, for two years. My brother was in a band in the 90s called Failure, so I think probably, I don’t think it would have occurred to me necessarily but like going to small venues and seeing little bands and all that, I don’t think I’d have known about that if he hadn’t of been doing it. I think for me, I owe my life trajectory to him.

That’s actually really nice to hear. Are there any new bands from where you’re from?

Julie: A lot of them are really melodic, heavy… what we might call psychedelic rock bands. I mean, LA, it’s a huge town, full of aspiring artists of all kinds; there are thousands of bands there.

Because of the lyrics within your work, everyone’s like “yeah, Deap Vally, they’re feminists”, what do you make of that?

Julie: I mean, we’re totally into that, we’re not down on that, I don’t think we’d ever be against feminism. I think we work well into the feminist ideas, like women being strong and equal and asserting themselves, representing themselves.

Lindsey: Yeah, being a feminist was always a big part of my identity, especially when I was young, in high school and stuff, it was very important for me to rebel against sort of, the status quo, whether it was shaving my head or something.

That’s what my mom did. She became a skinhead. Which I think’s really admirable, especially the fact that it’s my mom!

Lindsey: Yeah, that is cool! It’s very punk rock. When I was younger, it was a very, sort of, physical ways of showing my feminism, as I became older it became more subtle. More just challenging the music.

Julie: Back then, in some weird way, feminism in the western world was more acceptable. I know in the states we had Tank Girl and G.I Jane and Riot Grrrl, it was cool. I don’t know what it is now but I definitely get the sense there’s a backlash against it.

I think so too. This whole new wave of it with so many articles claiming the forebearer’s are people like Miley Cyrus… what do you think of that?

Julie: I think in terms of her being brave and having vision and just deciding to show it to everyone, regardless of what anyone thinks, I think, more power to her. She doesn’t have to adhere to any notion of femininity or popstar or whatever.

Lindsey: For us personally with our writing process, we feel very strongly about and very protective over our artistic vision and it being a pure woman’s point of view. Her type of feminism is very different to what ours is. We have a lot of empathy for her, because we both come from Southern California and we both come from a culture of seeing child stars and it’s really hard because you’re just surrounded by these blood sucking vampires and surrounded by adults who wanna make money off of you regardless of whether it’s good or bad for your wellbeing.

Is this something you still experience? Or do you feel you’ve side-stepped it?

Lindsey: We’re not thirteen years old so it’s a lot harder for them.

Julie: It creates a lot of conflict. We’ve created a lot of conflict with people in our short lived career, butting heads with people, people thinking they know better with what we should be doing with our music. I feel, instinctually, we know better, like what our best songs on radio would be, I think we just know. I also on another level, on a feminist level, feel like we have the absolute right to have the ultimate say, whether it fails or it doesn’t. Period.

Would you say you make music for yourselves or do you think about an audience before you create the music? Or does it veer between both?

Julie: I’d say it’s both. Cause it’s not like this, brooding, personal, I mean it is personal but the whole point of the rock and roll show is the-

How do you find festivals to gigs?

Julie: I think you learn different things from festivals. Gigs, have like, headlining shows, you learn how to play a long set, like get that dynamic going with all that length and time, which I found at first kind of daunting, but the more we’ve done it, the more I have really have enjoyed it a lot. I mean, festivals, usually the sets are shorter, so you really have to pack this punch.

Lindsey: It’s apples and oranges, there are benefits to both and every festival is so different and every gig is so different. I mean, being at this festival right now is incredible, I really like the social aspect of festivals – it’s nice to be able to walk around and run into people and other bands you know and be in the sunshine and stuff.

Finally, if Deap Vally have a mission, what is it?

Lindsey: To just be courageous and inspire courageousness in other people.

All words by Harley Cassidy. More work from Harley by checking out her Louder Than War Author’s Archive.