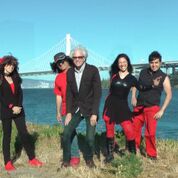 Drummer and lyricist, David Kendrick, (Dekay), has been doing music all of his life. As drummer for Sparks and Devo, he has played huge arenas, and sold out venues. More recently, DeKay has teamed up with guitarist and lead singer, No in writing the second album for the psychedelic band Revolushn. Along with Guinevere Q on bass and vocals, Young Sun on guitar and vocals, and Schubert Ola on keys and vocals, they have come up with a super psych rock masterpiece, entitled Further.

The album explores topics and themes quite out of the ordinary audaciously straying from the typical love song. With songs like Dinosaurs, Weird Little Minds, Dog Gets High, and Time+Travel=Time, they explore the universe from a higher dimension, with a full,  eclectic sound. Both uncharted and unexplained lyrical geniuses. DeKay and No, have managed to invent a musical realm of disbelief.

I’ve recently spoken with No about the music, and decided it was DeKay’s turn to explain himself and the creation of Further.

Louder Than War: What is your perspective on Revolushn and its music?

The first record was kind of a mishmash frankly. No had just gotten back into the idea of playing music. We live about 300 miles apart. I’m in Los Angeles, and have been for decades, and have always played music. That’s kind of all I do. I’ve known him since the 1980’s and we’ve periodically been in bands together, and have written songs together. Then he disappeared to Denver for 10 or 12 years, and ended up with this other life, as an engineer doing good stuff for the planet. Which to me was, “where did that come from?” I’ve known him as a slightly spaced out, very talented musician. He was the guy that would say, “Oh, the gig was this Tuesday?” That kind of thing, and now he had this whole other side. He’s like bio engineering, and making ethanol fuel plants, all this stuff, but still wants to play guitar. So we started writing again. Basically the first record was just here and there songs, without a lot of continuity, it was whatever the song was. The second time around was kind of a worm-hole of ….I’m a writer too, I’ve always been a lyricist as well as a drummer, and I’ve been in this psychedelic warm hole, in this science fiction wormhole. There’s a lot of fanatic stuff that doesn’t seem to get addressed. A lot of the same things get addressed in songs, so I really, really wanted to stretch out songs about time travel and fairy tales, biology, allusion and things. There’s a lot of love songs out so I wanted to steer it in a more of that kind of direction. Keeping in mind that I’ve been in a lot of bands that use computers, we at our best are big loud drums and No roars away on guitar. We wanted it very physical and present. So this time around we explored the idea of going further with all ideas, further into space, further into discovery, further into the elements that make us up. That was one of the first songs that started it up. We just kept reaching for stuff, in both the large universe, and then smaller. For me these songs come from word’s first. Sometimes I have a vague melody and the sometimes No would have riffs or ideas, and we’d just merge them. We worked that way when we could get together. Almost immediately they worked. It was sort of painless, which was why this was encouraging to have more of a focus. I do other studio projects where we need bag pipes or a cello, but this is a live band. We really want to be force full live, with good singing but a lot of guitar and analogue synthesizers. To me it would be a mix of the first Pink Floyd album, Clash, and Hendrix, and current stuff like King Gizzard and the Lizzard, all of that stuff. For me psychedelia is…you can stop me when you want…

There was a time in music when this thing took hold of everybody for a short amount of time. It made everybody from blues bands to folk artists, all over the world to reach further than they had been. They would play out of the norm, they had a different subject, everyone had a different vision of what it was. It was fascinating for me! Every heavy metal band when they were 15 was in a psych band. Every hard rock band was in a psych band, and it kind of keeps coming back every 10 years or so. There’s kind of a revival of it now. There’s all these cool festivals now.

Like Santiago, Paris, and the United States. So I just feel like we need to plug into all that stuff, and it’s super fun to play. This music we can stretch out a little bit live. We’ve got a couple of extra people to play live, and that could sing good. We just want to be a swirling mass of energy and ultimately we’d love to have more visual behind us. To me I do a lot of lyric driven, careful, somatic things. I’d love having it just a little more wilder, chaotic things like sets where we are going to break out and not really know what’s gonna happen. Both is us have been at this for decades, and if it’s not a blast to do it’s pointless. Every one of us kind of gets along.

Aren’t all of you married to one another in real life?

Kind of. I have an 18 year old son who is a really good guitar player…yeah, it’s kind of a whole circle.

To me I’m just driven. Really early on I got to play in a couple of groups that were idols of mine. Like my time in Sparks, and Devo, though I knew them before I was in with them.

I can’t even imagine what it would be to play with Devo.

It was mid-eighties when they took a break. There is a band with a lot of drama in it. As a drummer, you are just an outsider. I mean it’s two sets of brothers, plus the drummer. So besides all the other dynamics, there’s just brother stuff. There’s a lot of volatility in that group. The group, it’s not going to play anymore. Mark has had it, he has a great career. There’s an annual Devo festival thing in Cleveland and I go every year and play, and sign stuff. I give a talk. This year I was able to take the new Revolushn CD, and introduce all of my other projects. Jerry and I played together too. I try and stay friends with everybody in all these bands. I play with this gay guy, Glen Meadmore, he’s like six feet six. We play serious tempos, punk rock, square dance music, I’ve got my finger in a lot of stuff.

Are you really playing in a nudist colony?

Yeah. I mean we’re out here in California. This is a place that’s existed for a 100 years up in the Santa Cruz mountains, South of San Francisco. We’ve done it and I think they liked us enough, so we may do it again sometimes. There’s some alter consciousness going down there too. In that environment there’s nothing lascivious, it’s just something they do. To me it was surprising how quick you sort of went with it. We stayed clothed. It didn’t get too weird.

What is your weirdness experience playing anywhere?

It’s funny you say that because, I’ve heard now from No of a village person possibility.

I’ve asked Randy Jones to sing with you when you come to New York at the Dupkex.

One of the weirdest shows I’ve ever worked at was a New Year’s Eve show with Devo and The Village People at Pleasure Island, this kind if fake resort in Disney World, in Orlando Florida. Everyone was just high or loaded on a fake little Island. Everyone had safe hotels to go to. They played in one part and we played in the other part. That was quite an experience. There’s been a lot of strange shows but this setting, it was like a simulacra mode of a real event. It was in Disney World, for God sake…