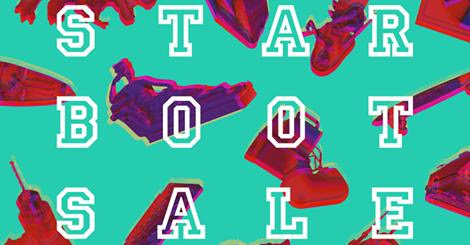 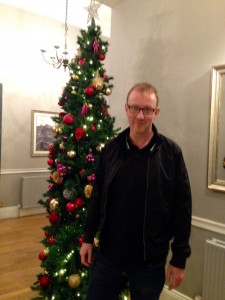 Dave Rowntree is mostly known for his role in Britpop sensation Blur where he made his mark alongside Damon Albarn, Graham Coxon, and Alex James, surfing those heady days of excess without any permanent damage. Let’s not allow that alone to define him: Dave is a successful animator, a solicitor and a long-standing humanitarian and Fabian.

Recently I had cause to speak with him about the Star Boot Sale, which was devised to alleviate the suffering of displaced persons fleeing the carnage and bloodshed of the brutal ideology that is Islamic State.

The Star Boot Sale is an auction and is occurring right now and culminates tomorrow, Sunday 6 December 2016 with proceeds going to the International Rescue Committee.

Please take the time to read this piece and decide for yourself if you would like to help, this is an appeal to all people who care.

Louder Than War: Hi Dave, how are you doing?

Would you like to tell me about this auction on Sunday?

There are two ideas really. The first, there a bunch of actors and musicians, comedians give them trestle tables, get them to set them down in a field and sell a bunch of junk from their attics to anyone who’s interested really. I planned that in the spring some time.

The second thing that we’re doing now, is a more traditional online auction, mostly kind of memorabilia and bric-a-brac from their attics. There are about seventy lots of two or three things, and most people read the brief entirely. Well Paul McCartney sent us two boxes of odds n sods…

Ephemera! Thats exactly what he sent. Other people sent rather more traditional stuff. We’ve got Alan Carr’s new suit that he wore on the cover of his new DVD, right through to a milk jug from Paul McCartney, and absolutely everything inbetween.

What kind of response are you anticipating?

It’s up and running at the moment. It’s been running for eight days now. It ends on Sunday and actually it has been great.

One of the things we’re auctioning from my band (Blur) is an ice-cream van from the Hyde Park show. So thats a pretty unusual item that you’d expect to go pretty crazy and it has.

A friend of a friend is in Vikings, he’s one of the actors in Vikings, and he picked up a bunch of props when he was out filming. He’s got a couple of shields and an axe. I had no idea that props from that show would be so popular. At the moment, Friday night, the shields are kind of at £2000, £3000 marker, each. It’s crazy. Some things are still twenty quid.

The response from the musicians that I approached and sports personalities, has been absolutely extraordinary.

Tell me about the International Rescue Committee?

It was charity in the 1930s, inspired by Einsteins, it was his idea to start an International Rescue Committee (IRC) to help those Germans citizens being persecuted by the Nazis. It evolved, and now there are about 3000 staff and they are wherever there are refugees.

There’s a lot refugees coming out of Syria, and the Middle East, they are one of the few agencies who are on the ground in Syria. The overwhelming majority of the refugees in Syria come from absolute war zones, trying to find places that are slightly safer in the country.

Are they the ones crossing the Alps?

They’re certainly the ones who are travelling by various routes. So far about 400,000 Syrians have attempted that crossing by different routes, and Syria is a middle class country and these are doctors, they are engineers. The people have tried to make the crossing are the people who could afford to do it. Those with no money are making the best the can in the Middle East.

Can you tell our readers what the the monies and resources raised in this auction will be used by the IRC to provide for the refugees?

Well, in general, the better we can make the conditions in the Middle East, the fewer people are going to risk there lives trying to cross into nothern Europe. No one wants to make that journey, the refugees want to go home.

The conditions, given how many people have already left Syria being 4 million, and in the neighbouring countries where one in four people is a refugee – is dire. One in four people is a refugee now, not just in Syria but from various conflicts in the region and these countries just can’t cope. These countries weren’t rich countries to start with. They can’t cope and the refugees can’t cope because there isn’t the work for them, there aren’t the schools, there isn’t the infrastructure to support millions of people who are moving from one country to another in a very short period of time.

They want schools for their children, they want access to health services, they want jobs, they want ways of earning a living so they can support their families. That’s the kind of thing that the IRC are doing; coming up with innovative ways to support displaced persons. They’re coming up with schemes for refugees to build and rebuild the infrastructure of the places that they are living in, retraining people and then the kind of more obvious medical services.

It is very hard for refugees to register as refugees, that’s how overwhelmed the services are. There’s an international route laid down by which refugees are supposed to be able to register and access all the services themselves. If they’re not registered, in general, the host country won’t even consider them.

Do you have any comment you’d like to make about the Parliamentary debate on air strikes against Syria the other day?

Is there anything else that you would like to put out there about this whole crisis?

Not really, I’m not in the game of telling people what they ought to be doing, and this Star Boot Sale isn’t a poltical campaign for anything, it’s a money raising campaign. I’m hoping it is. Hopefully we’ll raise enough money by this online auction and by what we hope to do in the spring to actually make a bit of a difference.

Frankly, budgets are falling at the time when of need is increasing.

In the early days of the Syrian refugee crisis everyone was very generous, goverments and charities etc, but obviously money runs out. Aids budgets are about 30-40% of whats needed, so somehow we have to plug a gap. I mean it’s shocking to see how quickly a kind of functioning middle class country, albeit run by a despot, can collapse entirely, and we can only imagine, we can only recognise ourselves there some time ago before all this.

We could have seen our own way of life kind of transported on there and now 11 million of the citizens of the country have packed up and fled. It’s dreadful beyond imagining, the kind of conditions that is prompting a search for a place of safety.

To find out more and participate go to the Star Boot Sale.

Interview by Harry Mulligan. You can find more of Harry’s pieces for Louder Than War here.