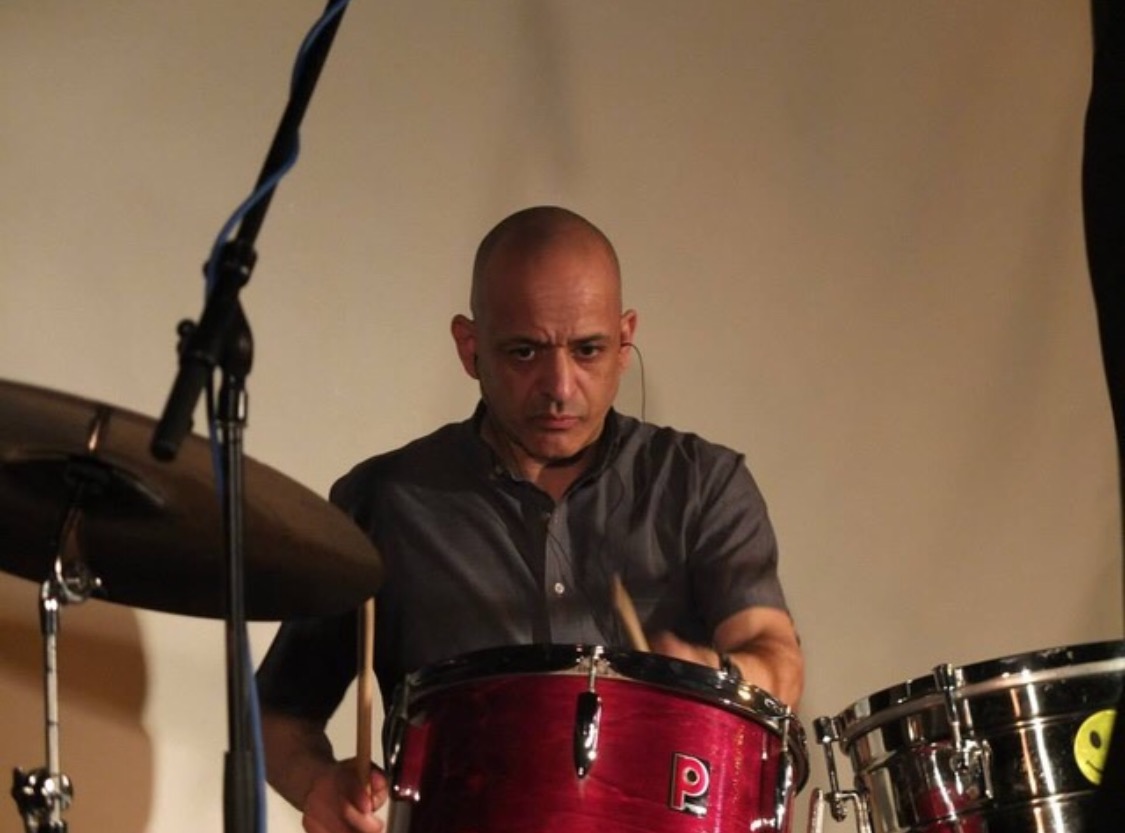 On a warm, cloudy, dimly lit grayish December mid-day, deep in the heart of London, I sat outside a Starbucks with internationally prominent drummer, Dave Barbarossa. Having just come off of a six week tour with “Fine Young Cannibals”, yet very much in the holiday spirit I spoke with the world renowned drummer regarding his childhood, his music, his book, and his days with Adam and the Ants, Malcolm McLaren and Bow Wow Wow…. 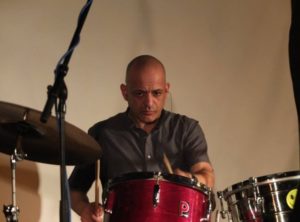 As one of the iconic punk rocker Adam Ant’s early Adam and the Ants band members, Dave began his career in the depths of the underground, playing on Adam’s monumental album “Dirk Wears White Sox”, released in 1979.  After promises of stardom and fame from notorious promoter/manager Malcolm McLaren, Dave left the Ants and went on to achieve recognition in the sensational group Bow Wow Wow, known for songs including, “I Want Candy”. Adam Ant continued as a solo artist and recorded  “Kings of the Wild Frontier” which became a land-mark album, altering the course of music forever and branding him one of the most celebrated superstars to have ever emerged.

Barbarossa became one of the most sought after session musicians in the world while also playing with impressive acts including: Beats International, Adamski and Republica. He has recently written an autobiographical book entitled, “Mud Sharks”, which is very successfully creating a huge buzz.

In April 2014 Barbarossa was reunited with Adam playing drums in a historic ‘Dirk Wears White Sox” concert at the Hammersmith Apollo Theatre in London. I deem myself very fortunate to have been there….considered by many as one of the best drummers in the entire world, this is Dave’s story…

Louder than War: So should I start with Adam and the Ants?

I started with Adam in 1977. I was living with my first wife, I was half homeless, half feral, and I knew a guy called Mark Ryan, “The Kid” as he’s known. He played for the Ants, and he called me and said their drummer couldn’t make it, would I stand in for Adam? I’d never played a gig before, I had no idea what it was all about. But, I just had this idea, I thought “let’s see what happens with these mad punk rockers, let’s see what it’s all about”. So I turned up, I picked up my little drum kit, and there was Adam and Jordan standing in the doorway….I went in the van with them, raging and furious and beautiful, and Jordan trying to calm him down, and Andy, enigmatic and silent, it was a crazy thing. Then he just said, “keep up, keep up”, that’s all he said to me. We got on the stage, counted 1,2,3,4, and I just bashed it out,

You know what, I wasn’t nervous. I’ve got a kind of reckless streak in me that doesn’t care.

Was Adam nice to you?

He was better than nice. He was a hero. He was heroic. I was with Adam two or three years, and we made “Dirk Wears White Sox”, “B Sides” and all that stuff… It was great. Then he asked Malcolm McLaren to produce a video for him and he came down and saw Adam Ant….he saw a man in Adam Ant that was replete. Adam didn’t need guidance from Malcolm, he was his own Malcolm McLaren. But he saw me, Matthew and Lee and decided “he could do something with these boys” and he lured us away with all promises of richness and nonsense. To be fair it was time for me to move on. Adam had been a great father figure and hero for me but Malcolm promised me my own band.

Malcolm was a little out there?

He was brilliant and crazy, a thin line.

It was a fantastic adventure. It was very experimental musically, very bold, a very pioneering style of playing, and a really good thing while it lasted. It was always going to shine brightly and then fade, something like that, and it did. What a great laugh it was to do. We played some great music, we played some great gigs, especially in the states.

What are you doing now?

Well now I just finished touring with Fine Young Cannibals. He’s fantastic. He’s got a beautiful voice, he’s a really good guy, a fantastic musician…We were just on a British tour. Are you aware of the book I’ve written called “Mud Sharks”.

I was not, but tell me about it.

I should send you a copy shouldn’t I? It’s a book based on my childhood. I was in a band called “Republica”, remember the song, ” Ready to Go”?

Yeah. I’ve been thrown out of some great bands Eileen…that was a hard grueling tour. So after I finished with Republica I decided to write, and they said you should write what you know. So I started writing about rock n roll, and all that. But it was a bit bland. Everybody knows what goes on in rock-n-roll. We know that life, don’t we? What I really did know was my childhood in London. It was a very tough time in London, I came from a very rough family.

What part of London were you from?

I was from Hackney. It’s a very famous old borough. So I wrote about my childhood in school, all the bullying and racism, all the things that went on in the 70s in London.

Yes, I was and deservedly so you might say. The book is about the environment in London in the 70s, very austere, very servitude, and dark. It’s about a young boy who finds salvation in the drums, and he goes on tour and becomes famous, and then it all falls apart. Anyway that’s what “Mud Sharks” is about. You can get it from New Haven Publishing, and I think you can get it on Amazon as well. Anyone who likes that era or music, will enjoy the book.

What kind of family did you have?

A big, mixed race family. I just had a rough childhood, I was a bit wild. The drums gave me order, and exactness, which is what I needed. The drums saved me.

Do you think they can make a movie from the book?

I think they could make a great movie. It’s the classic story of a young boy that was saved from a dreadful childhood by music, by the drums, by punk rock. He finds salvation, he gets to the top and it all collapses , and then he finds redemption in the end. Instead of using the sticks I used words.

How did you learn to play the drums?

I’m self-taught. I just had a real passion for it. I really give it my everything, and I work very hard. I used to watch the Andy Williams show. Karen Carpenter used to play on that see-through drum kit. And that was the first thing as a very little boy why I liked that instrument. Maybe it was an attractive girl playing on it, I don’t know but it certainly was the first hook into that world. And then of course the music around Hackney at that time, the glam rock sound, and also there was a lot of soul and reggae around. It was a very ethnic area. So I developed a style because of that music, and then Adam gave me a break. He saw something in me.

If you could give your younger self advice, what would you tell yourself?

Just because you’re pregnant doesn’t mean you have to marry her.

How many kids do you have?

Four, I have an eleven year old granddaughter.

What is your proudest moment of your career?

You know what, it’s everyday I do a gig because everyday that I play, and I play well, I still feel that fire in my belly, I’m proud of myself. You can play the big shows with Adam Ant, or Republica, or any of those bands, it’s a thing to do. It’s an accomplishment, and when people say you’ve done a good job…you say “yeah”.

If you could say anything to your fans, what would that be?

What they see is what they get, 100 percent. I don’t cut corners.

You’re a new edition to a crayon box, what color are you?

Is your glass half empty or half full?

If you could begin your career all over again, is there anything that you would change?

Aside from the marriage and pregnancy thing, not really.

I don’t mean to be clever or obtuse, but it’s a fantasy to be on stage anyway, isn’t it? I mean it’s an absurd thing to do just to be up there. I’m humbled as I said earlier, every time I go up there. It’s a fantasy to think I can still do what I do. So I guess my fantasy is my reality.

That was one of the most prolific answers I have ever had.

Oh good, I thought you were going to give me a slap.

No, I actually love that answer. Is there anything else that you’d like to talk about that we didn’t cover?

I’d love to come play in New York. There is also some other things I might be doing as a main show idea, all the songs from all the bands I’ve been in plus reading from my book.

I have many heroes. Well Adam Ant is our mutual hero, isn’t he? We love Adam.

I want to thank you for your time and for talking with me. In a way you’re my fantasy.

Well now you know I’m just a regular guy who just got lucky. Aa golfer Gary Player once said, “The harder I practice, the luckier I get”. You meet some shitty businessmen, exploiters, and those sort of people, but musicians, the people who make music are decent.