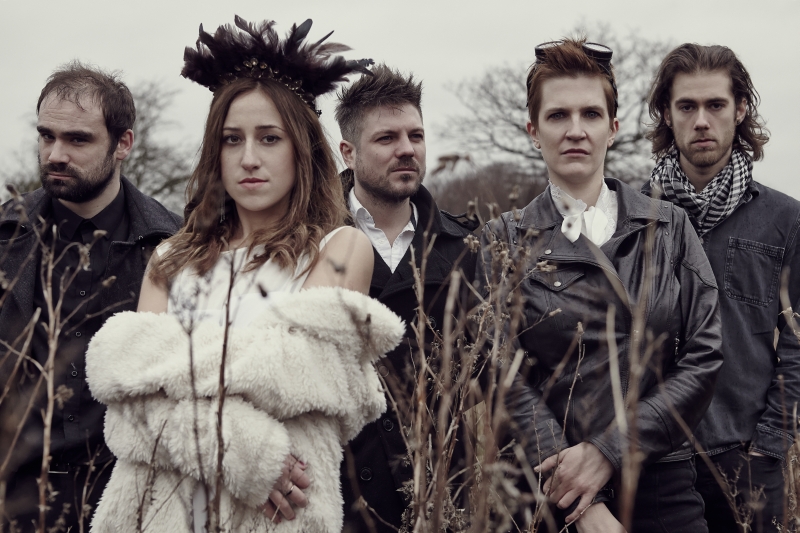 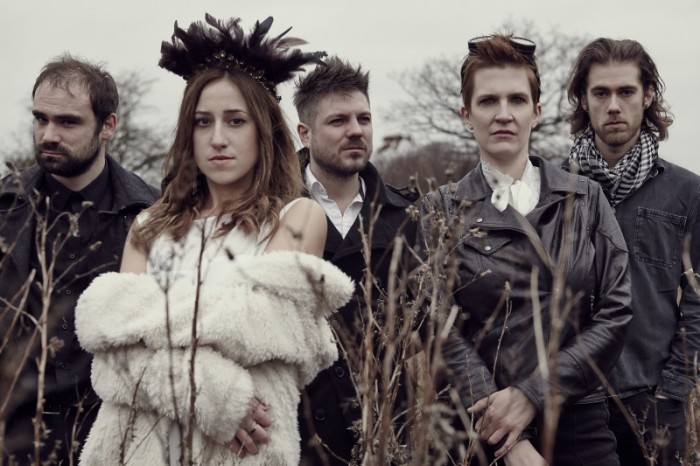 Sometimes a special band comes along, with a uniqueness about them that proves hard to ignore, thus: Darla and The Blonde. Their new single is set to be released on March 18th, and is titled, “End of the Party”. This will be followed shortly by a five track EP.

Louder Than War: You appear as a very creative and unusual band. Perhaps you could give us a bit of the group’s history, where you met, how you got together etc.

Nina: I had some new songs and wanted a female vocal with an authentic, powerful, but flexible voice – and found that in Jen. I also wanted some great musicians to add something cool but undefined.. and Jen handily knew Rob (our lead guitarist) and Tom (our drummer and producer), who both wanted a new project and could help with structure, arrangement and dynamics.

Jen: Our band is like a dysfunctional family. Nina is like the mum keeping us all together, then there’s the others… Rob & Tom live together & fight like cat and dog despite being reluctant best mates. Craig (our bassist) is the most recent addition, having been in a band with me years ago, so being my first port of call when a new bassist was required.

Nina: I think it’s one of those things where the right people came along at the right time, and all helped to create Darla’s sound using my melodies and words as a foundation.

The vocals and the music of your new single are so relevant, clear and amazing…what was the inspiration behind it?

Nina: I wanted a proper protest song, and the Umbrella Revolution in Hong Kong in 2014 came along & inspired me to write End Of The Party. Cream’s Politician was an influence.

Jen: A lot of our lyrics have imagery in which we feel is as important to our style as anything else…for instance in End Of The Party, “Even ivory coloured doves reach for the thorn from time to time“.

I noticed some dates for up and coming performances, do you plan to tour more extensively in support?

Nina: We’re working out gigs for this year at the moment, looking for the right opportunities, and that includes the right support slots. We’re reaching out to touring agents and so on. We want to play more to our audience, who we think are probably rockers with a creative, offbeat bent, who like a good minor chord.

What are the band’s musical influences?

Jen: Rob has been in a few punk bands but is a big jazz fan, I’m heavily influenced by PJ Harvey and Patti Smith but with a vocal style probably more similar to Stevie Nicks or Joan Jett.

Nina: I love dark songs that transport you either in atmosphere or narrative… Nick Cave is a touchstone. I also love a concept…  I’m a fan of Midlake’s Van Occupanther or The Decemberists Hazards of Love. Tom’s a big Smashing Pumpkins fan. Basically Tom and Rob take my folky oddball ideas and smash a load of grunge on them. Craig adds his melodic bass and Jen does her feisty thing over the top.

Who thought of the name of your group, and where did it come from?

Nina: Darla is the name of my Epiphone semi hollow guitar, and The Blonde is my Blues Junior Fender. I guess I was pretty excited about going electric.

Jen: It confuses people as none of us are blonde, or call Darla.

If you could play anywhere in the world, where would it be and why?

Jen: I don’t think we’d be complaining at any good ​​festival…..maybe one like Primavera, where Radiohead and PJ Harvey are headlining this year.

You seem to be a fusion of several different genres, goth, pop, dream pop, alt., what do you consider yourselves?

Jen: We have had a good laugh over some of the genres we’ve been put in. Prog rock was a personal favourite. Our songs are quite different, some more dream pop some more alt rock, so I guess we’re both of those. I don’t think we’re very goth.

Nina: Not goth in the wearing-black-eyeliner sense, no, but we have a dark drama thing going on. But I think alt rock sums us up pretty well. I love the challenge of writing songs in different styles and then seeing if the band can turn them into something that sounds Darla-esque… dark, ballsy but a bit out there. I do love a bit of prog though. I aim to get us all playing 10 minute odes to whale song.

Do you have a specific message that you hope to get out there using song and music?

Nina: I think it’s mainly about what interests me to write TBH. A lot of my writing is inspired by interesting and inspiring women who have otherwise been lost to history. Or human themes I’m interested in. Our song The Article is on the face of it about murder but is really about how lies can destroy lives. It’s about the layers… there’s stuff in there for the brain, but if you just want to rock out, there’s also a simplicity.

Jen: It feels good to instruct the drummer to simply ‘twat it’ sometimes! That’s what music is about, rocking out. It’s more about us and our likes I think, not trying to give anything to the audience. We’re not that selfless.

Nina: This year is about getting more established – playing good gigs, getting reviews and interviews, and getting heard. We’ve got a new Russian inspired folk-blues drinking song that we might release. Next year we’ll do an album, and I hope get going on the festival and touring scene.