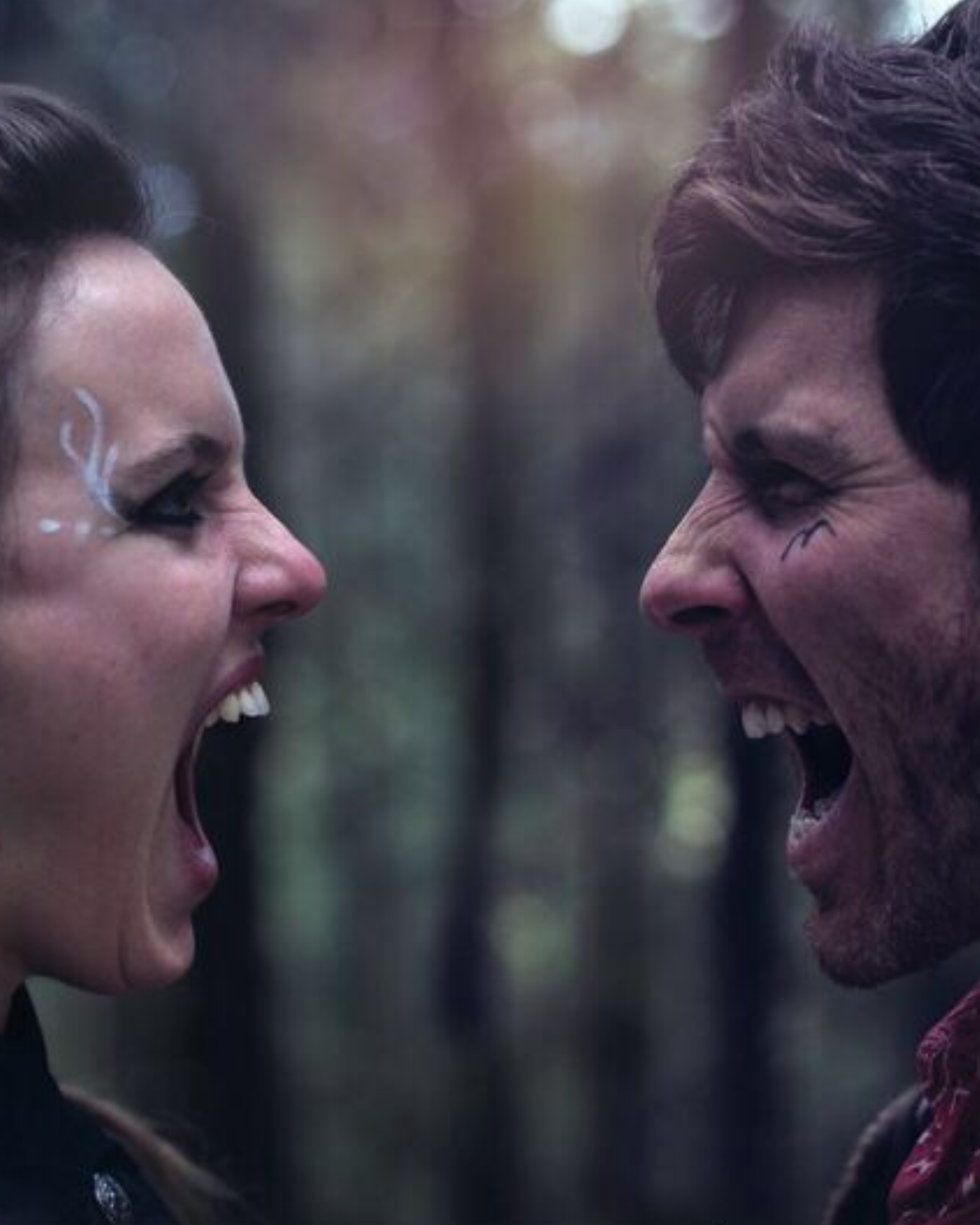 Louder Than War’s Eileen Shapiro speaks to Daemon and Airdrie.

Daemon and Airdrie’s debut single China Shop has everything a song needs and more. It’s emotional, passionate, sensible, deep, beautifully executed, arranged and produced, haunting, mysterious, and inspirational. When I listened to the song for the first time, I felt suddenly moved, but also quite relaxed. 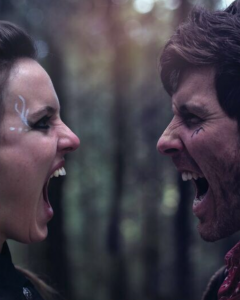 The British Columbia, Canadian duo are composed of Marley Daemon, on keyboard and vocals, and Jesse “Airdrie” Thom on vocals, guitar and beats. This couple has toured internationally, for the past eight years with the folk trio Dirty Grace until they decided to take it on their own, together. The two bring human touch and heartfelt soul to the electronic world, through the honesty of an undeniable, chaotic, romantic relationship. Their lives together create a destiny through their music and lyrics.

Speaking to the two, you could never realise that they have survived an actively open relationship, dealing with lovers coming and going, jealousy, rage, heartache and everything else that comes with it. They seemed very grounded and in love.

Louder Than War: Your new single China Shop, is very unusual and kind of addicting. Who wrote it?

Marley: I wrote the lyrics and the music, and then Jesse helped arrange it.

Is that how you do all your songs?

Marley: Mostly, it’s usually one of us that composes the original song, and then we work on the arrangement together, and add parts.

Your songs are very emotional. Is that on purpose or does it just happen?

Marley: I think for both of us we kind of source our songs from our emotions, from the inner-life of our bodies, and we are both very drawn to those minory, heart-stretching, melodies. We both are drawn to very emotional songs.

Jesse: We really like music where you feel different after you’ve heard it. So that is the kind of music that we like to write. Something that sort of alters how you feel about yourself after you listen to it.

You are kind of right. I don’t know if it altered my feelings about myself, however, it definitely affected my surroundings. You two toured with another group for a while, correct?

Jesse: That’s right. We had a trio called Dirty Grace.

So you have a history.

Jesse: It was almost a ten year history.

Are you two a real life couple?

Jesse: We are, we’re actually married.

Oh, you’re married! Does that make life interesting? Is that a good or bad thing for your career?

Marley: I think that ultimately so far, it feels like a good thing, because we are really good at acting like a team. Because we’ve been in a relationship for so long. I think it also gives us a lot to work with musically together. One because we are very connected and also because like all couples we have lots of issues that arise between us, that gives us extra inspiration to work with.

Jesse: Also, you hear a lot about musicians that really miss their partner when they are on the road. For some musicians it ends their career. They just can’t handle the time apart.

Jesse: yeah. Especially when they have children. It’s a lot to leave home for that length of time. It’s a strange job that way. So it’s nice that we are doing it together, because then we’re both on the road. If we have a child one day, maybe we’ll bring our child on the road with us too.

So you’re married, you’re having let’s say dinner and one of you gets an idea for a song, so you get up right in the middle and leave the table? How does that work?

Jesse: Yeah, that definitely happened. Yesterday we were on an airplane, we were flying in from Colorado, and Marley went to use the bathroom. While she was gone I was singing a new song into my phone. So it happens all the time, just when inspiration strikes. We let each other follow the inspiration.

Marley: We understand if the other one wants to lock himself into a room and work on a song all morning.

Jesse: Like the ultimate gig you’re asking me? That’s an interesting question. I think both of us really long to share our music with a lot of people. There is a lot of really beautiful festivals that happen, all over the continent now. Particularly on the West Coast. We know of those because we live out here. We’ve always dreamed of playing on a big stage at an outdoor festival that kind of incorporates the values of connection and community and love and caring for each other. That’s sort of what we are about, and it would be beautiful to be able to play to a large community of people who share those values.

How do you feel that your personality reflects in your work?

Marley: Both of us are meditation instructors, and studying to be therapists. We are very interested in the inner worlds and human psychology and spirituality. So I think for both of us that interest really informs my songwriting. For myself, my motivation is to draw people into more connection with their bodies and their hearts and in there feeling life through my songwriting.

I can feel that.

Jesse: I’m the space cadet in the duo. I’m pretty spaced out most of the time. You were asking about how our personalities appear in the music, there’s a lot of spaciousness in the music. I really like that and contribute a lot of that. Marley is very oriented towards relationship and emotion, and so she holds that piece in.

Do you two fight?

Jesse: All the time. Just before you called.

Tell me a little bit about China Shop, and what it’s meant to be about.

Jesse, is that ok with you?

Jesse: It is ok with me. It’s really interesting and fun to sing such a song. I sing part of Marley’s lyrics. It’s written basically about this other man.

Jesse: Yeah, it’s a good question. I think I really value Marley being able to express everything that she goes through. It’s important  to me as her friend and as her husband to really make room for everything that she experiences. So I’m happy that she’s able to put that into song, and I’m happy to support her journey with that emotional process, by contributing my own voice. It’s unusual, and I feel pretty lucky to do that.

Marley: I just wanted to add an extra piece about being a couple in a band. For myself I think there are probably a lot of couples who play music together, but sometimes feel limited as to what songs they can sing together, or what they can express. They may be worried that their partners might not be ok with them singing a love song about somebody else. I think this is actually the first time where Jesse sings lyric that I wrote about somebody else. I think for both of us, I feel like it’s a very radical experience, and because Jesse is so open to the fullness of my expression, I feel very permitted to be in a band with him musically.

You’re style is very cool, I want to say almost relaxing. What kind of impression do you want to leave on this earth?

Just listening to your song, I think you can handle the deepens of the question somehow,

Jesse: We appreciate that. The impression that I would like to leave on the earth, I work a lot with kids. I see what kind of things they struggle with. Not just their own stuff but the situations that adults create for them, in their own pain and confusion. That really affects me. It hurts my heart. You know there’s a kid in all of us. The human situation really hurts my heart. The way that we hurt one another, I feel really inspired to bring more warmth, and more understanding, and some clarity to the situation, because I think we hurt one another. Not because we want to,not because we’re evil, it’s just because we are a little bit confused about what’s actually happening here. I would love to bring more clarity, more relaxation through the music and more dancing.

Marley: What I want to do is create environments of permission through my performance in which people can really feel what they’re feeling. I think that’s what this planet needs right now, is more permission to express ourselves and connect deeply with our existence of human beings and less oppression and judgment. I want to create more freedom.

Is there anything that you would like to promote?

Marley: We’re going to be releasing another song every couple of months until we eventually have a whole album together, which we plan on releasing next year.