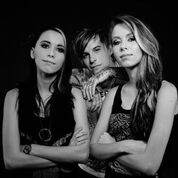 The Three piece, Canadian, punk band, “Courage My Love”, is about to embark on a UK/European tour, this May, supported by “Over”.

Discovered in a local “battle of the bands” contest, the trio has proven themselves a million times over with their explosive live performances. The faction consists of Mercedes Arn-Horn, on guitar and vocals, twin sister Phoenix Arn-Horn on Bruma and vocals and Brandon Lockwood, on bass and vocals. Currently the trio is putting the finishing touches on their new album, set to be released this year, on “InVogue Records”.

Louder Than War found out what the excitement involved on their upcoming tour, as they cannot wait to meet their UK fans.

Louder Than War: You are an amazing band, you most be very excited for your UK tour. What can fans expect?

Thank you! We’re definitely very excited. And as for what to expect, you’re just gonna have to come out to a show and see for yourself haha! We like to switch things up in our live set so it’s not exactly like the recordings you might’ve heard. We definitely like to have fun when we play and we try to reciprocate that feeling to anyone that comes out to our shows.

It’s mostly Mercedes and myself that take on the writing in the band, although we all contribute in different ways. All our songs usually come from real life experiences, either from our lives or our friends lives.

Do you feel as though your music acts as a lifeline for people you will never meet?

We’ve gotten messages from people over the years from different parts of the world who say that listening to our music saved their lives. It’s so incredible to hear and it blows our minds because truthfully we never expect anything we write to mean that much to anyone other than us. It’s such a beautiful thing because music can inspire the best in you, an album can get you through the hardest nights of your life and if one of ours somehow manages to do that for someone then it makes me never want to give up playing. The truth is though, when someone overcomes a hard point in their life, they did it themselves and I don’t think we as a band can take credit for that. If something we write helps someone find that inner strength, then that’s absolutely humbling and it’s the reason why we stay motivated to do what we do. But our music is just the SOUNDTRACK to that person’s recovery; they were strong enough to overcome their obstacles all along.

Do you have a particular song that you enjoy performing?

It’s really hard to say, I think we all have ones that personally speak to us. But songs are like your babies…you can’t pick a favorite!

Thus far what do you consider to be the highest point of your career?

It might not be considered a huge accomplishment by some people but one of the things I’m most proud of personally was being nominated for a Juno award. In Canada it’s like being nominated for a Grammy. It was a huge huge honor that didn’t even feel real. We totally didn’t feel like we belonged there, in fact we thought people were joking the day we found out about our nomination, and it was AWESOME.

We’re working on finishing our first full length album right now which we’re hoping to have out later this year. It’s been a real learning curve for us as a band and as song writers; we’ve tried really hard to step out of our comfort zone creatively and I can’t wait to share it.

Any plans for a US tour?

At the moment we’re really focusing on finishing the album, but we’ve got lots of tour plans in the works and we’ll definitely be playing some US shows in the near future.

18 May: Oxford – The Bullingdon

23 May: Southampton – The Joiners

24May: Chellenham – Frog and Fiddle

26 May: Folkestone – The Harp Restrung