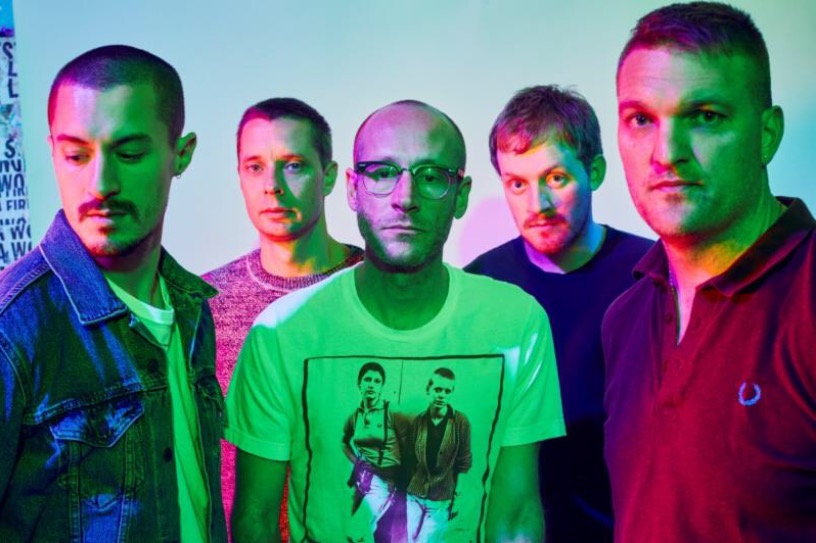 This band is a big deal! Soon to become a bigger deal after the release of their newest album entitled, La Divine, out today (7 April 2017). The soulful lyrics and sonic reverence of the release is overwhelmingly compelling, addictive and even mesmerising.  Louder Than War’s Eileen Shapiro interviews. 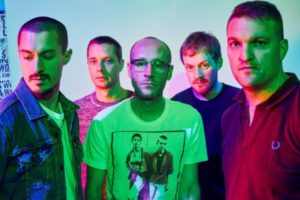 Brilliant frontman, songwriter and sometimes staunch Angeleno, Nathan Willett, explained the inspirations and attitude regarding the new release, and the thought that went into creating it. His answers were completely captivating. Other members of the band include: Matt Maust, Joe Plummer, Matthew Schwartz and David Quan.
Louder Than War: First congrats for being on Jimmy Kimmel this week. I heard your album and was floored by it, tell me some of the inspirations you based the release on.

I think there is a lot going on there. I think that LA is a little bit of a back drop for some of the stories that are going on in there. There are relationship songs that I think are very specifically. I wanted to set out to do something that was both emotional but hopefully not falling into the categories of the emotion of a break up song, or the excitement of the new love song. More like the emotion and feeling experience of the more heart wrenching, long term relationship stuff that is both very helpful but kind of acknowledges all of the real stuff, the hard stuff. The sacrifice and everything that you make in relationships, like  Restless and Can We Hang On, Part of the Night.

There is definitely a good chunk of that , LA divine side on it. For me, having grown up all around Southern California, and having always had an image and idea of LA, and seeing it changed over the years, I wanted to try to recontextualize, and reinvent some people’s impression of it. As we toured and as we traveled, we saw just how much they love or hate LA and their idea about it. In some ways I feel like it’s like everywhere else, and then I think in other ways it’s the most drastically weird, screwed up, upside down place. So, I wanted to put a lot of that in a blender and kind if run with it.

I fight with all my LA friends all the time, being from New York.

Yeah, it’s an eternal debate. Even like the Woody Allen depiction of  a true New Yorker that sees LA as just kind of being yoga, hemp, and shallow people. There is a degree of truth to that. I love the clichés, and I love trying to show another side of it that does have more depth.

Good luck with that when you come to New York.

I hadn’t really thought about that yet.

How do you feel that your personality is reflected in your work?

That is a great question. I don’t know how to answer that. I don’t know if that’s a good thing or a bad thing. I always think of the biggest personalities that I love, whether like a David Bowie, or a Morrisey, that have these huge personalities..I love the process of writing and recording and performing, but I don’t feel like I have that huge personality that demands to be loved and followed. I should know how to answer that better.

I think that you’re being very honest.

There is an element of fiction in songwriting that i think comes from the love of literature,and poetry, and there is a side of it for me, in my personality, and my life. I’m an observer, I love watching people’s interactions, and so that probably feeds into the thing of ‘who am I exactly’. Actually The way I’ve learned more about myself recently than ever before, is there is this thing – actually I’m going to sound very LA, very astrologyish – there’s this thing called the enneagram. This writer who I love named Richard Rohr, he’s an old Catholic monk. He writes about this enneagram and how there is seven types of people. So on the enneagram I am a four, which is kind artist, kind of selfish, self reflective and there’s a lot more to it than that. It was one of the most insightful things that I got to look at. This was completely who I am, and I never really had that before. I think because I didn’t grow up with a lot of artist culture background, I feel like I always had a creative personality, but I didn’t really understand it, or had much influence until later.

Do you recall the moment that changed the trajectory of your whole life?

I think that it was: I graduated college, I was doing student teaching at a high school. It was literature, and I remember there was a reading list for the junior class. I said that I wanted to read this Kurt Vonnegut book, Cats Cradle, and the teacher that was my boss said, ‘you don’t want to teach books that you love, the kids will end up ruining it for you’.

It was sometime around that time, that some of my friends were just starting a band, and starting to tour. That wasn’t everything, but it was a weird moment where I thought, ‘this isn’t where I want to be, this is not going to satisfy whatever the burning thing inside of me is’. It was the moment that I tried to do the responsible thing a lot, but it felt like I was too young for this. So it was at that time I quit doing that and started this band. I moved into a terrible, really cheap place, we started rehearsing, and just did everything around it.

I think that is one big difference between being 25 and kind of staring down what could be a long term job, serious life, versus a lot of people that I know, musicians that started teen touring, that never had that life experience where you learn that discipline. I’m glad that I did. That was the moment.

What kind of impression do you want to leave on the earth.

Deep. I think we are living in an interesting time, where being an artist that is in the public, there is a weird mix. We want our artist to be wild but at the same time we are seeing a tremendous new compass for how everybody has like a greater a moral sense. It’s interesting to me, where as the artists that I grew up loving just had such a different experience. Really at the end of the day, I think as we started touring, my partner whom we decided to be together was starting medical school. So I get to write and record music, but the grounding thing for me was that I am also putting somebody through medical school. Now that I have a family too, there is something really wonderful about the fact that it would be impossible for me to be a truly self-serving artist. I’m very grateful for that. It shapes the songs, and whatever I’m putting out in the world.

I asked you that question because I think your songs are really deep.

Yeah, I really hope so. I’m so happy to hear that. I do know that there was one point for me, many years ago, where I started to trip out on trying to both let the songs go where they needed to go, which was a result of my personality, and also to try to understand them, and be able to explain them. Then I realized that it was much better to not really try to understand and be able to explain them because, your exclamation goes on and on. I hope that there is a lot of depth and meaning and purpose there. I hope that it does reflect me, but I’m not that interested in it just being about me. So I realized that I’m not going to be good at explaining them, and hopefully they are good enough that is doesn’t matter.

I usually don’t ask this question, but how did you get your name?

Our bass player, he and I were friends in school. He had a website with the name Cold War Kids. He has done all of our graphic design all these years. I loved the philosophy of his website. It was about this crew of friends that we had, with poetry, painting, and graphic design…stuff that was under the umbrella of Cold War Kids. When we started playing I asked him if our band could be Cold War Kids.

I think it’s such a relevant name for now.

If you could say anything to your fans or followers, what would it be?

It’s such a bizarre time because we have so much social media, so many ways to constantly say everything, but more than ever I kind of stop and see artists that are constantly directing attention toward North Dakota pipeline, toward Trump. At a certain point you see what it is that we direct people to. You don’t want to be just about or own self-promotion, I would like to be about good things in the world. So I’m giving you a total none- answer.

Do you write most of your music for the band?

So you’re the deep one?

Luckily everyone else isn’t. That’s why it really works.

Respected. Being liked is very fickle.

Are you proud of the person that you are and would you introduce yourself to your family and friends?

Yeah, I think so. I’m the kind is person that has high standards, and I sometimes realize that’s it’s hard to live up to them. I think I’m pretty hard on myself, but in a weird way, the last record that we had, did so well. I never wanted to be an artist that put personal value on success or not success. So it surprised me when I thought, ‘OMG, I feel so good, there’s this renewed interest in our band, oh my God I’m a real musician now’. We’ve been doing this for so many years, and we’re going to be able to keep doing this.

Your utter acceptance of my floodery style is all that I need.

Cold War Kids will be performing at Rough Trade in Brooklyn New York on Monday 10 April 2017 at 7pm.