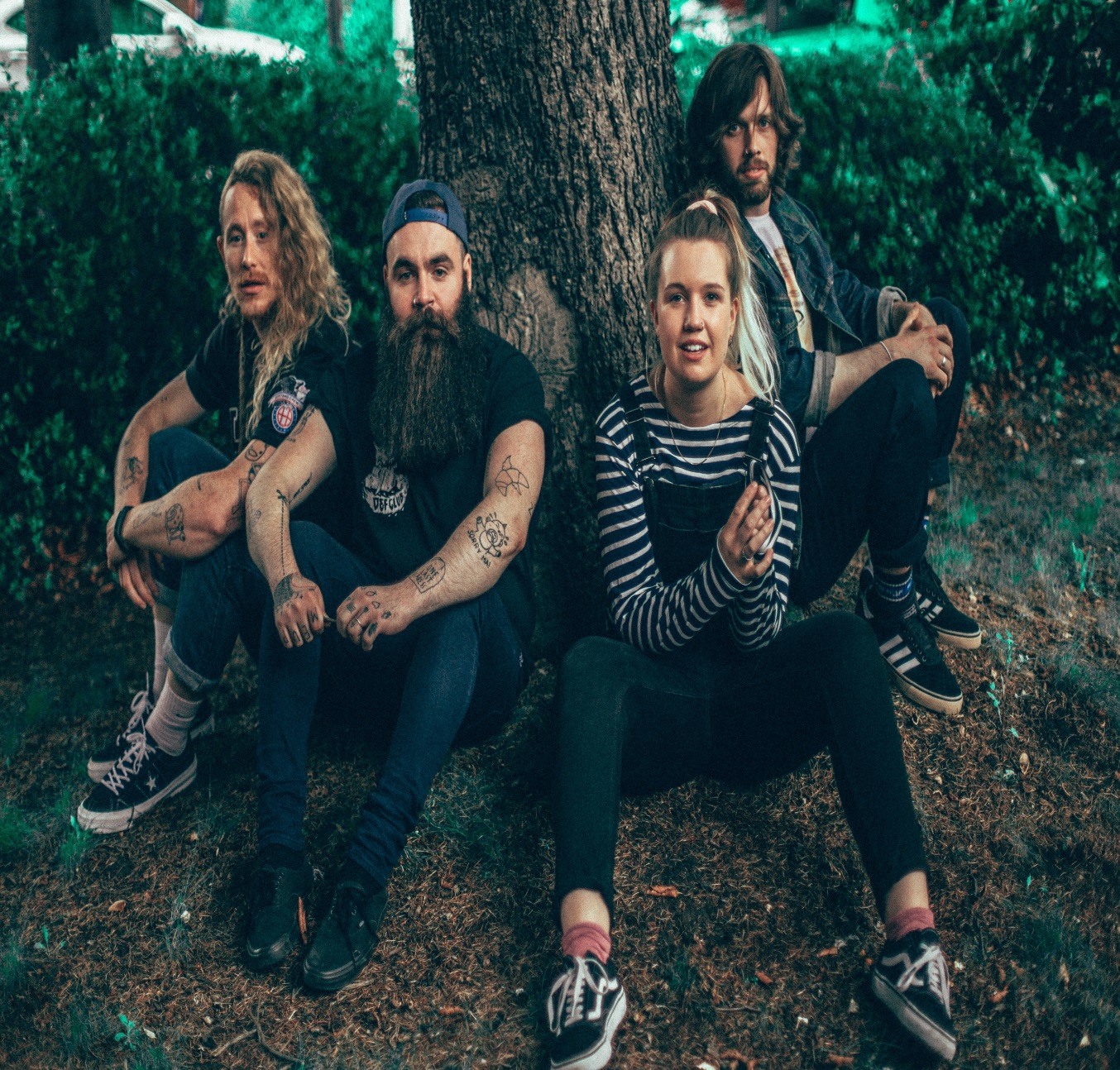 Clean Cut Kid’s debut album, Felt, came out on Banquet Records in May and their recent support slots with Michael Kiwanuka and the Kooks have brought them to a much wider, and highly-appreciative audience. Louder Than War caught up with Clean Cut Kid backstage at Leopallooza in Cornwall recently to talk about their fuzz pop, their warm, fuzzy demeanour, and their commitment (mostly) to facial fuzz. Read on to behold us planning future releases on the hoof and for a world exclusive on Mike and Ev’s ‘Beardgate’ appearance on Sunday Brunch.

Louder Than War: We’re in the immediate post-Felt era. For me, the album’s emotional – refreshingly sentimental in a good way. Mike and Ev – my Scouse grandad would have called you a pair of ‘soft melts’. Is that fair enough?

Ev: Everyone in this band is a sensitive soul, that’s for sure.

Mike: The record’s so upbeat and so full of guitar textures – you wouldn’t believe how many people actually miss that it’s a really emotional break-up record. People will say that it’s so full of life, so explosive, but they’re not taking in the content. I’m most pleased when I hear that people have taken the emotional side in.

Ev: It often hits people at about the tenth listen.

LTW: First listen for me. I heard you supporting Michael Kiwanuka in Bristol at the Colston Hall. You nearly had me welling up thinking of my parents and my brother!

LTW: What sort of tunes do you wallow in?

Mike: We like a lot of Americana, which tends to be based in sadness.

Ross: Or the deepest, darkest folk.

LTW: Mike and Ev – I believe that you first sang together on your second date. Is that right?

Ev: Yeah, that’s true. Mike wrote a song for me and, being the shy, retiring wallflower that I am, I stood up and started singing harmonies with him.

LTW: Had you heard each other sing before?

Ev: We’d both been at the same uni, studying music, but two years apart. We never really knew each other. We’d both seen each other play and sing with other bands.

LTW: I assume that moment was emotional and refreshingly sentimental.

Mike: I don’t know what kind of emotions I was feeling, I was on such a rollercoaster. Not only was it a second date, but Ev lived in London and I lived in Liverpool, so the dates were epic. There was a four-hour Megabus journey down. At the time, the money didn’t even allow me to get the train.

LTW: Megabus! How times have changed.

Ev: And Mike’s songs are emotional, but they’re not gushy, so they’re never over-the-top or cheesy. I cried at the song, because it felt real and it was really vulnerable singing it on a second date. It’s a great song. We all want it to come out – hopefully one day. It’s called “Piccadilly Line”.

Mike: It’s just one of those tunes that’s gone by the wayside so far. We’ve never even jammed it as a band.

Ev: Me, Saul and Ross have… (they exchange various looks)

LTW: Everyone that talks about your music always manages to mention some kind of mid- to late-80s tinge. Is it self-consciously there? Does that labelling get on your nerves?

Ev: I’m not offended by it at all.

Mike: I love 80s culture. I was born in ’86, but I really feel like an 80s kid, because my brother is ten years older, so through the 90s, my brother was still obsessed by the previous decade. We recorded “Runaway” and “Vitamin C” eighteen months before we were even really a band and before the record deal, and the reference track for “Vitamin C” was “In The Air Tonight”. When we sat down to plan the record, we were designing it around “Vitamin C”, so the whole thing had to work around this 80s vibe. I don’t think the next album’s going to go there.

Ross: A lot of people romanticise the 80s too and a lot of good 80s films are about break-ups, so it fits.

Ev: He’s married to my best friend, and she was on tour with him at the time, so that was really cool. He is just the loveliest man.

LTW: Is that how playing at his wedding came about? What a CV point!

Ev: His wife and I grew up together. She’s a singer as well and she sang at our wedding. We’d always said that it was something that would happen. She wanted us to do a Clean Cut Kid song, which was nice. Someone came up to Mike afterwards, some producer I think, and said, ‘I love that tune, “Vitamin C”, who’s it by?’

LTW: Does it all feel like it’s happened rather quickly?

Ev: It does when we look back. I got a notification on my phone saying that our first Liverpool gig was two years ago yesterday. That was our fifth ever gig.

Ev: When you look at it on paper, it’s happened quickly, but it feels like a long time.

Mike: We can do so much in three days that it can be a Sunday and we can’t believe it was only Friday that we left and we’ve done five gigs, twenty interviews, three more on the radio. You’d swear you’d been on the road three weeks. It doesn’t feel like it’s been ‘overnight’ quick, but we’ve only been gigging for two years and if you take this festival, for example, we’re on one slot before headline. It’s something that we’ve got here in that time, having started not long ago without a single fan.

Ross: Except our mums.

LTW: Do your mums still come to the gigs?

Ev: A lot. My mum and dad come in opposing Clean Cut Kid t-shirts, one black and one white. They’ve got caps and jackets now too, so they’re totally kitted out.

LTW: Do they stand at the front and put you off?

Ev: They stand at the back. Dad literally films every minute of every gig.

LTW: At least at gigs, you can always drown your parents out.

Ev: I have heard my mum whooping several times. She’s got a distinctive high pitch.

LTW: And no-one but you knows that it’s her.

Ev: She’s been coming to see me since I was thirteen, even in bands she was blatantly never going to be into, so I do like having her there.

LTW: If you were to make an EP of great Liverpool tunes, which tunes would you pick? One pick each.

I didn’t understand what that was about when it first came out.

LTW: May I politely decline your kind offer…

Mike: The Beatles are my favourite band, but it’s too obvious to say them, so I’m gonna say “The Killing Moon”.

LTW: I look forward to this being recorded. How’s the festival season going?

Mike: Great. More busy than we thought. Originally, we were trying to do a chilled one, because we’ve just built a studio in Liverpool and we’re recording the next album ourselves, so it’ll have a totally different vibe. We were going to take time to start that process, but we’ve wound up doing about twenty festivals. We did thirty-two last year.

LTW: New studio? That’s exciting. Where is it?

LTW: You came down to Cornwall from Y Not in Derby. Sadly, their Sunday has been cancelled, but what was the Saturday like?

Mike: Amazing. You couldn’t have crammed any more people into the Main Stage area.

LTW: What are the best and worst things about festivals for you?

Ev: The worst thing for me is that there’s never anywhere that you can get five minutes of absolute silence. There’s always noise.

Mike: No silence and nowhere to sit quite a lot of the time. The best thing about festivals is people’s attitudes. I wish it was what people were like when they were going to work on Monday mornings.

Ev: They’re making the most of festival life because they’re only there for three days.

LTW: The first time I saw a picture of you lot, I was convinced you were a metal band…

LTW: But there is that tender jangle that you possess. How rock and roll are you?

Saul: I go to bed at eight o’clock.

Mike: Depends on your definition.

Mike: We eat, sleep and breathe playing music and that’s what we think matters. We’re definitely not big drinkers. If you party, then the next day you can’t make music well, which sounds boring, but we’re into making music.

LTW: What about making Sunday Brunch on Channel 4 and that ridiculous tabloid food-hygiene furore? I assume there’s no such thing as bad publicity?

Ev: It was hilarious. We were buzzing.

Mike: Nobody washes their hands on there anyway, so there’s one thing. And in terms of the nets people said we were supposed to be wearing, we were never meant to be cooking. I’ll give you a world exclusive here, Esther Rantzen pulled out of what she was supposed to be doing seconds before, so they just grabbed us and dragged us into the kitchen. She was super, super lovely, but she just said, ‘I’m not going to do any cooking’.

Ev: Just before they were going live.

Mike: They were counting us down to go and Tim Lovejoy said, ‘Look at this card. These are all questions for Esther Rantzen. I’ve got nothing to say to you. When you’re cooking in the kitchen, we’ll be making it up as we go along.’

LTW: Did he ask you about presenting That’s Life and about your work with Childline?

Ev: It was great fun, really funny and it definitely can’t have been bad press.

LTW: Wasn’t there a picture of Esther Rantzen hugging Mike?

Mike: She was sniffing my beard.

LTW: That would make a great band t-shirt – maybe in luridly contrasting colours.

LTW: I was trying to think of a band with a more ironic band name than yours. It would only be worse if Ev had a beard.

Saul: The Monkees were human. Def Leppard were also human and could hear.

LTW: If you could cover a song that really wasn’t Clean Cut Kid’s genre and get away with it, what would you choose?

Saul: (Sings Kelis) ‘I hate you so much right now’… That was my suggestion the other day.

Mike: I’d love to cover the one that goes, ‘Wherever there are rats, there are cats’…

Mike: We could do what Ryan Adams did with Taylor Swift’s “1989”, but with Kelis.

Mike: It’s all taking shape as we speak…